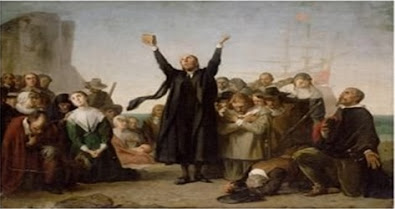 I was presenting a “Revive America” event at Abounding Grace Christian Church in Schenectady, NY when the Lord highlighted, in a somewhat dramatic fashion, the Pilgrims’ purpose in coming to America.

As I was preparing for an evening session, I sensed the Holy Spirit instructing me to have the audience repeat after me the two reasons the Pilgrims gave, in the Mayflower Compact, for coming to America.

Later that evening, at the appropriate moment, I had the words of the Mayflower Compact flashed on the large screen and asked the audience to read with me their two reasons for coming to the New World. We read together: "(1) For the glory of God and (2) the advancement of the Christian faith." We then read it a second time.

At the end of the service, a young man, who looked to be about twenty years of age, approached me with his face glowing and a note of excitement in his voice. He said,

I am attending a local community college and taking a course in American history. Just this week the professor told us that the Pilgrims did not come here for religious reasons. He said they came for monetary reasons.

He paused and then exclaimed, “But there it is in their own words!” He then stated how he was now inspired to study and teach America’s true origins. I then understood why God had instructed me to have everyone speak aloud the two reasons the Pilgrims gave for coming to America.

But even before the Mayflower Compact, while still in Holland, their missionary vision was clearly stated. William Bradford, who served as governor of Plymouth Colony for over thirty years, explained why they made plans to come to America. He said that they had "a great hope and inward zeal for the propagating and advancing of the gospel of Jesus Christ in those remote parts of the world" (Hyatt, The Pilgrims, 25).

The Pilgrims practiced what modern missiologists would call “friendship evangelism.” They made friends, not only with Squanto, but with countless other individuals and tribes. They established a treaty with the Wampanoag tribe in which they promised to defend each other if either was attacked by an outside aggressor. Dr. Samuel Eliot Morison says the Pilgrims treated the natives with, “A combination of justice, wisdom and mercy” (Hyatt, The Pilgrims, 38).

A number of natives came and lived among the Pilgrims. These included Squanto, Samoset, and Hobomok who served the Pilgrims as guides and interpreters. Living in Plymouth, they would have attended the church services of the Pilgrims.

Their friendship evangelism bore fruit. Bradford told of Squanto falling sick and dying. The Pilgrims cared for Squanto in his sickness, and Bradford said that before he passed, Squanto asked him to pray for him that he would go to the God in heaven he had learned about from the Pilgrims. Bradford described Squanto’s death as "a great loss.”

The Pilgrims’ commitment to missions has had far-reaching ramifications and contributed to America becoming a missionary-sending nation. This missionary vision, that began with the Pilgrims, became so pronounced that it caught the attention of the U.S. Supreme Court. In the 1892 ruling of “Church of the Holy Trinity vs. the United States,” the nation’s highest court stated,

The churches and church organizations which abound in every city, town, and hamlet . . . and the gigantic missionary associations, with general support, and aiming to establish Christian missions in every quarter of the globe add a mass of unofficial declarations to the mass of organic utterances that this is a Christian nation (Hyatt, 1726: The Year that Defined America, 170).

Yes, the Pilgrims were fleeing persecution in England, but that was only part of the story. They had a proactive missionary vision that was pulling them forward. They clearly stated that they had come to America, “For the glory of God and the advancement of the Christian faith.”

In retrospect, it is obvious that they were successful in their mission. It is also obvious that the modern, self-obsessed American Church needs to acquire a missionary vision of its own. After all, the Great Commission, which commands us to "go into all the world and preach the gospel to every creature" (Mk. 16:15) has never expired.

Dr. Eddie Hyatt is an author and ordained minister with a commission to remind America of  her radical Christian roots in the Great Awakening. This article was derived from his books, The Pilgrims and 1726: The Year that Defined America, both available from Amazon and his website at http://eddiehyatt.com.