WHERE IS THE CHURCH?

Being Salt & Light in Our Generation
Like many of you I am very concerned at the things I see happening in our country. When I hear continuous reports of senseless violence throughout our land, like the gunning down of a young college student by three teenagers in the small Bible-belt town of Duncan Oklahoma who said they were “bored,” I wonder, “Where is the Church?” When I read where public housing and public schools of our nation are described as “mostly dreadful, dangerous, and amoral,” I wonder, “Where is the Church?” When I hear statistics that over 70% of babies born in the black community, and over 50% in the white community, are born out of wedlock I wonder, “Where is the Church?” When I hear a liberal news commentator lamenting the violence in our culture, the loss of values and the breakdown of family, I wonder, “Where is the Church?”
Is it possible that without realizing it we have lost our saltiness—our ability to have any impact on our culture—as Jesus warned in Matthew 5:13?
You are the salt of the earth. But if the salt loses its saltiness, how can it be made salty again? It is no longer good for anything but to be thrown out and trampled underfoot (Matt. 5:13; NIV).
Jesus used the salt metaphor to communicate a very powerful truth. In the first century, before refrigeration, salt was used to preserve meats for long periods of time because salt restrains corruption and spoilage. Salt was also used for flavoring foods that otherwise might be rejected. Salt also has healing properties and all these factors made it very valuable in the ancient world. In fact, workers were often paid their wages in salt, which is where we get the expression of a man being “worth his salt.” But salt that had lost its pungency, tartness and strength was no longer of any value and was discarded.

Seeking Jesus for all the Wrong Reasons

If we are to see this nation preserved, we, as American Christians, must regain our saltiness. This means that we must move from a Christianity of comfort and convenience to a Christianity of commitment and character. This will require a shift from a faith that is centered in “me” and my desires to a faith that is centered in Christ and His kingdom, will, and purpose. But do not fear such a giving up of self for He has promised that when we seek first His kingdom, all these things will be added to you (Matt. 6:33).
There was a time when the American Church was salt, restraining evil and exerting a positive moral influence throughout society. The French sociologist, Alexis de Tocqueville, visited America in 1831 to study its institutions and discover the secret to its success. He arrived on the heels of the Second Great Awakening and at the height of the revivals led by Charles Finney. He was very impressed with the role of Christianity in America and wrote, “The religious atmosphere of the country was the first thing that struck me upon arrival in the United States” (Eddie Hyatt, America’s Revival Heritage, 83-84). Although the following quote is not found in Tocqueville's writings, it has been historically attributed to him and may have been passed along orally by someone who heard him make these remarks in a speech.
I sought for the greatness and genius of America in her commodious harbors and her ample rivers, and it was not there; in her fertile fields and boundless forests, and it was not there; in her rich mines and her vast world commerce, and it was not there; in her democratic Congress and her matchless Constitution, and it was not there. Not until I went into the churches of America and heard her pulpits flame with righteousness did I understand the secret of her genius and power.
Conclusion
I hold out a hope that the American Church can regain its saltiness as we turn to God and truly seek Him. Five years ago I had given up hope of America ever seeing another national awakening. But one day I was surprised by the Holy Spirit as for several hours my mind and heart were flooded with expectation and hope that we could see another Great Awakening—an Awakening that will revive and renew the churches of America, impact our culture, and stem the tide of secularism, immorality, and false religion that is flooding our land. I have hope that we can once again become salt and light in this world and to our generation, but we must purge our message.

If you would like to read more about revival in America, check out Dr. Eddie Hyatt's latest book, America's Revival Heritage, available from Amazon and at http://www.eddiehyatt.com/bookstore.html. Eddie is also available to speak on this topic and you can contact him by sending an email to dreddiehyatt@gmail.com. 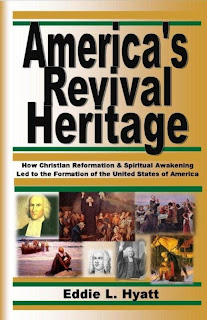 Posted by Eddie Hyatt at 6:01 PM No comments: