SHAKE IT OFF, MOVE ON, AND DON'T LOOK BACK 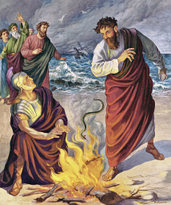 It was rainy and cold as Paul gathered sticks to build a fire on an unfamiliar island in the Mediterranean. He had just suffered shipwreck while being carried as a prisoner to Rome to stand trial. As he gathered sticks and branches, a poisonous snake suddenly "fastened on his hand." Although the natives of the island expected him to fall over dead at any moment, Paul did not panic. Luke says, "But he shook the creature into the fire and suffered no harm "(Acts 28:5).

PAUL HAD TO SHAKE OFF MORE THAN JUST A SNAKE
This wasn't the first time Paul had found it necessary to shake off something unpleasant. He had been expelled from Antioch of Pisidia. He had been stoned and left for dead in Lystra. He had been beaten and imprisoned in Phillipi. His life had been threatened in Thessalonica. He had been attacked by a mob in Jerusalem. He had been arrested by the Romans and shipped to Rome to stand trial. On the way he is shipwrecked on an island and in the rain and cold the poisonous viper "fastens" on his hand. One could understand if at this point he had thrown his hands in the air, and cried, "I give up!" or "Why me Lord!" But instead he shook it off and went on about his business and afterwards saw a great move of God on that island with many experiencing God's healing power.

WE TOO MUST SHAKE OFF EVERY UNGODLY
THING THAT WOULD TRY TO "FASTEN" ITSELF ON US
We all encounter difficult and devastating situations of life that try to "fasten" on us and poison our souls and paralyze us and destroy us. We must not allow it to happen. Like Paul, we must shake it off and move on in obedience to God. Paul himself shares a secret for doing this in Philippians 3:13b-14 where he says, "But this one thing I do, forgetting those things which are behind and reaching forward to those things which are ahead, I press toward the mark of the upward call of God in Christ Jesus." Paul was not allowing anything--snakes, hard times, people's hatred, etc.--to "fasten" on him and keep him from his future in God. You and I must do the same. After all, where we are going is more important than where we have been. So, SHAKE IT OFF, MOVE ON, AND DON'T LOOK BACK!
Posted by Eddie Hyatt at 4:12 PM No comments:

A few days ago the Veterans Administration in Houston issued an order that Christian groups participating in funerals at the VA cemetery cannot use the word "Jesus" or say "God bless you." The reason? Why, the use of such terminology would breech the "wall of separation" between church and state.

Indeed, throughout America, this twisted interpretation of the First Amendment is being used to force the removal of Christian symbols from the public square and to intimidate Christians from publicly sharing their faith. This distorted interpretation of Jefferson’s “wall of separation” has even been used to threaten students with arrest and incarceration who talk about “Jesus” in their valedictorian addresses at graduation or use His name in prayer. One Texas judge decreed that traditional prayers offered at Santa Fe High School events must not contain the word “Jesus” and warned that anyone who violated his order, “Is going to wish that he or she had died as a child when this Court gets through with them.”

This sort of anti-Christian activism was unknown before the 20th century and is fueled by the on-going efforts of a small but radical minority. Emboldened by major victories in the 1960s with Supreme Court decisions outlawing prayer and Bible reading in public schools, these radical secularists now seek to remove any vestige of Christian influence from the public square. And their weapon of choice is the promotion of a “wall of separation” between church and state that they have concocted through their twisted reinterpretation of our nation’s history.

This is all somewhat ironic because the expression "wall of separation" is not found in the First Amendemdment, but modern seularists have linked the two together in a way that was never envisioned by the founders of this nation.

The Origin of the Phrase "Wall of Separation"

Thomas Jefferson, of course, is the one who used the phrase “wall of separation,” not in the Constitution, but in a letter to a group of Baptists assuring them that the First Amendment provided a “wall of separation” that would protect them from government intrusion. Modern secularists have turned Jefferson’s expression on its head by reinterpreting it to mean a “wall of separation” to keep expressions of faith out of the public square. Jefferson would turn over in his grave at such a distortion of his words.

It was in a letter, dated Jan. 1, 1802, to the Danbury Baptist Association of Connecticut that Jefferson referred to a “wall of separation” between the church and state. The Baptists were concerned about their status in the new nation and how they would be treated. They had reason for concern for throughout Europe the Baptists had been an outlawed religious sect, severely persecuted by the state and the state sanctioned churches, both Catholic and Protestant. They had also suffered persecution for their faith in colonial America, particulary in colonial Virgina where the Anglican Chruch hd been the established "official" church.

Jefferson quoted the First Amendment, enacted Dec. 15, 1792, that, “Congress shall make no law respecting an establishment of religion, or prohibiting the free exercise thereof," and assured this Baptist association that this meant that in America there would be “a wall of separation” that would protect them and any other religious group from the intrusion of the state.
Jefferson’s words clearly indicate that he understood the First Amendment as providing a unidirectional “wall of separation” to prevent the state from meddling with the church and the free expression of faith.

This was the common understanding of the First Amendment for the first 150 years of the nation’s existence. In History of the United States published in 1816, David Ramsey declared that the founders of this nation, “Wisely judged learning and religion to be the firmest pillars of the church and commonwealth.” The modern idea that one’s faith is personal and private and not to be expressed in the public or political arena is obviously something new and novel, and unknown among the founders of this nation.

Jefferson's own actions as president reveal that his metaphorical expression "wall of separation" had nothing to do with excluding Christian expressions from the public and political arena. As president, Jefferson negotiated a federal treaty with the Kaskaskia Indians that included a stipulation that federal funds be made available to pay for Christian missionaries to work with the Indians and for the building of a Christian church in which the Indians could worship. He also closed presidential documents with the appellation, “In the year of our Lord Christ.”

Although Jefferson is often pointed to as one of the non-Christian founders, he was Christian in his thinking and held to a Christian worldview. In spite of questions about the deity of Christ and the mriacles of the Bible, He was convinced that human rights are derived from God and expressed his concern lest the American populace ever forget this truth. He said,

"God who gave us life, gave us liberty. And can the liberties of a nation be thought secure when we have removed their only firm basis, a conviction in the minds of the people that these liberties are a gift from God? That they are not to be violated but with His wrath? Indeed, I tremble for my country when I reflect that God is just and that His justice cannot sleep forever."

The Truth Makes Us Free

That Jefferson's "wall of separation" had nothing to do with the exclusion of Christianity from the public square is obvious by simply looking at certain traditions in our government that are still carried on today. Every president since George Washington, including Thomas Jefferson, has taken his oath of office with his hand placed on a Bible. Every new session of Congress is opened with prayer, a tradition that dates back to it origins. Our currency has the statement, "In God we trust." The Supreme Court Justices are overshadowed by the Ten Comandments and each session is opened with a prayer for God to "save the court." There are other examples to numerous too cite here.

A recent ten-year project to discover where the founders got their ideas for America’s founding documents, found that by far the single most cited authority in their writings was the Bible. As Patrick Henry declared, “It cannot be emphasized too strongly or too often that this great nation was founded, not by religionists, but by Christians; not on religions, but on the gospel of Jesus Christ.”

In 1892 the U.S. Supreme Court completed a 10-year investigation in which thousands of historical documents were investigated concerning the historical roots of the nation. After citing more than sixty historical precedents, the Court concluded, "There is no dissonance in these declarations. There is a universal language pervading them all, having one meaning; they affirm and reaffirm that this is a religious nation . . . this is a Christian nation."

THE TRUTH is that the contemporary interpretation and application of the "wall of separation" is something new and novel and unknown before the 20th century. It is time for every person who is concerned about the erosion of freedom in this nation to stand up and prayerfully challenge this distorted interpretation of the First Amendment. And pray for another Great Awakening that will change the course of this nation.

This article is derived from Eddie Hyatt's soon-to-be-published book, GOD SHED HIS GRACE ON THEE: How a Spiritual Awakening Transformed Colonial America and Led to the Formation of the United States of America. Available on Amazon and at www.eddiehyatt.com/bookstore.html