WHAT DR. KING KNEW ABOUT THE U.S. CONSTITUTION THAT MOST AMERICANS DON'T

"I have a dream. It is a dream deeply rooted in the American dream."
Dr. Martin Luther King, Jr. 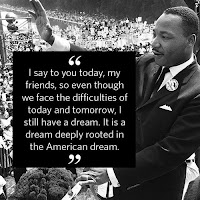 Secularists love to insist that America was founded on racist principles. They are wrong. David Azerrad was correct when he said, “The argument that the Constitution is racist suffers from one fatal flaw: the concept of race does not exist in the Constitution” (Hyatt, Pilgrims and Patriots, 161-62). Dr. King obviously understood this.
America's Founders were flawed individuals, born into a world of sin where slavery was already in existence. Nonetheless, with God's help, they did a marvelous job of formulating documents that brought into existence a powerful and prosperous nation, as Abraham Lincoln said, "conceived in liberty and dedicated to the proposition that all men are created equal."
No one was more aware of America's flaws and her strengths than Dr. King. Despite the flaws, he loved America, admired her founding documents and wanted her to succeed. He made this clear when, after being maligned, attacked and jailed, he stood on the steps of the Lincoln Memorial and declared,
“I still have a dream. It is a dream deeply rooted in the American dream."


This article was derived from Pilgrims and Patriots by Dr. Eddie Hyatt, a book that documents America’s overt Christian origins. Dr. Hyatt also conducts “America Reawakening” events in which he shows how America was birthed out of a Great Spiritual Awakening, and explains what must be done for another reawakening in the land.
Posted by Eddie Hyatt at 7:15 AM No comments: