5 REASONS I HAVE CHANGED MY POSITION ON DONALD TRUMP

Dr. Eddie L. Hyatt is on a mission to reconnect America with her severed Christian roots and help ignite another national, spiritual awakening across the land. His books on the topic can be found on Amazon and on his website at www.eddiehyatt.com. 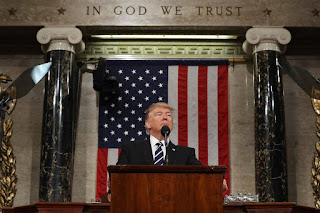 Posted by Eddie Hyatt at 5:51 PM No comments:

Many liberals, particularly on the Democratic side of the aisle, are wringing their hands over the fact that some of the top picks to replace Anthony Kennedy on the Supreme Court are devout people of faith.

One of these picks, Amy Barrett, was grilled about her faith when she was chosen to sit on the seventh U.S. Circuit Court of Appeals. Senator Diane Feinstein expressed dismay over the fact that when she reads Barrett’s speeches, “The conclusion one draws is that the dogma lives loudly in you.”
The insinuation of Feinstein and her Democrat colleagues was that Barrett's strong faith disqualified her from serving as a federal judge. Their anti-faith attack revealed a tragic departure from America’s founding generation where faith was protected and considered an asset to good government.
The Faith of the First Chief Justice
If Feinstein was concerned about Barrett, she would be doubly concerned with John Jay the first Chief Justice of the Supreme Court. Jay (1745-1829) was one of the authors of The Federalist Papers and served as President of the Continental Congress from 1778-79. In 1789 George Washington appointed him as the first Chief Justice of the United States Supreme Court, a post he held until 1795 when he resigned to serve as Governor of New York.
Jay was a devout Christian whose faith “lived loudly” in him, enough to disqualify him in the eyes of our modern, liberal senators. After all, he once publicly declared,
Unto Him who is the author and giver of all good, I render sincere and humble thanks for His manifold and unmerited blessings, and especially for our redemption and salvation by His beloved Son. Blessed be His holy name.
The Faith of the Second Chief Justice
John Marshall (1755-1835) who succeeded John Jay as Chief Justice of the Supreme Court, would also be rejected by Feinstein and her cohorts. Nonetheless, many consider him to be the greatest Chief Justice the Court has known, even though, like Jay, his faith “lived loudly” in him.
In one of his writings, Marshall clearly states what every Founding Father assumed: The founding documents and institutions on which the nation was formed presuppose a faith commitment to Christian principles and values. He wrote,
No person, I believe, questions the importance of religion in the happiness of man even during his existence in this world. The American population is entirely Christian, and with us Christianity and religion are identified. It would be strange, indeed, if with such a people, our institutions did not presuppose Christianity, and did not refer to it, and exhibit relations with it.
That Marshall saw no problem with expressions of faith in government is demonstrated by the fact that he ordered the Supreme Court facilities be made available to a congregation for their Sunday gatherings. So, each Sunday, the singing of Christian hymns and the preaching of God’s Word could be heard ringing through the chambers of both the House of Representatives and the Supreme Court.
What Marshall considered “strange” has become the norm with the modern Democrat party. How far removed from the founding generation are Senator Diane Feinstein and those who share her ideology!
Faith in God Necessary for a Stable Court and Society
The Founders considered faith in God a great asset because it meant the person acknowledged a transcendent moral guide that is predictable, reasonable, fair and applicable across the board. An atheist or agnostic, on the other hand, is left to his own finite, subjective opinions, subject to the sway of whatever might be faddish or culturally popular at a given time. James Madison expressed the view of the founding generation when he said, “Before any man can be considered as a member of civil society, he must be considered as a subject of the Governor of the Universe.”
Indeed, although there was tolerance for those of various faiths, there was a hostility toward atheism in early America. This was born out when a judge in the court of Chester County in the state of New York, threw out the testimony of a witness when the witness admitted he did not believe in the existence of God.
The judge said that by denying the existence of God, the witness had “destroyed all the confidence of the court in what he was about to say.” He went on to say that it was the first time he had met someone who did not acknowledge the existence of God, and that he knew of no case in a Christian country where a witness had been permitted to testify without such belief.
This event was recorded by the French sociologist, Alexis de Tocqueville, and occurred during his visit to America in 1831. Tocqueville said the incident was merely noted in the newspaper without further comment.
The Founders Would be Appalled at Feinstein and Her Colleagues
Yes, belief in the all-knowing, all-powerful God of the Bible—the Moral Governor of the Universe--was considered an important asset for judicial appointees and all public officials by the founding generation. Washington, Jefferson, Franklin and Madison would all be astonished and appalled at the modern hostility towards people of faith that is so rampant in our nation today.

Dr. Eddie L. Hyatt is on a mission to reconnect America with her severed Christian roots and help ignite another national, spiritual awakening that will sweep across the land. His books on the topic can be found on Amazon and on his website at www.eddiehyatt.com.

Posted by Eddie Hyatt at 6:44 PM No comments: