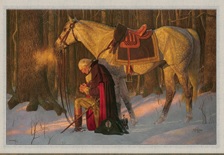 Donald Trump's theme is "Make America Great Again." By using the word "again" he acknowledges that America achieved a past greatness that has since been lost. In this article, on George Washington's birthday, I seek to point out that the same fundamental principles that made America great in the first place, are the same fundamental principles necessary to make her great again.


This article is derived from Dr. Eddie Hyatt’s book, Pilgrims and Patriots, available from Amazon and from his website at www.eddiehyatt.com
Posted by Eddie Hyatt at 8:19 AM No comments:

This article is derived from Dr. Eddie Hyatt’s book, Pilgrims and Patriots, in which he documents the radical Christian roots of American democracy and freedom. This book, and others, are available from Amazon and his website at www.eddiehyatt.com.
Posted by Eddie Hyatt at 6:19 AM No comments: