WHY AMERICA'S COVENANT WITH GOD MUST BE RENEWED IN 2018

Was America founded on a covenant with God? There is no question that the earliest immigrants to America, especially in New England, built their communities on the belief that they, as a people, had a sacred covenant with God. They believed that if they kept their part of the covenant, they would be blessed; but if they broke the covenant they would not be blessed and probably suffer irreparable harm.
This was clearly expressed by John Winthrop who, in 1630, led a flotilla of eleven ships with 700 passengers to New England where they founded the city of Boston and the Massachusetts Bay Colony. Winthrop wrote,
We have entered into an explicit Covenant with God. We have drawn up indentures with the Almighty, wherefore if we succeed and do not let ourselves be diverted into making money, He will reward us. Whereas if we fail, if we fall to embrace this present world and prosecute our carnal intentions, the Lord will surely break out in wrath and make us know the price of the breach of such a Covenant.
The Truth About the Mayflower Compact 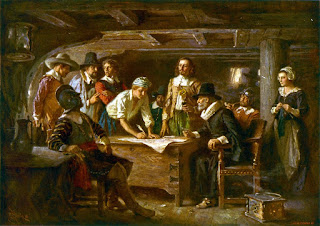