WHY GEORGE WASHINGTON UNIVERSITY SHOULD CELEBRATE ITS NAMESAKE 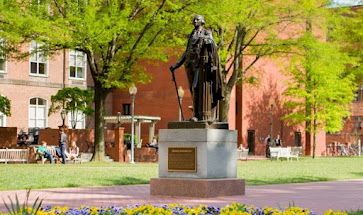 The Washington Post recently raised eyebrows after publishing an op-ed that called for renaming George Washington University in order to address systemic racism and inequality. Such rhetoric, however, reveals a very limited understanding of history and is at odds with the nation's most highly regarded abolitionists and Civil Rights leaders.

For example, no one was more scathing in their verbal attacks on slavery and racial inequality than the former slave and abolitionist, Frederick Douglass. Yet, after much study and investigation, Douglass acquired a very high regard for Washington and America’s founders. In a July 4, 1852 speech, Douglass declared,

Fellow Citizens, I am not wanting in respect for the fathers of this republic. The signers of the Declaration of Independence were brave men. They were great men too—great enough to give fame to a great age. It does not often happen to a nation to raise, at one time, such a number of truly great men.

The difference in Douglass and modern anti-American pundits is that he understood the historical context of what happened in 1776 and 1787 and, therefore, their significance. He realized that, although imperfect, the Founders struck a clear and bold blow for liberty by formulating anti-slavery founding documents at a time when slavery was accepted and practiced throughout most of the world.

Indeed, America's founders turned against slavery as the result of a great, spiritual awakening that transformed 18th century colonial America. This “Great Awakening” breached racial barriers and ignited an anti-slavery movement that turned multitudes of the founding generation against slavery, and even those founders who owned slaves publicly confessed that it was sinful and wrong. These facts led the noted Black scholar, Dr. Thomas Sowell, to write,

Among those who turned against slavery in the 18th century were George Washington, Thomas Jefferson, Patrick Henry, and other American leaders. You could research all of 18th century Africa or Asia or the Middle East without finding any comparable rejection of slavery there (Hyatt, 1726: The Year that Defined America, 90).

Yes, Sowell is correct in saying that George Washington turned against slavery. In a letter to Robert Morris, dated April 12, 1786, Washington wrote, “There is not a man living who wishes more sincerely than I do, to see a plan adopted for the abolition of slavery.”

Before his death, Washington devised a plan to completely rid Mt. Vernon of slavery. Those slaves who chose to leave were free to do so and those who chose to stay were paid wages. He also began a program to educate the children of slaves and prepare them for liberty. In a conversation with John Bernard concerning abolition, Washington declared,

Not only do I pray for it, on the score of human dignity, but I can clearly foresee that nothing but the rooting out of slavery can perpetuate the existence of our union by consolidating it in a common bond of principle (Hyatt, Abolitionist Founding Fathers, 42).

Dr. Martin Luther King, Jr. (1929–1968) also understood the anti-slavery, inclusive character of America’s founding documents. In his stirring, I Have a Dream speech, he exhorted America, not to dispense with those documents, but instead, to live up to them. Speaking from the steps of the Lincoln Memorial, he declared,

When the architects of our Republic wrote the magnificent words of the Constitution and the Declaration of Independence, they were signing a promissory note to which every American was to fall heir. This note was a promise that all men, yes, black men as well as white men, would be guaranteed the "unalienable Rights" of "Life, Liberty and the pursuit of Happiness.

Yes, George Washington and other American Founders were on the cutting edge of the fight to end slavery at a time it was accepted and practiced in Africa, Asia, the Middle East and most of the world. We should, therefore, join Douglass and King in honoring Washington and the other founders for creating the freest nation in the history of mankind.

The article was derived from the books Abolitionist FoundingFathers and 1726: the Year that Defined America by Eddie Hyatt 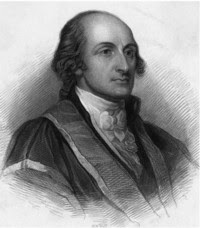 The anti-abortionist who are enraged at certain prolife justices on the Supreme Court, would have completely lost it if they had encountered America's first Chief Justice of the Supreme Court, John Jay.  Appointed by George Washington, Jay was a devout Christian who, unlike so many modern public figures, did not talk about “my faith,” but boldly proclaimed the object of his faith, saying,

Unto Him who is the author and giver of all good, I render sincere and humble thanks for His manifold and unmerited blessings, and especially for our redemption and salvation by His beloved Son, blessed be His holy name.

Jay was a passionate advocate for Life and Freedom. Over 60 years before the Emancipation Proclamation, as governor of New York, he pushed through a law outlawing slavery in that state. But although he worked diligently to pass laws against slavery, Jay believed that Christianity, lived out in word and deed, was the ultimate key for eliminating that horrible institution.

That is why in 1785 he helped found the “New York Society for Promoting the Manumission of Slaves.” Manumission emphasized that slaveholders should take initiative and free their slaves even if there was not yet a law against it. They should do this simply because it was the right thing, and Christian thing, to do. In an address to the New York Constitutional Convention in December of 1776, Jay declared,

The Gospel is yet to be preached to those western Regions, and we have the highest Reason to believe that the Almighty will not suffer Slavery and the Gospel to go Hand in Hand. It cannot, it will not be (Hyatt, America's Revival Heritage, 92).

Like most of the founding generation, Jay believed that only Christianity provided the moral values for a stable and successful nation, and he encouraged the American populace to keep this in mind when they went into the voting booth. In 1816, he wrote,

Providence has given to our people the choice of their rulers, and it is the duty, as well as the privilege and interest of our Christian nation to select and prefer Christians for their rulers. National prosperity can neither be obtained nor preserved without the favor of Providence (Hyatt, America's Revival Heritage, 92).

Justice John Jay was right. We must go to the polls this year and vote for real Christians who believe in Life and Freedom. And while we oppose Roe vs Wade, we must also pray for another Great Awakening to roll across this land, touching hearts and changing minds. Then the pregnant mother will give birth to her child, and abortion clinics will close their doors, simply because it is the right thing, and Christian thing, to do.

This article is derived from Dr. Eddie Hyatt's book, America's Revival Heritage, available from Amazon and his website at www.eddiehyatt.com.