IS AMERICA REAPING THE WHIRLDWIND? 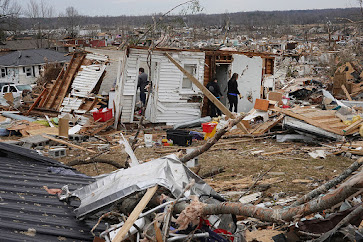 My heart goes out to the parents and grandparents who have lost children in the Uvalde, TX massacre. I pray for God's Peace and Presence for them in their time of excruciating grief. In seeking answers, it is time that we recognize the moral and spiritual condition of the nation that is making room for such horrible incidents. That is what I seek to do in this article that is based on Hosea 8:7, They sow the wind and reap the whirlwind.

Hosea’s words describe what is happening in America today. We had hardly gotten past the horrific murders in Buffalo, NY before 19 elementary school children and 2 teachers in the small town of Uvalde, Texas were gunned down by an 18-year-old whose motives are yet unknown. Such mass murders and school shootings have become all too common.

What is happening? For generations, American children attended school without incident and without even the thought that their lives might be in danger. When I attended high school in the 1960s the major problems were chewing gum, talking in class, being out of your seat without permission, or being late with an assignment.

Those were the days, however, before the anti-Christian purge that began in the 1960s. This purge has resulted in the secularization of America's public school system and the all-out attempt to remove every vestige of Christian influence, such as prayer, Bibles, and displays of the Ten Commandments and the Golden Rule.

A Scientific Study Confirmed What Many of Us Already Knew

We are experiencing the whirlwind, i.e., the destructive consequences of a generation telling God He is not wanted or needed. This was confirmed by a scientific study, led by a respected sociologist, on the power of religious symbols. They discovered that religious symbols exert a powerful moral force on a society.

This sociologist was interviewed by the liberal TV host, Charlie Rose. One thing that caught my attention was when he told how they discovered that a person sitting in a room with a Bible in view is less likely to tell a lie than if there is no Bible in the room. They found that the very presence of the Bible exuded a moral restraint.

His scientific study confirmed what many of us already knew. The forceful eviction of prayer, Bible reading, and displays of Scripture verses and the Ten Commandments has opened the door for all kinds of evil into the schools and culture of America. Where the light does not shine, darkness prevails; and without these religious and moral constraints, our culture has become rude, crude, and violent.

America’s Founders were unanimous in their belief that only Christianity provided the positive moral underpinnings for a stable and prosperous nation. John Adams expressed this view just two weeks before the adoption of the Declaration of Independence. In a letter to his cousin, Zabdiel Adams, a minister of the Gospel, Adams wrote,

Statesmen, my dear sir, may plan and speculate for Liberty, but it is Religion and Morality alone, which can establish the Principles, upon which Freedom can securely stand (Hyatt, 1726: The Year that Defined America, 164.

When the Founders use the word “religion,” they are referring to Christianity, and George Washington warned the new nation to cling to religion and morality. In his Farewell Address, after serving two terms as America’s first president, Washington declared, “Of all the dispositions and habits which lead to political prosperity, religion [Christianity] and morality are indispensable supports.”

Notice that Washington did not call religion optional. He referred to Christianity and morality as “indispensable” for social stability and political prosperity. Thomas Jefferson was in complete agreement with Washington, and he made Washington’s Farewell Address required reading at the University of Virginia, which he had founded.

The Founders knew that the success of the free Republic they had formed hinged on the good moral character of its citizens, and they all agreed that only Christianity provided the moral values that would preserve the nation. This is why John Adams, in a 1798 address to the officers of the Massachusetts Militia, declared,

We have no government armed with power capable of contending with human passions unbridled by morality and religion . . .  Our Constitution was made only for a moral and religious [Christian] people. It is wholly inadequate to the government of any other” (Hyatt, 1726: The Year that Defined America, 168).

Indeed, America’s Founders believed that faith in God was necessary for good citizenship. This was expressed by James Madison, the chief architect of the Constitution, when he wrote, “Before any man can be considered as a member of civil society, he must be considered as a subject of the Governor of the Universe.” Madison also wrote,

The belief in a God All Powerful wise and good, is so essential to the moral order of the world and to the happiness of man, that arguments which enforce it cannot be drawn from too many sources nor adapted with too much solicitude to the different characters and capacities impressed with it (Hyatt, 1726: The Year that Defined America, 111).

The Founders did not want an official state church like the nations of Europe, but they all agreed that only Christianity provided the moral and intellectual system for a stable society. This why the well-known Catholic scholar, William Novak, wrote,

Far from having a hostility toward religion, the founders counted on religion [Christianity] for the underlying philosophy of the republic, its supporting ethic, and its reliable source of rejuvenation (Hyatt, 1726: The Year that Defined America, 171).

One might legitimately question if America is too far gone? I do not believe she is. Christians, however, must awaken. We can no longer allow the anti-Christian voices to control the narrative. We must stand up and speak the truth in love. We must also pray for another national awakening to roll across the land like a might tsunami wave.

We can also draw hope from Hosea for in the same prophecy where he warned of the destructive consequences of them having sown the wind, he also offered instruction and hope. In Hosea 6:12 he exhorted them to sow a different kind of seed, saying,

Sow for yourselves in righteousness;

Reap in mercy, break up the fallow ground.

For it is time to seek the LORD,

Till He comes and rains righteousness on you.

Dr. Eddie Hyatt is the author of several books on America’s overt Christian origins out of spiritual awakening. These books include America’s Revival Heritage and 1726: The Year that Defined America, available from Amazon and his website at http://eddiehyatt.com.