A MESSGE FOR AMERICA FROM HER TWO GREATEST PRESIDENTS 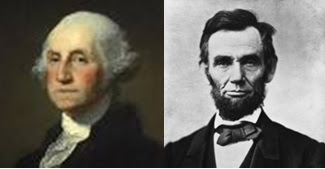 Another gun law at this time would be a political band aid on the moral and cultural rot that is eating away at the soul of America. What is needed is a national turning to God, acknowledging our sin of prideful self-reliance, thinking we could build a happy society apart from our Creator.

George Washington knew that a peaceful nation of happy people is impossible without God. That is why, after defeating the British and winning Independence, he immediately sent a letter to all the governors of the states that included the following pastoral exhortation. He wrote,

I now make it my earnest prayer that God would have you, and the State over which you preside, in his holy protection; that he would incline the hearts of the citizens . . .  to entertain a brotherly affection and love for one another . . . and to demean ourselves with that charity, humility, and pacific temper of mind, which were the characteristics of the Divine Author of our blessed religion, and without a humble imitation of His example in these things, we can never hope to be a happy nation (Hyatt, 1726: The Year that Defined America, 120).

That we may then unite in most humbly offering our prayers and supplications to the Great Lord and Ruler of Nations and beseech him to pardon our national sins and other transgressions, to enable us all, whether in public or private stations, to perform our several and relative duties properly and punctually, to render our national government a blessing to all people, by constantly being a government of wise, just and constitutional laws, discreetly and faithfully executed and obeyed (Hyatt, 1726:The Year that Defined America, 134).

God did bless America and the new nation quickly rose to prominence among the nations of the world. Ronald Reagan, however, was right when he said, “Freedom is never more than one generation away from extinction.” God has no grandchildren. Faith and Freedom must be fought for, and experienced, by each generation.

Succeeding generations of America became smug and prideful in their prosperity and did not use their power to free those who were enslaved in their midst. Judgement came and a horrible Civil War began that could very well have forever destroyed America.

Abraham Lincoln, however, recognized the root of the problem. In the midst of the War, he called the nation back to God by issuing a proclamation designating April 30, 1863, as a National Day of Humiliation, Fasting, and Prayer. In this proclamation he rebuked the nation for its smugness and self-sufficient pride, saying,

It is the duty of nations as well as of men to own their dependence upon the overruling power of God, to confess their sins and transgressions in humble sorrow yet with assured hope that genuine repentance will lead to mercy and pardon, and to recognize the sublime truth, announced in the Holy Scriptures and proven by all history: that those nations only are blessed whose God is Lord:

But we have forgotten God. We have forgotten the gracious Hand which preserved us in peace and multiplied and enriched and strengthened us; and we have vainly imagined, in the deceitfulness of our hearts, that all these blessings were produced by some superior wisdom and virtue of our own.

Intoxicated with unbroken success, we have become too self-sufficient to feel the necessity of redeeming and preserving grace, too proud to pray to the God that made us! (Hyatt, 1726:The Year that Defined America, 185).

Does that not describe America today? Does that not describe the entertainment industry, the educational system, and Washington D.C? Remember, in 2019, the Democrat National Committee (DNC), the governing body of the party now in power, unanimously passed a resolution affirming atheism and declaring that neither Christianity nor any religion is necessary for morality and patriotism. How different from Washington and Lincoln!

In his proclamation, Lincoln went on to say,

It behooves us then to humble ourselves before the offended Power, to confess our national sins and to pray for clemency and forgiveness . . . and I do, by this proclamation, designate and set apart Thursday, the 30th day of April 1863, as a day of national humiliation, fasting and prayer.

And I do hereby request all the people to abstain on that day from their ordinary secular pursuits, and to unite, at their several places of public worship and their respective homes, in keeping the day holy to the Lord and devoted to the humble discharge of the religious duties proper to that solemn occasion.

All this being done, in sincerity and truth, let us then rest humbly in the hope authorized by the Divine teachings, that the united cry of the nation will be heard on high and answered with blessing no less than the pardon of our national sins and the restoration of our now divided and suffering country to its former happy condition of unity and peace.

In witness whereof, I have hereunto set my hand and caused the seal of the United States to be affixed. By the President: Abraham Lincoln.

It is an historical fact that immediately after this day of prayer and repentance, the war shifted in favor of the Union and was soon brought to an end by the Battle of Gettysburg. National repentance and prayer changed the course of history.

It is not too late for America! There is still hope. I pray we see a turning to God on a scale unknown since this proclamation of Lincoln. However, since we do not have a Washington or a Lincoln in the White House, we cannot not wait for it to begin there.

Let it begin with each individual, each home, and each congregation.  II Chronicles 7:14 is still valid, which says,

If My people, who are called by My Name,

Will humble themselves and pray,
And seek My face, and turn from their wicked ways,

Then will I hear from heaven and will forgive their sin and heal their land.

Dr. Eddie Hyatt is an author, historian, and ordained minister with a passion to see genuine spiritual awakening in America and around the world. He has written numerous books on revival and other Biblical issues. This article was derived from his book, 1726: The Year that Defined America, available from Amazon and his website at http://eddiehyatt.com.