THE CHRISTIAN ORIGINS OF OUR AMERICAN THANKSGIVING HOLIDAY

America’s national “Thanksgiving” holiday is rooted in the nation’s Christian origins and the habit of its first immigrants to set aside special days for giving thanks to God for His goodness and blessings. This custom can be traced back to the Pilgrims who landed at Cape Cod in November of 1620, who periodically would set aside days in which to offer gratitude to God for His mercy and blessings. This custom was carried on by succeeding generations and found its way into the national consciousness and calendar.
The First Thanksgiving

The Pilgrims who landed on Cape Cod in November of 1620 were devout followers of Christ who had left the comforts of home, family and friends to pursue their vision of a renewed and reformed Christianity. They were not whiners but chose to maintain an attitude of gratitude even through the most trying times, such as the winter of 1620-21 when sickness ravaged their community and half of them--about fifty—were taken away in death.
The first Thanksgiving was celebrated by the Pilgrims after they gathered in their harvest in the fall of 1621, about one year after their landing at Cape Cod. Although their hearts were still heavy from the losses suffered the previous winter, there were at least three areas for which they felt particularly grateful to God.
1) With the arrival of spring the sickness that had immobilized the community and taken many of them in death had lifted. Their health returned, and although sad from their losses, they were able to apply themselves to carving out a home in the New England wilderness.
2) With the arrival of spring God providentially sent to them an English speaking Native American, Squanto, who became their interpreter and guide, helping them establish friendly relations with Massosoit, chief of the Wampanoag, the nearest and most powerful tribe in the region. In March of 1621 they had signed an agreement of peace and mutual aid with Massosoit, which resulted in both peoples moving freely back and forth in friendship and trade.
3) Through hard work and Squanto’s advice about farming and fishing (they were mostly townspeople and craftsmen) they experienced abundant harvests during the summer and fall of 1621.
Even though they still felt the loss of so many friends and family members, they could see God’s hand of mercy sustaining them in the preceding months. So after gathering in their fall harvest, which was abundant, Governor William Bradford designated a Day of Thanksgiving during which they would pause to offer up thanks to God for his mercy and blessings. They were not whiners. They knew what it meant to “count their blessings.”
Englishmen & Native Americans Celebrate Together

The first Thanksgiving was attended by an approximate equal number of English Pilgrims and Native Americans. After Governor Bradford announced the Day of Thanksgiving, word of the event soon spread to their Native American friends. So when the day arrived, not only were there individual natives on hand, but Massosoit arrived with ninety of his people, and five dressed deer to add to the meals the Pilgrims had prepared.
The Pilgrims did not seek to force their faith on the Indians but neither did they hide their faith. After all, in the Mayflower Compact they had stated that they had come to the New World "for the glory of God and the advancement of the Christian faith." One can only imagine the emotions that filled their hearts as, in the presence of their new Native American friends, they joined Elder William Brewster in lifting up their hearts in praise and thanksgiving to God.
The day turned out to be more than they could have imagined. Not only did they enjoy meals together with thankful hearts, but they engaged in shooting matches, foot races and wrestling matches. It was such an enjoyable time that the one Day of Thanksgiving was extended for three full days.
And yes, it is almost certain that there was turkey at the first Thanksgiving for Governor Bradford had sent out four men to hunt for “fowl” who returned with enough “fowl” to last them an entire week.
Thanksgiving for a Remarkable Answer to Prayer 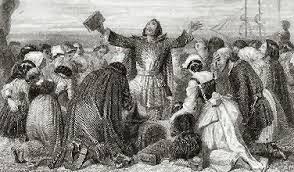 
In spite of the fact that "Thanksgiving" has become secularized and commercialized, we as Christians must never forget that the day is rooted in the commitment of our forefathers and foremothers to maintain a thankful heart even through the most painful and challenging times. So this Thanksgiving let's count our blessings, "name them one by one and it will surprise you what the Lord has done."

Dr. Eddie L. Hyatt is an author, ordained minister and founding director of "The Revive America Project," dedicated to seeing another great, national Spiritual awakening in our land. In his book, America's Revival Heritage, he has documented this nation's radical Christian origins, available from Amazon and his website at http://www.eddiehyatt.com/bookstore.html.
Posted by Eddie Hyatt at 3:01 PM No comments:


It is time for another Great Awakening in our land and we must not flinch from showing both the gravity of sin and its effect on the human race, and God’s amazing grace that has been made available through Jesus Christ.

Eddie L. Hyatt is an author, historian and biblical scholar. He is also the founder and director of the "Revive America" Project, dedicated to seeing another Great Awakening in America. His books on "revival" and "spiritual awakening" are available from Amazon and and from his website at www.eddiehyatt.com/bookstore.html
Posted by Eddie Hyatt at 7:51 PM No comments:

Renewing the Vision – Reclaiming the Hope
Dear Friends,
The first "Revive America" event in Schenectady, NY was a great blessing and I came away with a deep and holy sense of Divine destiny in my heart; with the deep sense that this message needs to be heard across the nation. I thought it was interesting, and perhaps providential, that the first "Revive America" event was held in the area that George Barna has identified as the most "post-Christian" area in America--the "Capital District of Schenectady/Albany, New York. 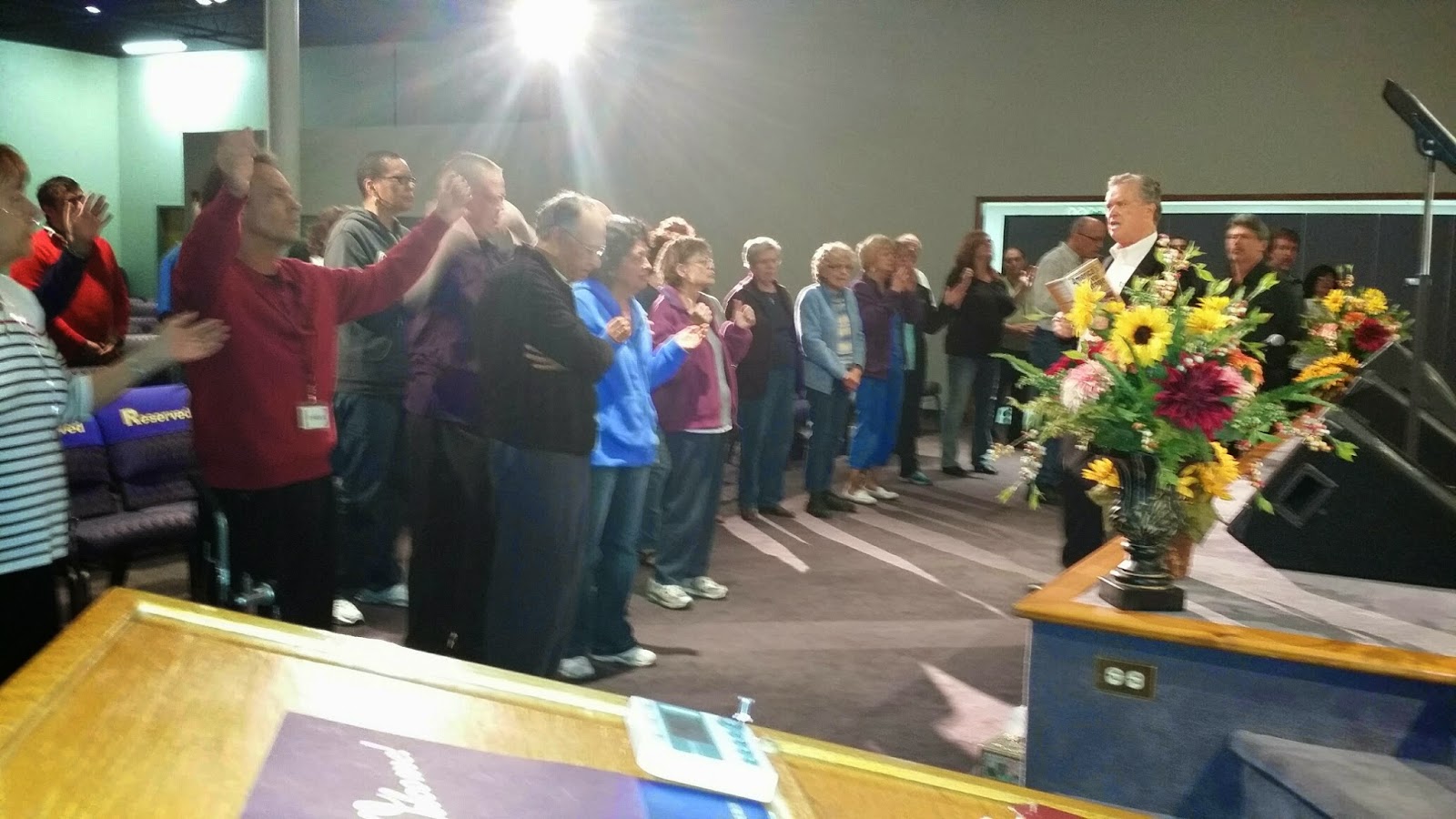 FOR THE GLORY OF GOD AND THE ADVANCEMENT OF THE CHRISTIAN FAITH
On Saturday evening as I was speaking about the significance of the early written documents by the early Pilgrims, I showed the Mayflower Compact on the big screen. I had a definite sense that I was to lead the people in repeating the two stated reasons they had come to this land--"for the glory of God and the advancement of the Christian faith."
At the end of the service a young man talked to me who was so excited at what he had heard. He said, "I am attending a community college and taking a course on American History. The professor told us that the Pilgrims did not really come for religious reasons but for economic reasons. But it is there in their own words." He was overjoyed and said, "I am going to Regent University to study Bible and History and I want to teach this like you." 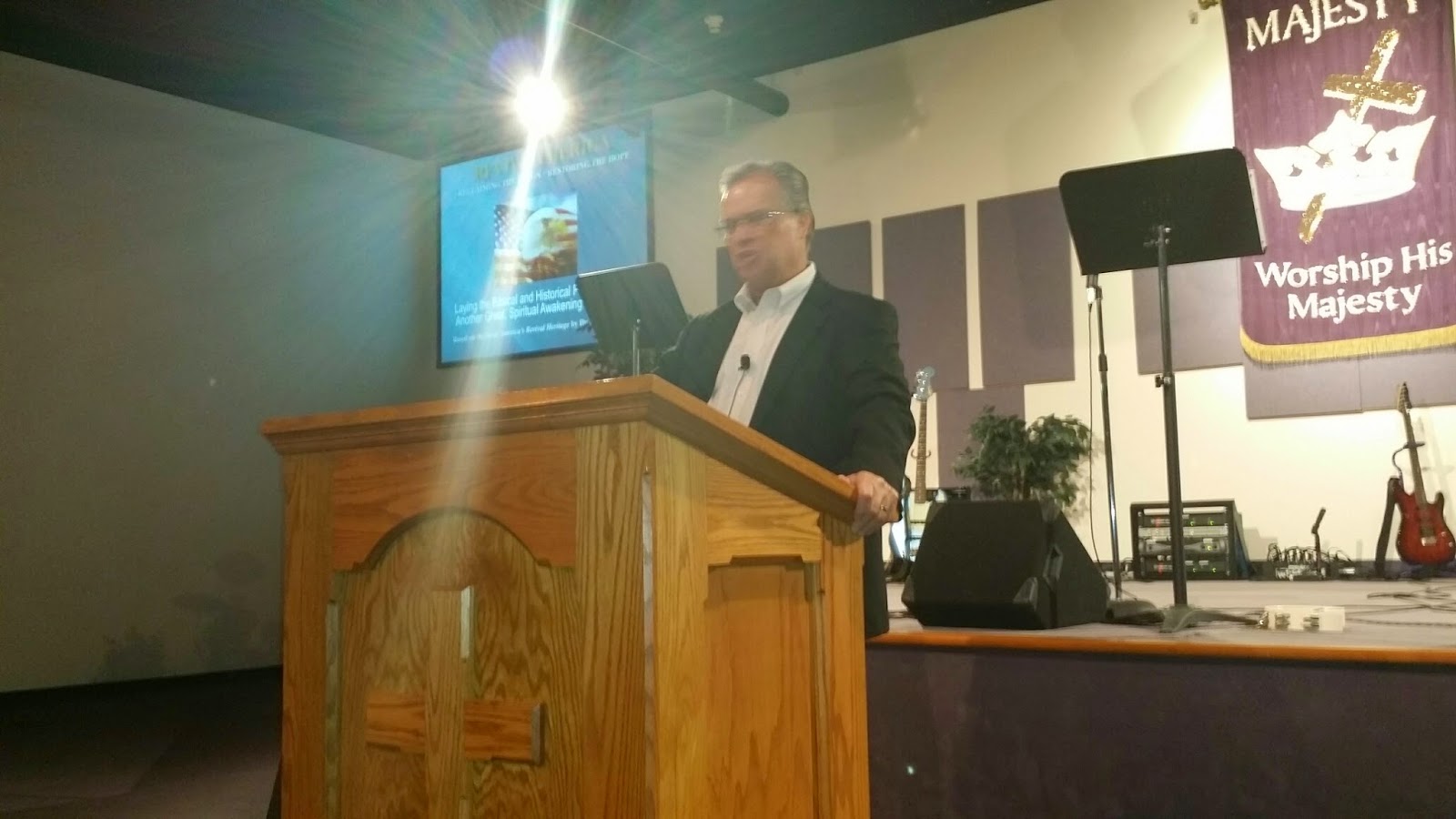 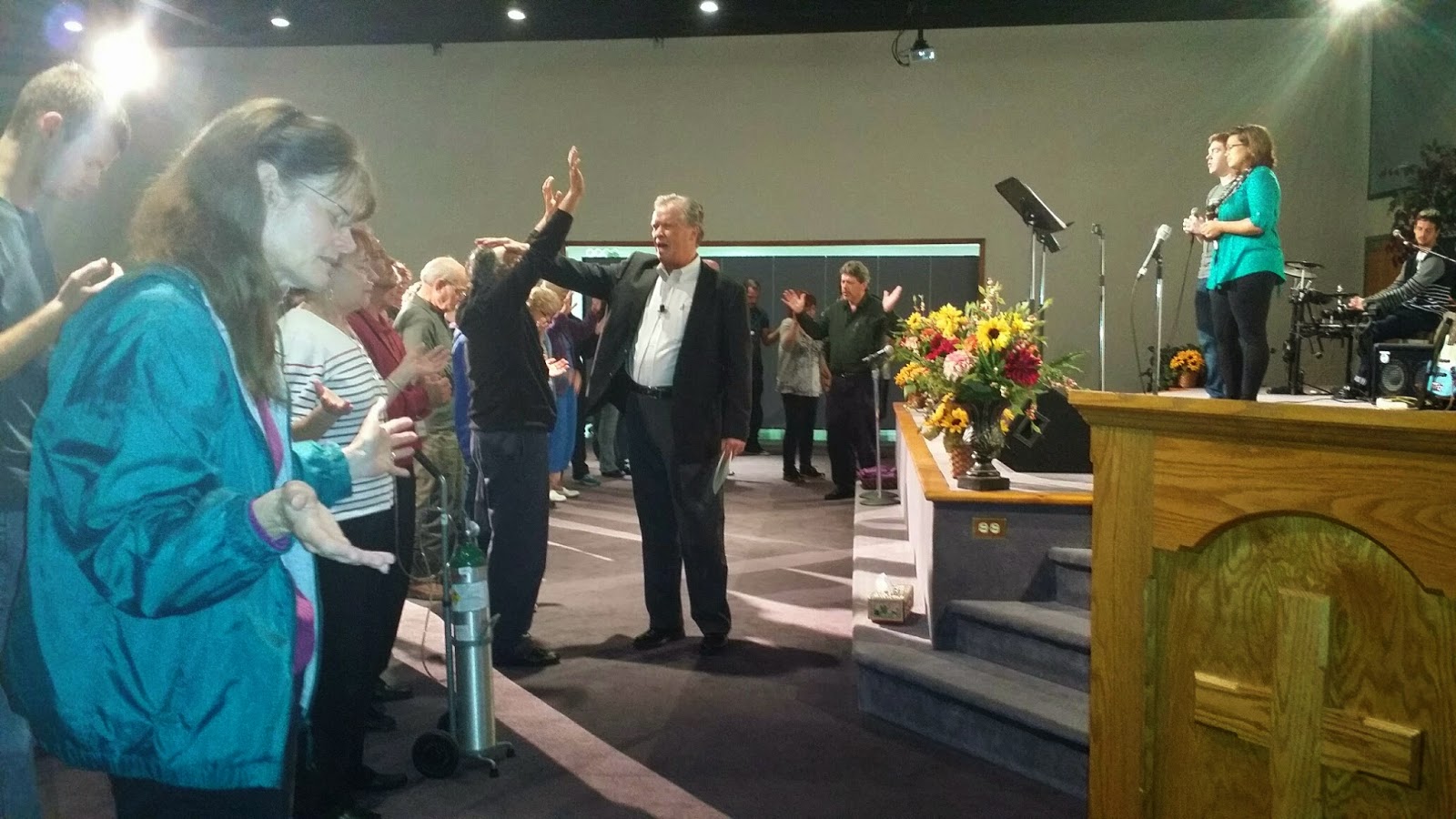 FORMER STUDENTS ATTEND THIS EVENT
I was pleasantly surprised to see former students in the meetings. Paul & Naomi Novik and their three children drove about two hours from their home near New York City. Paul and Naomi worked closely with Sue and me when we all lived in Tulsa. Paul was a a student of mine at CFNI years ago. He met Naomi, a native of New Orleans, when her family fled Hurricane Katrina and came to the DFW area (God brings good out of bad things). Giancarlo (John) De Luca was a student of mine at WIBI in Toronto and he rode his motorcycle about 400 miles to be in the meetings, and was a great blessing. 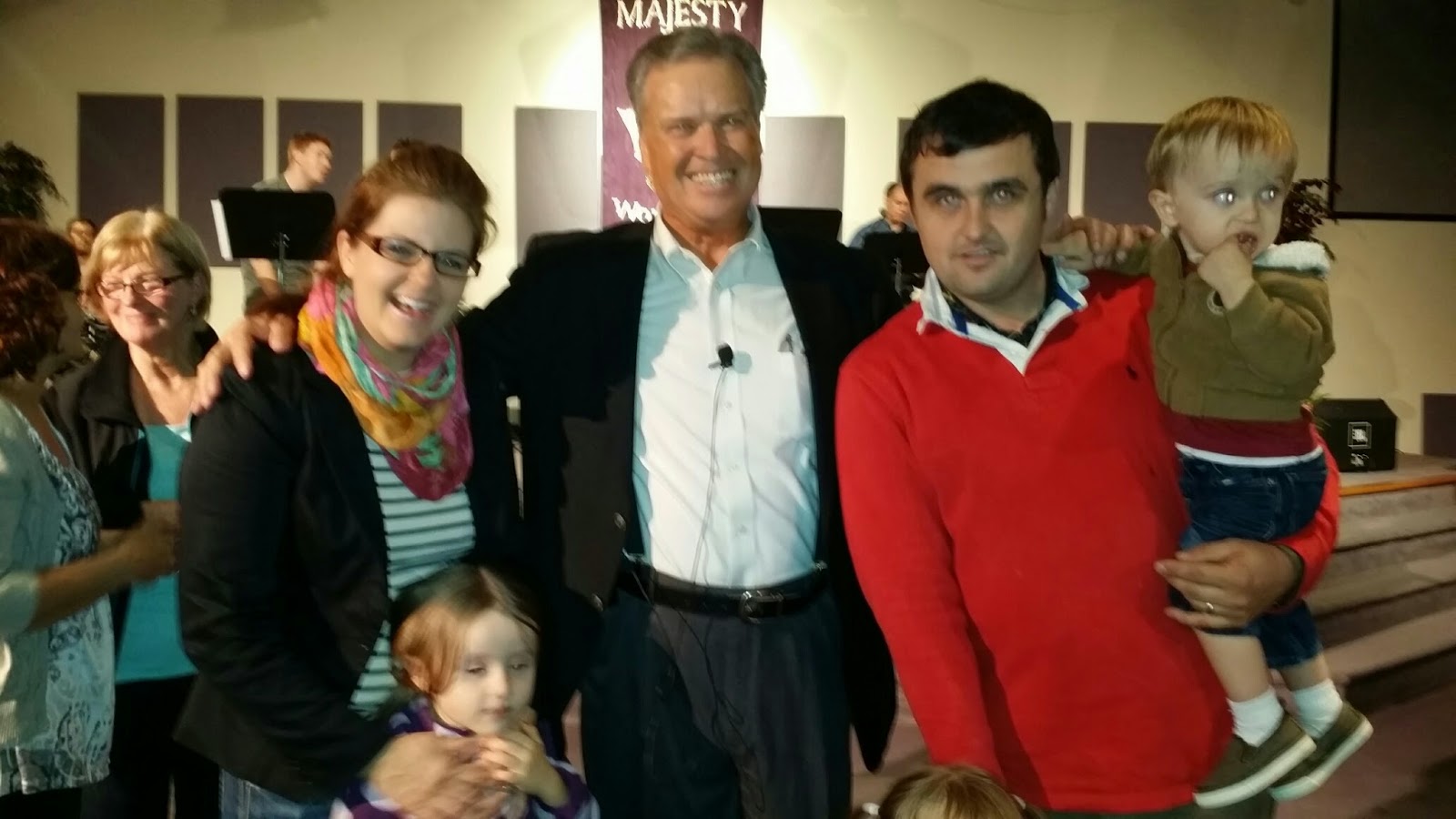 BOOK SALES HAVE JUMPED
It is interesting, and I think Providential, that sales of America's Revival Heritage have taken off since this event. If you do not have a copy of the book, it is available from Amazon and from my website at www.eddiehyatt.com/bookstore.html.

WHAT CAN YOU DO?
You can join me and others in praying for another Great Awakening in our land and around the world. You can consider becoming a prayer partner and pray with me for wisdom and God's Providential guidance in getting this message out to the nation and the world. You can consider becoming a monthly financial partner and help underwrite the expenses of this ministry. God is our Source and we look to Him, but He uses human channels to fulfill His plans and purposes.
I am your friend and partner for another Great Awakening; in your life, in America and around the world!

Posted by Eddie Hyatt at 2:34 PM No comments: