WHY WE MUST RECOVER AMERICA'S CHRISTIAN HERITAGE

"People without a heritage are easily persuaded." - Karl Marx


If America is to recover its downhill slide into an abyss of socialism, anti-Christian secularism, amorality and economic collapse, we as Christians must rise up and recover our country's true national heritage. The identity of a people or nation is tied to their history--to their origins--and we have been robbed of ours. This, in turn, has opened the door for a flood of ungodly influences into our society.

It is obvious that we have been robbed of our identity as a nation birthed out of a great Spiritual awakening and founded on Judeo-Christian values and principles. This was never more obvious than when our president stood before a foreign audience and declared, "America is not a Christian nation," with hardly a peep of protest from back home.


Dr. Eddie Hyatt is an author, historian, revivalist and Bible teacher. This article is derived from his book, America's Revival Heritage, available from Amazon and his website at http://www.eddiehyatt.com/bookstore.html.

THE PROPHETHOOD OF ALL BELIEVERS

IF MY PEOPLE: GOD'S PROMISE TO SAVE AMERICA

Two hundred and thirty-eight years ago America was birthed out of a great Spiritual awakening that shaped the thinking and attitudes of the Founders. This is what the late Harvard professor, Perry Miller, was referring to when he said, “The Declaration of Independence of 1776 was a direct result of the preaching of the evangelists of the Great Awakening.”
This is what Patrick Henry, the Founding Father known for his “give me liberty or give me death” speech, was referring to when he said, “It cannot be emphasized too strongly or too often that this great nation was founded, not by religionists, but by Christians; not on religions, but on the gospel of Jesus Christ.
America's Christian Origins Unchallenged

This nation’s Christian origins were unquestioned for the first one-hundred years of her existence. This is why the noted U.S. senator, Daniel Webster, speaking in 1820 at the 200-year anniversary celebration of the landing of the Pilgrims at Plymouth, Massachusetts, would say;
Finally, let us not forget the religious character of our origin. Our fathers were brought hither by their high veneration for the Christian religion. They journeyed by its light, and labored in its hope. They sought to incorporate its principles with the elements of their society, and to diffuse its influence through all their institutions, civil, political, or literary.
This nation’s Christian character was still in obvious evidence in 1831 when Alexis de Tocqueville, the French sociologist, came to America to study its institutions and to discover how it had grown and flourished in such a short period of time. At the time of his visit, America was still enjoying the fruit of the First and Second Great Awakenings and Tocqueville wrote, "The religious atmosphere of the country was the first thing that struck me on arrival in the United States."
At this early period, Tocqueville saw no “separation of church and state” (an expression not found in the Constitution) in America. Instead, he said he observed that the means of improving the government were the same means employed in conversion and the advancement of the Christian faith. He concluded that, in America, “From the beginning, politics and religion contracted an alliance which has never been dissolved.”
The Attempt to Rewrite America's Past

America today is very different from the America Tocqueville saw in 1831. The American church has been asleep at the helm. While we have been preoccupied using our faith to pursue our own personal success and American dream, the secularist progressives have been quietly rewriting our history and changing our nation.
Secularist progressives not only want to remove Christianity from the modern classroom, courtroom and every public venue, they also want to expunge it from our past. They know that if they can rewrite our history they can destroy our identity as a nation; for a people derive their sense of identity from their past.
This is what Karl Marx was referring to when he said, “People without a heritage are easily persuaded.” This is why I wrote the book, America’s Revival Heritage; so that Christian America would not be so easily persuaded to believe the lie of the progressive secularist historian. This is why in the near future I will be presenting “Revive America” events for the purpose of recovering our history and calling God’s people to prayer and repentance.
There is Hope

America is at a very critical moment in her history. No politician or political party can save us. Another election will not change things. The corruption and deception run too deep on both sides of the aisle. Only another Great Awakening from heaven will make the difference. Another Great Awakening “can” happen but it must begin with Christians recovering the truth about our past.
About four years ago I was surprised by the Holy Spirit who suddenly began flooding my mind with thoughts of faith and hope that America “could” see another Great Awakening. This continued during a two hour drive to a preaching engagement and continued into the night in my hotel room. I did not receive a guarantee that it “would” happen, but an assurance that it “could” happen.
I was reminded that the great promise of a national healing in II Chronicles 7:14 is conditional and begins with If My people . . .. America’s future does not lie with the Congress or Supreme Court or the Presidency. America’s future is in the hands of God’s people. What will we do?
Will we step up to the plate in this hour and meet the conditions for God to change America? Will we as Christian leaders repent for building our own personal kingdoms rather than seeking His? Will we repent of our prideful competitiveness with one another? Will we repent for seeking revival selfishly for our own advancement rather than for the advancement of the kingdom of God?
America’s future is in our hands.
If My people . . ..

Dr. Eddie Hyatt is an author, historian, revivalist and ordained minister. This article was derived from his book, America's Revival Heritage, available from Amazon and his website at http://www.eddiehyatt.com/bookstore.html. 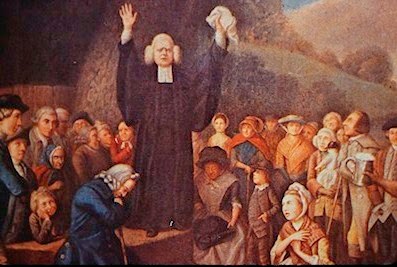 Posted by Eddie Hyatt at 6:08 AM No comments: