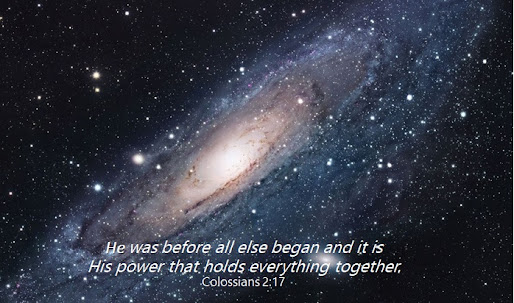 Along with being a devout follower of Jesus Christ and committed to proclaiming and teaching His word, I have a deep interest in science, particularly astronomy. I have, therefore, read with interest recent articles about the discoveries of the Hubble and James Webb space telescopes.
One area that has caught my attention is what astronomers are calling “Dark Matter.” Simply speaking, Dark Matter is an unseen force that is holding the universe together. It cannot be seen and astronomers don’t know what it is, but they say it is keeping the universe from flying apart.
For example, our solar system is being held together by the gravitational force of the sun. Since the gravitational force of an object depends on its size, this means that our sun is the perfect size to keep the planets in orbit. If the sun were smaller, the planets would all wander off aimlessly into space.
Now, our solar system, along with billions of stars and other celestial bodies, are all rotating around the center of our Milky Way galaxy. Then, our Milky Way galaxy is part of a cluster of galaxies that are all rotating around another center.
Here is the dilemma. According to astronomers and astrophysicists, there is not nearly enough matter (mass) in the universe to produce enough gravity to keep everything from flying apart. There is some force that they cannot see or explain that is holding everything together. So, they call it “Dark Matter.”
Now, the Bible gives a clear explanation for this dilemma, particularly in Paul’s letter to the believers in Colosse. This letter has been called “Paul’s full-length portrayal of Christ” for in it he sets forth Jesus Christ in all His Divine majesty, power, and creative glory.
In 2:15 Paul says that Jesus is the image of the invisible God and that by Him all things were created that are in heaven and on earth. Then, in vs. 17, he says, "HE WAS BEFORE ALL ELSE BEGAN AND IT IS HIS POWER THAT HOLDS EVERYTHING TOGETHER" (TLB). The writer of Hebrews concurs saying that Christ is "upholding all things by the word of His power" (NKJV).
If He can hold the universe together, He can hold your life together. He can hold your family together. He can hold your congregation together. He can hold this nation together. He must, however, be at the center. He must be Lord. Everything flies apart when He is not at the center. Make Him Lord of your life today, and watch Him hold everything together.
Dr. Eddie Hyatt is an ordained minister and author who has a passion to make Christ known throughout the earth. His books on Divine Awakenings and other Biblical themes are available from Amazon and his website at http://eddiehyatt.com.
Posted by Eddie Hyatt at 9:26 AM