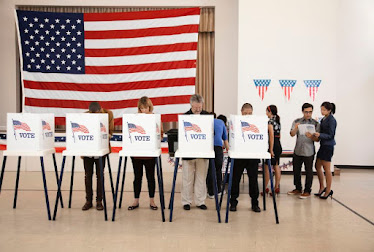 In Matthew 5:13-16, Jesus called His followers the “salt of the earth” and the “light of the world.” These are metaphoric expressions of the positive influence He expects His followers to have on the world in which they live.

The value of salt in Jesus' day was its use as a preservative to keep meat from spoiling. Light dispels darkness, a figure of speech for ignorance and falsehood. We fulfill these words of Jesus through our words, deeds, and prayers.

We also fulfill these words by being good citizens and voting for government leaders whose lives and policies are most conducive to our Christian mission and message of ultimate freedom and peace in Jesus Christ.

Paul, as well as Jesus, makes it clear that Christians have an obligation to be good citizens. Paul speaks of our duty to the governing authorities in Romans 13:1-7, and sums up his exhortation by saying, Render therefore to all their dues: tribute to whom tribute is due, custom to whom custom, fear to whom fear, honor to whom honor.

In his first letter to Timothy, Paul gave him guidelines for praying for governing authorities, and we can use his words as a guide for voting.  Paul told Timothy to pray with two clear goals in mind: (1) that we may lead a quiet and peaceable life and (2) that people may be saved and come to the knowledge of the truth.

Paul clearly wants a political situation wherein Christians are free to live out their faith without government interference, which we presently do not have. He also wants there to be freedom for the preaching of the Gospel, for he mentions how God wants all people to be saved and come to the knowledge of the truth.

If Timothy had had the privilege of voting for government leaders as we do, I am certain that Paul would have instructed him to vote as well as pray. We, therefore, can keep Paul's instructions in mind when we go into the voting booth. Although there are no perfect candidates, we can both pray and vote with Paul’s vision in mind.

Our goal is not to create an “official” Christian nation, but to be free to carry out the commission of our Lord to make disciples for Him in every nation (Matthew 28:18-20). When the people of this nation, or any nation, live by the teachings of Jesus and the New Testament, they will be a more peaceful and happy people. As Psalm 33:12 says, Blessed is the nation, whose God is the LORD.

To carry out this Great Commission, we need political leaders whose worldview and policies are favorable to the Christian mission and message of repentance toward God and faith toward our Lord Jesus Christ (Acts 20:21). This Christian mission will either be opposed or accommodated by those who are voted into power.

John Jay (1745-1829), whom George Washington appointed as the first Chief Justice of the U.S. Supreme Court, understood this. Jay was a New York lawyer, governor of New York, and a Founding Father. In 1812, he exhorted American citizens that it was their “duty” to wisely choose their leaders. He said,

Providence has given to our people the choice of their rulers, and it is the duty, as well as the privilege and interest of our Christian nation to select and prefer Christians for their rulers. National prosperity can neither be obtained nor preserved without the favor of Providence (Hyatt, America’s Revival Heritage 2nd Edition, 93).

It is both foolish and immoral for Christians to leave it to the secularists, socialists, and Marxists to choose those who will govern this nation. Such leaders would most surely oppose our Christian mission and message. Yes, American Christians have a moral obligation to vote in this election.

This article is derived in part from Dr. Eddie Hyatt's book, America’s Revival Heritage 2nd Edition, available from Amazon and his website at http://eddiehyatt.com. Eddie is the founder of the "1726 Project" whose purpose is to educate America about the impact of the Great Awakening (beginning in 1726) on the founding of America and the ending of slavery on this continent.