WHEN BENJAMIN FRANKLIN MADE CLEAR HE UNDERSTOOD BIBLICAL REPENTANCE AND FAITH 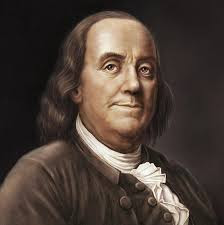 Although considered by many to be one of America’s most nonreligious founders, Benjamin Franklin exhibited a Biblical literacy that would put many modern pastors and ministers to shame, especially those who downplay repentance and accommodate sin in the name of "grace."

This is obvious in a 1735 letter he wrote to defend the young pastor of the First Presbyterian Church in Philadelphia who had been dismissed for allegedly emphasizing good works over faith in Christ’s atonement. Franklin was a member of this church, and in his letter defending the pastor, he made the following doctrinal statement.

Let us then consider what the Scripture Doctrine of this Affair is, and in a Word it is this: Christ by his Death and Sufferings has purchased for us those easy terms and conditions of our acceptance with God, proposed in the Gospel, to wit, Faith and Repentance: By his Death and Sufferings, he has assured us of God’s being ready and willing to accept of our sincere, though imperfect obedience to his revealed will; By his Death and Sufferings he has atoned for all sins forsaken and amended, but surely not for such as are willfully and obstinately persisted in . . . and that the ultimate End and Design of Christ’s Death, of our Redemption by his Blood, was to lead us to the Practice of all Holiness, Piety and Virtue, and by these Means to deliver us from future Pain and Punishment, and lead us to the Happiness of Heaven. This may (besides what has been already suggested) be proved from innumerable Passages of the holy Scriptures (Hyatt, 1726: The Year that Defined America, 139-40).

Franklin’s view, expressed above, was shaped primarily by his Puritan upbringing, and the Westminster Confession of Faith and Catechism, which was an important source of teaching and doctrine in Puritan homes. For a time, as a young man, Franklin entertained Deism, but returned to the faith of his parents and grandparents. He joined the First Presbyterian Church in Philadelphia whose theology was very close to that of the Puritans.

The Westminster Confession of Faith, which profoundly impacted Franklin, was formulated by reformists Puritans from England and Presbyterians from Scotland. They met at Westminster Abbey in London and completed their work in 1646. Next to the Bible, the Westminster Confession became the most widely read piece of literature in colonial America. Assent to it was required for entry into Harvard, Yale, and the College of New Jersey (now Princeton).

Franklin’s defense of his pastor reflects the doctrines expressed in the Westminster Confession, which emphasized faith in Christ alone for salvation and forgiveness of sins, but also true repentance in which one turns from a life of sin to a life of obedience toward God. Concerning repentance, it reads,

Repentance unto life is an evangelical grace, the doctrine whereof is to be preached by every minister of the Gospel, as well as that of faith in Christ. By it, a sinner, out of the sense not only of the danger, but also of the filthiness and odiousness of his sins, as contrary to the holy nature, and righteous law of God, so grieves for and hates his sins, as to turn from them all unto God, purposing and endeavoring to walk with Him in all the ways of His commandments.

This message of real repentance toward God, coupled with faith in Christ alone, was the message of the Great Awakening. Franklin, his good friend George Whitefield, and all the preachers of the Awakening would consider a person persisting in a lifestyle of sin to have never been born again. They agreed with Martin Luther who said, “We are saved by faith alone, but the faith that saves is never alone.”

In a day when repentance is too often ignored and God’s grace is used as an excuse for licentious behavior, we could learn a lot from America’s so-called “nonreligious” founder, Benjamin Franklin.

This article is derived from Dr. Eddie Hyatt's book, 1727: The Year that Defined America, available from Amazon and his website at www.eddiehyatt.com. This book documents how the Great Awakening had a direct bearing on the founding of this nation and ignited an abolition movement that led to the ending of slavery on this continent.