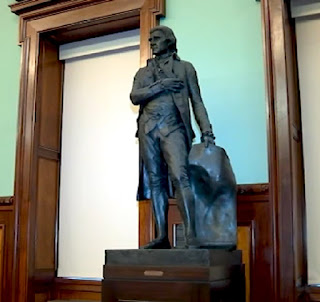 Driven by a political agenda and apparently clueless of historical context, the New York City Council members recently voted to remove a 7-foot statue of Thomas Jefferson (1743-1826) from their chambers, claiming it to be a symbol of slavery and racism. However, when seen in historical context, it is obvious that cancelling Jefferson is absolutely wrong.

The fact is that at a time when slavery was accepted and practiced in Africa, Asia, the Middle East and most of the world, Jefferson and virtually all of America’s founders took a public stand against it. This is clear from both their public statements and their private correspondence. Dr. Thomas Sowell, who happens to be black, has written of this saying,

Among those who turned against slavery in the 18th century were George Washington, Thomas Jefferson, Patrick Henry, and other American leaders. You could research all of 18th century Africa or Asia or the Middle East without finding any comparable rejection of slavery there (Hyatt, 1726: The Year that Defined America, 90).

The occasion for this surprising turn against slavery was the 18th century religious movement in colonial America known as the Great Awakening. This Awakening morally transformed the populace and ignited a powerful anti-slavery movment. By the time of the writing of the Declaration of Independence in 1776, virtually every founder had come to agree with John Adams who said,

Every measure of prudence ought to be assumed for the eventual total extirpation of slavery from the United States . . . I have throughout my whole life held the practice of slavery in abhorrence (Hyatt, Abolitionist Founding Fathers, 36).

Jefferson was the primary author of the Declaration of Independence and the nation’s third president. Although born in a slave-holding state and into a slave-holding family, he came to see the evils of slavery and began calling for its elimination, even while holding slaves. For example, in a document for Virginia delegates to the Continental Congress, Jefferson called for an end to the slave trade, writing, "The abolition of domestic slavery is the great object of desire in these colonies where it was unhappily introduced in our infant state."

In an early draft of the Declaration of Independence, Jefferson attacked the King of England and accused him of introducing slavery into the colonies, saying,

He has waged cruel war against human nature itself, violating its most sacred rights of life and liberty in the persons of a distant people who never offended him, captivating them and carrying them into slavery in another hemisphere (Hyatt, Abolitionist Founding Fathers, 44).

Although the above statement did not make it to the final draft, the one that did was generally understood as a direct attack on the institution of slavery. Jefferson wrote,

We hold these truths to be self-evident, that all men are created equal, that they are endowed by their Creator with certain unalienable Rights, that among these are Life, Liberty, and the pursuit of Happiness.

America’s founding generation understood this statement to be a declaration against slavery, and abolitionists used it in their attacks on the institution. Referring to America’s founding documents, Frederic Douglas declared, "Anyone of these provisions in the hands of abolition statesmen, and backed by a right moral sentiment, would put an end to slavery in America" (Hyatt, 1726: The Year that Defined America, 159).

Dr. Martin Luther King, Jr. also understood this phrase to be an attack on slavery. When someone suggested to him that he was an “extremist,” King replied, "Was not Thomas Jefferson an extremist? – ‘We hold these truths to be self-evident, that all men are created equal.’"

Indeed, in the 18th century, when slavery and serfdom were accepted throughout the world, the words of Jefferson were considered “extreme.”  When viewed in the context of the times, Jefferson and America’s founders were clearly on the cutting edge of human society in advocating for the abolition of slavery and liberty for all mankind. That is why contemporary efforts to cancel them are absolutely wrong.

This article is derived from the books, Abolitionist Founding Fathers and 1726: TheYear that Defined America, by Dr. Eddie L. Hyatt, who is an ordained minister and holds the Doctor of Ministry degree from the School of Divinity at Regent University. These and other books by him are available from Amazon and his website at www.eddiehyatt.com.