THE OCTOBER 31 POST THAT WENT VIRAL AND CHANGED THE WORLD 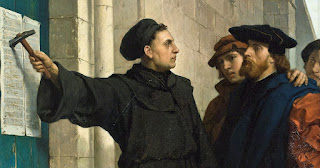 October 31 is a monumental day for Christians and the entire world, and it has nothing to do with Halloween. On October 31, 1517, a Roman Catholic priest nailed 95 theses to the Wittenberg, Germany church door and ignited the Protestant Reformation. He chose October 31 because it was the Eve of All Saints Day, a very important church holiday for Martin Luther.

In these 95 theses, Luther challenged his church’s practice of selling indulgences that offered forgiveness of sins and freedom from purgatory for a price. His act was parallel to a modern post on Twitter or Facebook, for the church door was a public forum where important announcements were posted.

His post went viral as virtually everyone in town read his post and shared and discussed it with others. More than one individual wrote down the post and took it to local printers where his statment was put in print and spread throughout the region, creating great excitement and controversy.

From there, Luther went on to challenge papal authority and the sacramental system of the Catholic Church with his teachings on justification by faith, the priesthood of all believers, and the ultimate authority of Scripture. Ordered by the Roman Church hierarchy to stop teaching these doctrines, Luther decided that he could not sacrifice truth for a superficial unity and promise of safety.

Because of his noncompliance, he was excommunicated from the Roman Catholic Church and charged with being a heretic, which was a capital crime. He was then ordered to appear before a tribunal of cardinals, bishops, princes, and the Roman Emperor. Held in the city of Worms, it was known as the Diet of Worms.

Standing alone before this imposing body of religious and civil authorities, Luther was ordered to recant his teachings or suffer the consequences, probably death. Should he comply for the sake of personal safety and a superficial unity? Or should he stand for what he knew was truth?

Luther told this court that he was willing to recant (comply) but only if he could be convinced by reason and the Scriptures that he was in error. The Roman hierarchy, however, was not in the habit of “reasoning” with those who challenged their authority, and they demanded that Luther admit his error there on the spot.

In his famous reply, which struck a blow for individual freedom and religious liberty, Luther defended what he had taught. Knowing his life was on the line, he boldly concluded his defense with these words.

I consider myself convicted by the testimony of Holy Scripture, which is my basis. My conscience is captive to the Word of God. Thus I cannot and will not recant anything, because acting against one's conscience is neither safe nor sound. Here I stand! I can do no other! God help me! Amen (Hyatt, To Comply or Not Comply, 29)!

Luther’s act of noncompliance was monumental and even secular historians understand its significance. After the year 2000, the editors of Life magazine listed what they considered to be the 100 most important events of the past millennia. Luther’s nailing of the 95 Theses to the Wittenberg Church door was listed at number two after the invention of the printing press in 1440, and ahead of the discovery of America by Columbus in 1492, which was listed at number three.

This artice was derived from Dr. Eddie Hyatt's latest book, To Comply or Not Comply, available from Amazon and and his website at www.eddiehyatt.com. Eddie is also the author of 1726: The Year that Defined America, which documents how America was birthed out of a great spiritual awakening that also brought about the end of slavery on this continent.