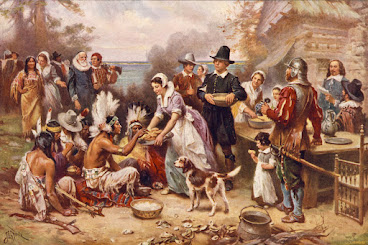 The unhinged rage in the media and in the streets against Kyle Rittenhouse indicates that their concern is not with justice but with revenge. Indeed, in a day when "justice" is too often used as a smokescreen to push a politicized social agenda or to seek vengenace on one's enemies, modern America could learn a lot from the Pilgrims. Their commitment to justice, based on moral principle, was on stark display when they executed 3 Englishmen for murdering a Native American.

From the beginning, the Pilgrims sought cordial and mutually beneficial relationships with the native people. Shortly after their arrival in the New World they met the English-speaking native, Squanto, who then introduced them to Massasoit, who was Chief of the Wampanoag. The Wampanoag tribe was the most powerful in the region.

William Bradford, governor of Plymouth, tells how he and Massasoit had a very cordial visit and agreed on a peace treaty, promising mutual friendship and security. They also agreed to defend each other if either was attacked by outside forces.

Massasoit and at least ninety of his people participated with the Pilgrims in the Thanksgiving festivities that Governor Bradford called for in the fall of 1621. They provided provided deer for food and participated in the games of competition during the three days of festivities.

Much interaction, both commercial and personal, opened between the Pilgrims and the natives in that region. One Pilgrim wrote back to family and friends in England,

We have found the Indians very faithful in their covenant of peace with us, very loving and ready to pleasure us. We often go to them, and they come to us. And we, for our parts, walk as peaceably and safely in the wood as in the highways of England (Hyatt, The Pilgrims, 37).

According to Dr. Samuel Eliot Morrison, late professor of history at Harvard University, the Pilgrims treated the native people of New England with “a combination of justice, wisdom, and mercy.”

In 1630, ten years after the Pilgrims had arrived, a mass exodus of Puritans from England to New England began because of a new wave of persecution. Most were devout people of faith but mixed in with them were some bad apples who came to escape trouble in England or were just looking for adventure.

In 1638, three such characters were involved in the murder of a Native American from Rhode Island whom they encountered in their travels. One of their number stabbed him several times with a knife and they took the furs and beads he had obtained in trading. They left him for dead, but he revived and was able to make it back home to Rhode Island where he died shortly thereafter.

The wounded man’s people, the Narragansett, complained to the Massachusetts Bay Colony that had been founded in 1630 by John Winthrop. The officials of the Bay Colony decided that the crime had occurred within the jurisdiction of the Plymouth Colony, and they turned the case over to Bradford and the Pilgrims.

Bradford sent several Pilgrims to Rhode Island to interview the man before he died, and he told them who had attacked him. The three men were arrested and tried before a jury in Plymouth. As evidence was produced before the jury, the three Englishmen all confessed to the crime.

The Pilgrims believed that all human beings possess a unique dignity and value, not possessed by other creatures, because of being created in the image and likeness of their Creator (Genesis 1:26-27). Because of the unique value of human life, the Pilgrims believed that anyone who would take another’s life without just cause, such as self-defense, should forfeit his own life (Genesis 9:6).

The jury found the three men guilty of murder and, therefore, condemned them to be executed by hanging for their crime. Many of the murdered man’s people came to observe the execution at the invitation of the Pilgrims. Bradford said the proceedings gave to them, and all the country, much satisfaction believing that justice had been done.

This incident shows that the Pilgrims viewed the native people as human beings created in the image and likeness of God and worthy of the same respect and just treatment as Englishmen. It shows the Pilgrims’ unwavering commitment to justice and demonstrates that they did not show respect of persons in applying the moral principles to which they adhered.

We live in a day when "justice" is touted, but is too often tainted and thwarted by political and ideological hatred. We could learn a lot from the Pilgrims about justice that is rooted in transcendent moral principles and therefore not subject to personal prejudices and political vendettas.

This article is derived from Dr. Eddie Hyatt’s book, The Pilgrims, available from Amazon and his website at www.eddiehyatt.com. Eddie is also the author of 1726: The Year that Defined America, which documents how the 18th century "Great Awakening" in colonial America had a direct bearing on the founding of this nation and the abolition of slavery on this continent.