HOW SOCIALISM ALMOST DESTORYED THE PILGRIMS 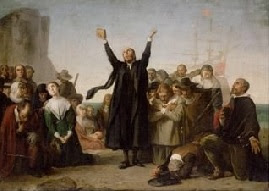 Before the Soviet Union, Cuba, and Venezuela, socialism was tried here on American soil by the Pilgrims and it miserably failed.

The Pilgrims were funded in their journey by a group of English businessmen who required them to live communally for seven years until their debt was repaid with interest. This meant that there was no private ownership and there were no individual rewards for their labor.

Instead, everyone worked fields owned by the plantation. The harvest went into a common fund from which each family received an equal portion for their sustenance. The remainder was used to pay their debt. The same was true of goods and money obtained by fishing and trapping furs. The wealth went into a common fund and everyone received an equal portion for their labor.

In this socialist system, everyone was equal but also miserable.

The Pain of Socialism

William Bradford, who served as Governor of Plymouth for over thirty years, told of the challenges of this socialist system. Young men, he said, resented getting paid the same as older men when they did so much more of the work. As a result, they tended to slouch and give only a half-hearted effort since they knew they would receive the same, no matter how hard they worked.

The older men felt they deserved more honor and recompense because of their age and experience. They resented getting paid the same as the youngsters in their midst. Bradford said that the women often refused to go to the fields to work, complaining of headaches, and to have compelled them to go would have been considered tyranny and oppression.

This socialist system discouraged work and innovation. It also produced strife and dissension, which further robbed the inhabitants of energy and output. The system almost destroyed the colony.

When it became obvious that lack and, perhaps, starvation would be their lot, Bradford and the leaders of the colony decided to make a change. After much prayer and discussion, they decided to dispense with that part of the agreement that required them to live communally and to replace it with a free enterprise system.

The Gain of Free Enterprise

According to Bradford, they then divided the land around them, allotting to each family a certain portion that would be theirs to work and use for their own needs. Bradford said there was an immediate change. The young men began to work much harder because they knew they would enjoy the fruit of their own labors. There were no more complaints from the older men for the same reason. And now the women were seen going into the fields to work, taking the children with them, because they knew that they and their families would benefit personally.

Instead of lacking food, each family now grew more food and corn than they needed, and they began to trade with one another for furnishings, clothes, and other goods.

They also had enough excess to trade with the Indians for furs and other items. In short, the colony began to prosper when it got rid of its socialist form of government and implemented a free, entrepreneurial system. Of their experience with socialism, Bradford wrote,

This [socialist] community was found to breed much confusion and discontent and retard much employment that would have been to their benefit and comfort . . . and showed the vanity of that conceit of Plato's, and applauded by some of later times, that the taking away of property and bringing in community into a commonwealth would make them happy and flourishing; as if they were wiser than God.

We Must Learn from History

Bradford believed that socialism does not work because it runs counter to human nature as created by God. In Scripture, God rewards individuals for their labor and good works. Capitalism works because it is compatible with the reality of human nature and the world in which we live.

Since the Pilgrims, there have been many stark examples of the failures of socialism. In fact, there is not a single example of socialism/Marxism having produced a happy and prosperous people. We should, therefore, remember the words of Winston Churchill, “Those who do not learn from history, are doomed to repeat it.”

This article was derived from The Pilgrims  and 1726: The Year that Defined America by Dr. Eddie Hyatt and are available from Amazon and his website at www.eddiehyatt.com.