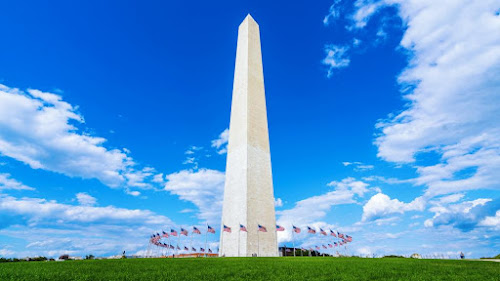 A committee formed by the Democrat mayor of Washington D.C. has just issued their report that includes a recommendation that the federal government "remove, relocate, or contextualize" the Washington Monument, the Jefferson Memorial, and other national monuments. This is the fruit of the "1619 Vision" of America.

The former interprets everything in the light of 1619 when the first African slaves were brought to America. The latter interprets everything in the light of 1726 when God’s grace was poured out on colonial America in a great, spiritual awakening. This Great Awakening gave birth to this nation and to a powerful anti-slavery movement that eventually brought about the end of slavery on this continent.

Will it be 1619 or 1726? Our future will be determined by the vision we embrace, for as George Orwell said, Whoever controls the past controls the future.”

Embracing the “1619 Vision” will lead to the America of Washington, Jefferson, Lincoln, and King being trashed and substituted with a godless, socialist/Marxist state. Embracing the “1726 Vision” will, on the other hand, lead to a turning to God as the Source for national peace, prosperity, and reconciliation.

During the summer of 2019, I experienced a deep, ongoing stirring in my spirit to produce a new book with the explicit purpose of showing that it was the Great Awakening, beginning in 1726, that unleashed the spiritual and moral forces that brought about the end of slavery on this continent. I knew I was to document that America was defined by this Christian awakening.

As I proceeded with this assignment, I read about the New York Times’ “1619 Project” and their attempt to “reframe” American history in light of 1619. In their new and novel paradigm America’s true founding was 1619, not 1776. For them, this means that slavery is what defines America and she is bigoted and racist at her core.

I then realized that the Spirit of God was bringing forth the answer and alternative to 1619. Yes, 1619 could have defined America, but in 1726 God began pouring out His grace on the colonists with a mighty outpouring of the Holy Spirit.

Because of 1726 America became defined as a land of Christians, missionaries, philanthropists, and churches. This was noted by the U.S. Supreme Court in the 1892 ruling, “Church of the Holy Trinity vs. the United States.” After reviewing thousands of historical documents, the nation’s highest court declared,

The churches and church organizations which abound in every city, town, and hamlet; the multitude of charitable organizations existing everywhere under Christian auspices; the gigantic missionary associations, with general support, and aiming to establish Christian missions in every quarter of the globe. These, and many other matters which might be noticed, add a volume of unofficial declarations to the mass of organic utterances that this is a Christian nation (Hyatt, 1726: The Year that Defined America, 170).

While we must recognize and acknowledge our nation’s flaws, we must reject the “1619 Vision” of America. It is a vision of  gloom that sees only the bad in America's past and seeks to erase our history in order to impose a new and radical socialist agenda. The D.C. mayor and her committee have obviously embraced the 1619 Vision.

The “1726 Vision,” on the other hand, is a vision of light and hope. It sees God’s hand in America’s history. From the landing of the Pilgrims at Plymouth in 1620 to the Great Awakening that began in 1726 to the miraculous defeat of the British in 1781 to the Emancipation Proclamation by Lincoln in 1862, we see the hand of God on this land.

The “1726 Vision” sees America as a land raised up by God to be a bastion of faith and freedom in this world. Because of 1726, succeeding generations turned to God during times of national crises and saw a Second Great Awakening, a Third Great Awakening, and ongoing local and regional revivals

Yes, it is time to embrace 1726 and pray that the same God that gave birth to this land and preserved her in times past, will intervene once again in His mercy and grace. As we remember 1726 and turn to Him with all our hearts, He will answer, as He has promised, and once again heal our land.

Vice-President Mike Pence understands the vital importance of embracing the 1726 Vision for America. He took his oath office with the Bible purposely opened to II Chronicles 7:14, which reads,

If My people who are called by My name, will humble themselves and pray, and seek My face, and turn from their wicked ways, then I will hear from heaven, and will forgive their sin and heal their land.

Dr. Eddie Hyatt's book, 1726: The Year that Defined America, is available from Amazon and his website at www.eddiehyatt.com. He is also the author of 5 Reasons I Changed my Mind About Donald Trump, also available from Amazon and his website. He is the founder of the "1726 Project" whose purpose is to educate America about her overt Christian roots in spiritual awakening.
Posted by Eddie Hyatt at 8:39 AM