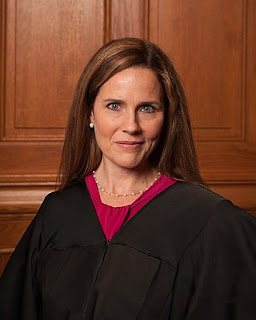 Democrats are once again in a frenzy over the faith of President Trump’s nominee to the Supreme Court, Amy Coney Barrett. The last time was 2017 when Barrett went through the confirmation process to serve on the Seventh District Court of Appeals.

At that time Democrat senators grilled her about her faith and insinuated that her strong faith in God disqualified her from serving on the court. Senator Diane Feinstein expressed her “concern” that when she listens to Barrett, “It is obvious that the dogma lives loudly within you.”

This should not be surprising since for several years the Democrat Party has been moving away from faith in God as a fundamental principal of their party. At the 2012 Democrat Party National Convention the audience loudly booed when the leaders decided to leave a reference to God in their platform.

Then, in 2019, the Democrat National Committee unanimously passed a resolution affirming atheism and declaring that neither Christianity nor any religion is necessary for morality or patriotism. In other words, “We don’t need God!”

It is, therefore, not surprising that Democrats are going after Barrett’s faith. Their reprehensible actions, however, are completely out of sync with America’s founders and the history of the Supreme Court.

America’s founders did not want a Constantinian state church like the nations of Europe, but they were all in agreement that only Christianity provided the moral and intellectual underpinnings for a stable and prosperous society. George Washington made this clear in his Farewell Address after serving two terms as the nation’s first president. He said,

Of all the dispositions and habits which lead to political prosperity, religion and morality are indispensable supports. In vain would that man claim the tribute of patriotism, who should labor to subvert these great pillars of human happiness, these firmest props of the duties of men and citizens (Hyatt, 1726: The Year that Defined America, 165).

When the founders speak of “religion” they are referring to Christianity and notice that Washington does not speak of religion [Christianity] as something to be merely “tolerated,” but something that is “indispensable” to the nation’s success.

In a direct rebuke to the modern Democrat party, Washington went on to say that we should never suppose, “that national morality can prevail in exclusion of religious principle.”

How far the Democrat party has moved away from Washington and America’s founding generation!

Jay was an abolitionist and founded the New York Manumission Society in 1785, which organized boycotts against newspapers and merchants involved in the slave trade and provided legal counsel to free blacks. While serving as governor he was able to get passed an emancipation law freeing all slaves in New York.

Jay’s moral and political views were rooted in his Christian faith, which he did not hide. He once publicly declared,

Unto Him who is the author and giver of all good, I render sincere and humble thanks for His manifold and unmerited blessings, and especially for our redemption and salvation by His beloved Son. Blessed be His holy name.

Jay, like most of America’s founders, believed that only Christianity offered the moral principles that would undergird a stable society. That is the basis for his recommendation to American citizens in 1816 that they choose Christians for their leaders. He said,

Providence has given to our people the choice of their rulers, and it is the duty, as well as the privilege and interest of our Christian nation to select and prefer Christians for their rulers (Quoted in Federer, America’s God and Country, 318).

Democrats, like Senator Feinstein, who are so concerned about Barrett’s faith would obviously have even greater concerns about America’s first Chief Justice whose faith “lived loudly in him.”

The faith also lived loudly in America’s second Supreme Court Chief Justice, John Marshall (1755-1835). Marshall, who served as Chief Justice for thirty-four years between 1801-35, is considered by many to be the greatest Chief Justice the court has known.

In one of his writings, Marshall clearly states what every founder assumed--that the founding documents and institutions on which the nation was formed presuppose a commitment to Christian principles and values. He wrote,

No person, I believe, questions the importance of religion in the happiness of man, even during his existence in this world. The American population is entirely Christian, and with us Christianity and religion are identified. It would be strange, indeed, if with such a people, our institutions did not presuppose Christianity, and did not refer to it, and exhibit relations with it (Hyatt, 1726: The Year that Defined America, 169).

So, each Sunday the singing of Christian hymns and the preaching of God’s Word could be heard ringing through the chambers of both the House of Representatives and the Supreme Court. This was neither surprising nor offensive to anyone, for it fit perfectly within the mindset of America’s founding generation.

In the 1892 case of Church of the Holy Trinity vs The United States, the nation’s highest court, after examining thousands of historical documents, declared America to be a Christian nation.

Concerning those documents, the court wrote, “There is a universal language pervading them all, having one meaning. They affirm and reaffirm that this is a religious nation.” The court went on to say,

The churches and church organizations which abound in every city, town, and hamlet; the multitude of charitable organizations existing everywhere under Christian auspices; the gigantic missionary associations, with general support, and aiming to establish Christian missions in every quarter of the globe. These, and many other matters which might be noticed, add a volume of unofficial declarations to the mass of organic utterances that this is a Christian nation (Hyatt, 1726: The Year that Defined America, 170).

Should Christians Remain in the Democrat Party?

The opposition to Judge Barrett is both unconstitutional and un-American. It highlights how far the modern Democrat party has moved away from America’s founding and her history.

It also demonstrates the party’s turn from God and raises the question of whether Christians should remain in such a party. I am reminded of God’s word to His people who were in [spiritual] Babylon. Come out of her My people, lest you share in her sins, and lest you receive of her plagues (Rev. 18:4).

This article is derived from Dr. Eddie Hyatt's book, 1726: The Year that Defined America, which is available from Amazon and his website at www.eddiehyatt.com. He is also the founder of the "1726 Project" dedicated to informing the nation about America's birth out of the Great Awakening and calling for prayer for another national, spiritual awakening.