How Grace Overcame Sin and Slavery and Defined America 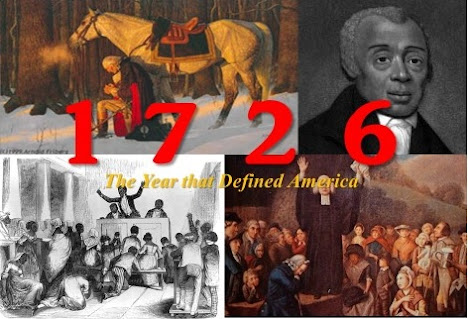 President Trump has just appointed a "1776 Commission" to counter the "1619 Project," which many believe is turning an entire generation of young people against America. Many believe it is a contributing factor to the anti-police and anti-American demonstrations that are occurring throughout the land.

The “1619 Project,” produced by the New York Times, presents a dark and gloomy picture of America. The curriculum claims that 1619, when the first African slaves were brought to this land, marks the true founding of America, not 1776. According to this paradigm, slavery defined America and the nation is racist and corrupt at its core and in need of radical fundamental change.

In my recent book, 1726, I present a different view that is rooted in grace. Romans 5:20 says, But where sin abounded, grace abounded much more, and this was certainly true of America's origins.

Slavery could have defined America, but in 1726 God began pouring out His grace in answer to the fervent prayers of His people. A Geat Awakening ensued that transformed Colonial America and unleashed the spiritual and moral forces that eventually brought about the end of slavery on this continent.

In the following essay, I present 5 truths that undermine the dark and gloomy 1619 view of America and show how America was defined by grace and 1726.

Truth #1
Slavery Was Not Unique to America

This is why Dr. Walter E. Williams, Professor of Economics at George Mason University, who is African-American, says that slavery in America was neither odd nor strange. He points out that at the beginning of the 19th century, “An estimated three-quarters of all people alive were trapped in bondage against their will either in some form of slavery or serfdom.”

What was unique about slavery in America, when compared with the rest of the world, was the brevity of its existence and the moral outrage that arose against it.

As documented in my book, 1726, a powerful anti-slavery movement emerged out of the great, spiritual awakening that rocked colonial America in the 18th century. In this “Great Awakening,” racial and cultural barriers were breached as blacks and whites worshipped together and shared the Gospel with everyone regardless of race or social status.

Second-generation Awakening preachers began to viciously attack the institution of slavery around 1750. Samuel Hopkins (1721–1803), for example, who had been personally tutored by Jonathan Edwards, pastored for a time in Newport, Rhode Island, an important hub in the transatlantic slave trade.

His response to slavery in Newport was like Paul’s response to the idols in Athens. Paul’s spirit was “provoked” by the idols of the Athenians, and Hopkins was deeply grieved by the "violation of God’s will” he saw in Newport. He declared, “This whole country have their hands full of blood this day.”

In 1774, after the First Continental Congress had convened in Philadelphia, Hopkins sent a pamphlet to every member of the Congress, asking how they could complain about “enslavement” to England and overlook the “enslavement” of so many blacks in the Colonies.

As “Liberty” was becoming a watchword throughout the Colonies, the preachers of the Awakening began applying it to the enslaved in America. Like Hopkins, they pointed out the hypocrisy of demanding freedom from England while continuing to tolerate the institution of slavery in their midst. The Baptist preacher, John Allen, thundered,

Blush ye pretended votaries of freedom! ye trifling Patriots! who are making a vain parade of being advocates for the liberties of mankind, who are thus making a mockery of your profession by trampling on the sacred natural rights and privileges of Africans (Hyatt, 1726:The Year that Defined America, 93-94).

Out of this Christian Awakening, the moral and spiritual forces were unleashed that would eventually bring about the end of slavery on this continent. This is the context behind the statement of the late historians, Elizabeth Fox-Genovese and Eugene Genovese, who wrote,

Europeans [and Americans] did not outdo others in enslaving people or treating slaves viciously. They outdid others by creating a Christian civilization that eventually stirred moral condemnation of slavery and roused mass movements against it.

As a result of the Great Awakening and the abolition movement it launched, America was at the forefront of the fight to end slavery in the 18th and 19th centuries. Dr. Thomas Sowell, who happens to be black, has written about this, saying,

Slavery was just not an issue, not even among intellectuals, much less among political leaders, until the 18th century–and then it was an issue only in Western civilization. Among those who turned against slavery in the 18th century were George Washington, Thomas Jefferson, Patrick Henry, and other American leaders. You could research all of 18th century Africa or Asia or the Middle East without finding any comparable rejection of slavery there (Hyatt, 1726:The Year that Defined America, 90).

Dr, Benjamin Rush of Philadelphia was a member of the Continental Congress and a signer of the Declaration of Independence. He became a passionate abolitionist and helped form America’s first Abolition Society in his hometown. He called on the ministers of America to take a bold stand against slavery, saying, “Slavery is a Hydra sin and includes in it every violation of the precepts of the Laws and the Gospels” (Hyatt, 1726: The Year that Defined America, 101).

Two years before the Constitutional Convention, Benjamin Franklin liberated his two slaves and began advocating for abolition. He joined the Abolition Society in Philadelphia and later served as its president.

George Washington’s situation was more complex. He had inherited a large plantation with a large number of slaves, and he realized that to thrust them suddenly and unprepared into the world would have been unwise, and perhaps, harmful to them.

To remedy the situation, Washington set up a compassionate program to disentangle Mt. Vernon from the institution of slavery. Those slaves who wanted to leave were free to do so. Those who chose to remain were paid wages, and he began a program to educate and prepare the children of slaves for freedom. Concerning abolition, he declared,

Not only do I pray for it, on the score of human dignity, but I can clearly foresee that nothing but the rooting out of slavery can perpetuate the existence of our union by consolidating it in a common bond of principle (Hyatt, 1726: The Year thatDefined America, 103).

Even those founders, such as Patrick Henry, who did not free their slaves admitted that it was sinful and wrong. By the time of the writing of the Declaration of Independence in 1776 and the Constitution in 1787, virtually every founder agreed with John Adams who declared,

Every measure of prudence ought to be assumed for the eventual total extirpation of slavery from the United States. I have throughout my whole life held the practice of slavery in abhorrence (Hyatt, 1726: The Year that Defined America, 101).

Yes, America’s founders were at the forefront of the fight to end slavery in the 18th century.

Truth #4
Blacks Fought Alongside Whites in the War for Independence

The Great Awakening and the interracial currents it unleashed opened the way for blacks to serve in the Revolutionary War. It was, no doubt, the influence of the Awakening that led George Washington to order his recruiting officers to accept free blacks into the ranks of the Continental Army.

As a result, by 1781 one in every seven soldiers was black. David Barton has provided documentation showing that numbers of blacks were given honorable discharges and pensions, and that some were honored with complete military funerals for their service in the Revolutionary War.

Because of the Awakening, there are no classifications based on race or skin color in America’s founding documents. Nothing in either the Declaration of Independence or the United States Constitution indicates that the freedoms guaranteed do not apply to every individual.

Dr. Martin Luther King, Jr. (1929–1968) understood this and in his stirring, I Have a Dream speech, he challenged America, not to dispense with her founding documents, but instead, to live up to them. Speaking from the steps of the Lincoln Memorial, he declared,

When the architects of our republic wrote the magnificent words of the Constitution and the Declaration of Independence, they were signing a promissory note to which every American was to fall heir. This note was a promise that all men, yes, black men as well as white men, would be guaranteed the "unalienable Rights" of "Life, Liberty and the pursuit of Happiness."

Then quoting from the Declaration of Independence, he proclaimed,

I have a dream that one day this nation will rise up and live out the true meaning of its creed: "We hold these truths to be self-evident, that all men are created equal” (Hyatt, 1726:The Year that Defined America, 122).

Yes, America’s founding documents are colorblind even if her history has not been. According to James Madison, the chief architect of the Constitution, this was purposeful for they felt it wrong to even mention slavery and thereby admit that there could be such a thing as human property.

America! America! God shed His grace on thee! Yes, because of God's grace poured out in the Great Awakening (and succeeding Awakenings), America became defined as a land of life and liberty with millions of people immigrating here from around the world. Included in this number are more than two-million immigrants from African nations who have chosen to make America their home.

As we remember 1726 and turn to Him with all our hearts, He will answer, as He has promised, pour out His grace, and heal our land once again according to II Chronicles 7:14.

This article is derived from Dr. Eddie Hyatt's book, 1726: The Year that Defined America, available from Amazon and his website at www.eddiehyatt.com. Dr. Hyatt supports The Return a global day of repentance and prayer on September 26. Get the details by clicking this link. https://thereturn.org/_eblasts/jonathan2/