3 MAJOR REASONS I CANNOT VOTE FOR A DEMOCRAT 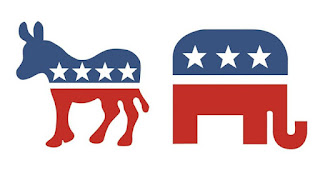 When Ronald Reagan left the Democrat party in 1962 at the age of 51, he explained his departure, saying, “I did not leave the Democrat party, the Democrat party left me.” If that was true for Reagan in 1962, how much more is it true for millions today who see the party of Roosevelt and Kennedy lurching into extreme left-wing positions that are contrary to their own morals and values.

Although I consider my myself an Independent with no party affiliation, the following are 3 major reasons I cannot vote for a Democrat.

Reason #1
No Respect for God

In 2019, the Democrat National Committee unanimously passed a resolution affirming atheism and insisting that neither Christianity nor any religion is necessary for morality and patriotism. In this same resolution, the DNC made a point to single out and rebuke evangelical Christians for, in their words, “loudly claiming that morals, values and patriotism must be defined by their particular religious views.”

This should not be surprising for at the 2012 Democrat Party Convention there were loud boos when party leaders decided to put mention of God back into the party platform after being roundly criticized for removing it. And when Democrats gained control of the House of Representatives in 2018, they chose to remove the phrase “so help me God” from the oaths witnesses would take before their committees.

The DNC’s hostile attitude toward people of faith is showing itself throughout the party. For example, in a senate confirmation hearing for Notre Dame professor, Amy Barrett, to serve on the Seventh Circuit Court of Appeals, Democrat Senator Diane Feinstein questioned her fitness because of her strong Christian faith. Feinstein expressed dismay that when she reads Barrett’s speeches, “The conclusion one draws is that the dogma lives loudly in you.”

The Democrat Party has supported the removal of Ten Commandment displays, crosses, and other Christian symbols from public property. When President Obama spoke at Georgetown University, a Catholic institution, he demanded that the Christian symbol behind the podium where he was to speak be removed.

The DNC flight from God is so out of character with the founders of this nation, whose writings are filled with references to faith in God and sprinkled with biblical quotations. In fact, a ten-year research project to discover where America’s founders got their ideas for the nation’s founding documents, found that they quoted the Bible far more than any other source (Hyatt, 1726: The Year that Refined America, 167-68).

George Washington, after insisting that he take the first presidential oath of office with his hand on a Bible, then warned the new nation in his first Inaugural Address,

The propitious smiles of Heaven can never be expected on a nation that disregards the external rules of order and right, which Heaven itself has ordained.

John Adams sounded a similar tone in a 1798 address to the officers of the Massachusetts Militia. He declared,

We have no government armed with power capable of contending with human passions unbridled by morality and religion . . . Our Constitution was made only for a moral and religious [Christian] people. It is wholly inadequate to the government of any other" (Hyatt, 1726: TheYear that Refined America, 168).

Psalm 33:12 says, Blessed is the nation whose God is the LORD. I cannot vote for a party or politician so long as disrespect toward God and people of faith characterize their party.

Reason #2
No Respect for Life

Just a short distance from where I live, a young woman gave birth to a baby in the bathroom of an Applebee’s restaurant. She then threw it in the garbage and left. According to a published report, the newborn’s lifeless body was found by employees who were cleaning the bathroom about 30 minutes after the mother left the restaurant.

How could someone be so calloused and inhumane about a new-born life? I do not know her situation, but perhaps she had heard of the Democrats in the New York state legislature breaking into cheers after passing a bill that allowed a mother to abort her baby right up to the time of birth.

Perhaps she had also heard of Governor Ralph Northam of Virginia promoting his pro-abortion bill and saying that if a baby survives an abortion, the infant will be made comfortable while the mother and her doctor decide if the newborn baby should live or die.

That people would cheer the passage of a bill that allows the taking of innocent human life is almost unimaginable. Yet not a single Democrat party leader spoke against these “death bills” that devalue human life and inculcate in our children a callousness toward life.

My Christian conviction that life is sacred, even in the womb, will not allow me to vote for any candidate or party that holds human life in such contempt.

Reason #3
No Respect for Liberty

This was not the case under the previous Democrat administration. Small business owners, such as florists and bakers, were targeted and then sued when they politely declined to violate their consciences by participating in same-sex weddings with their artistic gifts.

Aaron and Melissa Klein, owners of Melissa’s Cakes in Portland Oregon, sold their products to all customers regardless of race, religion, or sexual orientation. However, because they are Christians who believe marriage is between a man and a woman, they declined to create a special wedding cake for a lesbian for her same-sex wedding

Although this person could have easily found a baker to create the cake she wanted, she did not go that route. The goal was to force the Kleins to change their views, capitulate to the pressure and violate their conscience, or be punished and put out of business.

She filed a discrimination complaint with Oregon's Bureau of Labor and Industries. The Kleins were penalized $135,000 for refusing to create a government-approved message. The Oregon Court of Appeals upheld the ruling and they were forced to close their business. They lost their business and livelihood because they would not violate their conscience and sincerely held religious beliefs.

This should not be in America. This nation was founded on the values of tolerance, freedom of conscience, and religious liberty. The Democrat party longer holds to those values. They are willing to use government force to run roughshod over people’s consciences and sincerely held religious beliefs in order to further their own social and political agendas.

The Conclusion of the Matter

We live in a sinful, fallen world where no perfect church or preacher/pastor/pope is to be found this side of heaven. And if this is true of church and Christians, how much more is it true of politicians and political parties. I, therefore, am not looking for perection. I am looking for the politician or political party whose policies are most compatible with the values I hold dear.

After reading the platforms of both political parties and considering their policies, I have come to the conclusion that I cannot vote for a Democrat. It is not becasue I hate Democrats but for the reason stated by President Abraham Lincoln.

During the Civil War, a minister from the North expressed to President Abraham Lincoln his hope that “the Lord is on our side.” Mr. Lincoln replied,

I am not at all concerned about that . . . but it is my constant anxiety and prayer that I and this nation should be on the Lord’s side.

This article was derived from Dr. Eddie Hyatt's latest book, 5 Reasons I Changed My Mind About Donald Trump, available from Amazon and his website at www.eddiehyatt.com. The opinions expressed are his own and are not meant to represent any organization with which he is affiliated.