GETTING TO THE ROOT CAUSE OF GUN VIOLENCE IN AMERICA 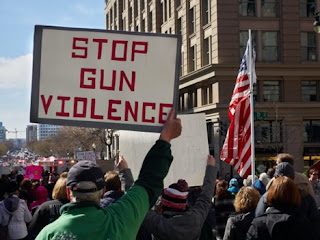 I strongly urge Biden and Harris to apply the same approach in dealing with gun violence in America. There are root causes feeding the problem and another gun law will be nothing more than a political band aid on the moral rot that is eating away at the soul of America.

For generations American children attended school without incident and without even the thought that their lives might be in danger. When I attended high school in the 1960s the major problems were chewing gum, talking in class, being out of your seat without permission, or being late with an assignment.

Those were the days, however, before the anti-Christian purge, beginning in the 1960s, that has secularized the public school system of America. Through an endless string of lawsuits, this purge has succeeded in removing almost every vestige of Christian influence, such as prayer, Bibles, and displays of the Ten Commandments and the Golden Rule from the public schools of America.

This purge, based on a distortion of the First Amendment, has played a major role in the violence engulfing America, and this was recently confirmed by a scientific study on the power of religious symbols.

The sociologist who led this study was interviewed by the liberal TV host, Charlie Rose, and one thing he said I will never forget. He said they discovered that a person sitting in a room with a Bible in view is less likely to tell a lie than if there is no Bible in the room. They found that the very presence of the Bible exuded a moral restraint.

This scientific study confirmed what many of us already knew. The forceful eviction of prayer, Bible reading, and displays of Scripture verses and the Ten Commandments has opened the door to all kinds of evil into the schools and culture of America. Without these religious and moral constraints, our culture has become rude, crude, amoral, and violent.

America’s founders did not want a government-sanctioned church like the nations of Europe, but they all agreed that only Christianity provided the positive impulses and moral restraints for a stable and prosperous nation. John Adams made this clear when he said,

We have no government armed with power capable of contending with human passions unbridled by morality and religion . . .  Our Constitution was made only for a moral and religious [Christian] people. It is wholly inadequate to the government of any other” (Hyatt, 1726:The Year that Defined America, 168).

In his Farewell Address, after serving two terms as America’s first president, George Washington warned the fledgling nation to cling to religion and morality, saying, “Of all the dispositions and habits which lead to political prosperity, religion and morality are indispensable supports.”

When the founders speak of “religion” they are referring to Christianity, and Washington does not say religion should be “tolerated,” but that it is “indispensable” for political peace and prosperity. Thomas Jefferson agreed and made Washington’s Address required reading at the University of Virginia, which he had founded.

Benjamin Franklin, considered one of America’s least religious founders, believed strongly that the teachings of Jesus and the New Testament were necessary for a stable society. When Thomas Paine, who had been influenced by the atheistic French Revolution, sent Franklin a manuscript in which he attacked belief in a prayer-answering God and other Christian doctrines, Franklin’s response was harsh.

Franklin refused to print the manuscript and suggested to Paine that he burn it before anyone else could see it. Franklin then said to Paine, “If men are this wicked with religion [Christianity], what would they be if without it.”

Yes, the founders all agreed that only Christianity provided the moral and intellectual framework for a stable society. This why the well-known Catholic scholar, William Novak, wrote,

Far from having a hostility toward religion, the founders counted on religion [Christianity] for the underlying philosophy of the republic, its supporting ethic, and its reliable source of rejuvenation (Hyatt, 1726: The Year that Defined America, 171).

Mr. President, Address the Root Cause

If President Biden and his administration are serious about wanting to stop gun violence, they must deal with the root causes. They must return to the "In God We Trust" principles on which this nation was founded and encourage religious expression once again in all our public and private institutions.

Dr. Eddie Hyatt is an author, historian, and ordained minister with a passion to see genuine spiritual awakening in America and around the world. This article was derived from his book, 1726: The Year that Defined America, available from Amazon and his website at http://eddiehyatt.com.