DOES AMERICA HAVE A SACRED HERITAGE? DR. KING THOUGHT SO! 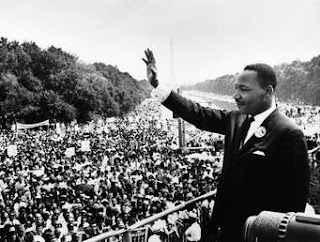 Dr. Martin Luther King, Jr. believed there was something holy and sacred about America’s founding. He obviously considered the Jim Crow south, where he lived and worked, to be a sharp departure from America’s founding vision. Writing in 1963 from the Birmingham city jail, Dr. King declared,

Our destiny is tied up with the destiny of America . . . We will win our freedom because the SACRED HERITAGE of our nation and the eternal will of God are embodied in our echoing demands.

Frederick Douglass (1816-1895), the former slave and passionate abolitionist, came to the same conclusion 100 years before Dr. King. In his early years, Douglass felt he had no part in America; but after years of investigation and research he completely changed his thinking. In a July 4th speech in 1852, Douglass called the U.S. Constitution “a glorious liberty document,” and declared,

Fellow Citizens, I am not wanting in respect for the fathers of this republic. The signers of the Declaration of Independence were brave men. They were great men too—great enough to give fame to a great age. It does not often happen to a nation to raise, at one time, such a number of truly great men.

Like King, Douglass discovered that at a time when slavery was accepted and practiced in most of the world, America’s founders took a bold stand against it. As the eminent Black scholar, Dr. Thomas Sowell, has said,

Slavery was just not an issue, not even among intellectuals, much less among political leaders, until the 18th century–and then it was an issue only in Western civilization. Among those who turned against slavery in the 18th century were George Washington, Thomas Jefferson, Patrick Henry and other American leaders. You could research all of 18th century Africa or Asia or the Middle East without finding any comparable rejection of slavery there (Hyatt, 1726: The Year that Defined America, 90).

History shows that it was a great Christian Awakening (1726-1770) in Colonial America that breached racial and cultural barriers and unleashed anti-slavery outrage throughout the Colonies. This Awakening resulted in virtually every Founding Father, even those who owned slaves, taking a public stand against it.

By the time of the writing of the Declaration of Independence in 1776 and the Constitution in 1787, virtually every Founder agreed with John Adams, America’s 2nd president, who declared,

As a result, America’s founders formulated founding documents that contain no classifications based on race or skin color. The words “slave” and “slavery” are nowhere to be found. Instead, the Constitution speaks of “citizens,” “persons,” and “other persons.”

Indeed, America’s founding generation understood America’s founding documents to be anti-slavery documents. Douglass came to this realization and wrote, “Anyone of these provisions in the hands of abolition statesmen, and backed by a right moral sentiment, would put an end to slavery in America” (Hyatt, Abolitionist Founding Fathers, 54-55).

Dr. King understood this original American dream of faith and freedom, which is why, in his iconic “I Have a Dream Speech,” he could say, “I still have a dream; it is a dream deeply rooted in the American dream.” He then declared,

When the architects of our Republic wrote the magnificent words of the Constitution and the Declaration of Independence, they were signing a promissory note to which every American was to fall heir. This note was a promise that all men, yes, black men as well as white men, would be guaranteed the "unalienable Rights" of "Life, Liberty and the pursuit of Happiness."

Dr. King made it clear that the problem the nation faced was not with her founding documents, but with the fact that succeeding generations had not lived up to the vision of equality and liberty the Founders had enshrined in those documents. He went on to say,

I have a dream that one day this nation will rise up and live out the true meaning of its creed: "We hold these truths to be self-evident, that all men are created equal.”

In my book, 1726: The Year that Defined America, I have shown how the Great Awakening (1726-70) revitalized Christian faith throughout the colonies, ignited an anti-slavery movement, and had a direct bearing on the founding of the nation and the formulation of her colorblind, anti-slavery founding documents.

Dr. King obviously knew this, which is why he did not rail against America's Founders, but sought to build on their legacy and the "Sacred Heritage" that they left. Let's pray that this current "woke" generation will learn from him and follow his example.

This article is derived from Dr. Eddie Hyatt’s books, 1726: The Year that Defined America and Abolitionist Founding Fathers, available from Amazon and his website at www.eddiehyatt.com.