ARE YOU A CHRISTIAN NATIONALIST? 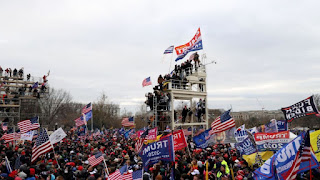 Charisma News reported on a letter, signed by 500 evangelical leaders, that condemned “Christian nationalism” and tied it to the Capital riots of January 6. I agree with the authors of the letter that all Christians need to speak out against all violence and hate and the detestable acts that took place in Washington D.C. on January 6.

However, while every evangelical I know condemns the acts of January 6, the authors of the letter seem to be using January 6 as a broad brush to paint every supporter of Donald Trump as an insurrectionist and supporter of white supremacy.

This, perhaps, should not be surprising since the authors of the letter actively campaigned against Trump and sought to turn evangelicals from him to Joe Biden in the 2020 presidential election. So, whatever their moral and theological concerns may be, they obviously have a political agenda as well.

A Christian Republic Is Not a Theocracy

Most Americans do not know the difference between a theocracy and a Constitutional Republic founded on Christian principles. America’s founders had a clear understanding of the difference and they rejected the former and created the latter.

Theocratic rulers claim a Divine right to rule over their subjects. Iran’s ayatollahs claim a Divine right from God to rule the citizens of that land. The “Divine Right of Kings” and the “Divine Right of the Episcopacy” were widely held beliefs in medieval Europe where monarchs and popes claimed to rule their subjects with God’s blessing and favor.

America’s founders held no such grandiose view of themselves or any human being. Influenced by the "dissenting Protestants," they rejected the claims of popes and monarchs and created a society that is free and open, but requiring a moral vision and expectation because of the flawed condition of human nature.

The Founders Believed in Original Sin

America’s founders held the traditional Christian view that the human condition is flawed by sin and cannot be trusted with power. They would agree with Sir John Acton who wrote, “Power corrupts; absolute power corrupts absolutely.”

This belief is clearly borne out in both their writings and their actions. “Take mankind in general,” said Alexander Hamilton, “they are vicious.” James Madison added, “If men were angels no government would be necessary.”

This same mindset is why George Washington prayed for forgiveness. In a prayer journal he kept in his twenties, Washington wrote,

Wash away my sins in the immaculate blood of the Lamb and purge my heart by Thy Holy Spirit . . . daily frame me more and more in the likeness of Thy Son Jesus Christ (Hyatt, 1726: The Year that Defined America, 132).

Historian, Benjamin Hart, is correct in saying, “A central assumption of America’s founders was original sin, meaning the corruption of man’s character.” That is why they divided the powers of government and instituted checks and balances to keep any one person or group from obtaining absolute power.

Freedom from theocratic rulers and government tyranny was an ideal that pervaded the thinking of America’s founders. However, because they held to the traditional Christian view of original sin, they knew that the populace, if not ruled from without, must be governed from within by moral and virtuous values.

William Penn, the founder of Pennsylvania, had said, “Those who will not be governed by God, must be ruled by tyrants.” The founders unanimously believed that only Christianity provided the moral values that would guard liberty and keep it from becoming a license for anarchy and sin.

That is why Christian chaplains were instituted in all the armed forces. It is why a chaplain was appointed to Congress and each session opened with prayer. It why George Washington insisted on taking the oath of office with his hand on a Bible.

It is why John Dickinson, founding father and chairman of the committee that produced the Articles of Confederation, warned that “when states lose their liberty, this calamity is generally owing to a decay of virtue.” And commenting on this fact, the Catholic scholar, William Novak, has said,

Far from having a hostility toward religion, the Founders counted on religion [Christianity] for the underlying philosophy of the republic, its supporting ethic, and its reliable source of rejuvenation (Hyatt, 1726: The Year that Defined America, 171).

By establishing the First Amendment that “Congress shall make no law concerning the establishment of religion or hindering the free exercise thereof,” the founders were making sure America would never have a theocratic state as in Islamic nations and as had been the case in Europe since the time of Constantine who corrupted the church by making it dependent on the state.

They were also removing the “civil power” from having any control over the expression of one’s faith. They all agreed with Thomas Jefferson who earlier had opposed the persecution of Baptist preachers in Virginia where the Anglican Church had been established as the official church while still a colony.

Jefferson proposed a bill removing the state’s sanction of Anglicanism and giving equal access and liberty to all sects and denominations. He wrote,

Almighty God hath created the mind free; and all attempts to influence it by temporal punishments or burdens, or by civil incapacitations, tend only to beget habits of hypocrisy and meanness, and are a departure from the plan of the Holy Author of our religion (Hyatt, 1726: The Year that Defined America, 148).

The profound influence of Christianity on America’s founding and history was understood as late as 1892 as expressed in the Supreme Court ruling of “Church of the Holy Trinity vs The United States.” After reviewing thousands of historical documents, the nation’s highest Court declared,

From the discovery of this continent to the present hour, there is a single voice making this affirmation, this is a religious people. There is a universal language pervading them all, having one meaning. They affirm and reaffirm that this is a religious nation . . .. The churches and church organizations which abound in every city, town, and hamlet; the multitude of charitable organizations existing everywhere under Christian auspices; the gigantic missionary associations, with general support, and aiming to establish Christian missions in every quarter of the globe. These, and many other matters which might be noticed, add a volume of unofficial declarations to the mass of organic utterances that this is a Christian nation.  (Hyatt, 1726: TheYear that Defined America, 170)

America’s founders did not institute a theocracy, but neither did they create a secular state. They rejected the idea of a state or national church like the nations of Europe but they embraced the teachings of Jesus and the New Testament as the only source of morality that would lead to a stable and peaceful society.

This was the thinking behind the statement of John Adams to his cousin, Zabdiel, who was a minister of the gospel. In a letter, written two weeks before the signing of the Declaration of Independence, Adams said to him,

Statesmen, my dear Sir, may plan and speculate for Liberty, but it is Religion and Morality alone, which can establish the Principles upon which Freedom can securely stand. The only foundation of a free Constitution is pure Virtue. You cannot therefore be more pleasantly or usefully employed than in the Way of your Profession, pulling down the Strongholds of Satan (Hyatt, 1726: The Year that DefinedAmerica, 164).

They Believed in the Power of Truth

Because America's founders believed in the power of truth, they had no thought of a "cancel culture." They agreed with John Milton who said,

Let truth and falsehood grapple. Who ever knew truth put to the worse in free and open encounter? She needs no policies, nor strategems, nor licensing to make her victorious. Give her but room.

The Conclusion of It All

However, I do know that Christianity and America were merged at its founding into a Constitutional Republic founded on Judeo-Christian values and principles. I also know that only another Great Awakening, that will restore the values of Jesus and the founding generation to our culture, is the only thing that will save America from the destructive path she is on.

This article is derived from Dr. Eddie Hyatt's book, 1726: The Year that Defined America, which documents how a great, spritual awakening unleashed the moral and spiritual forces that brought about the end of slavery on this continent and defined America as a land of faith and freedom. This book, and many others, are available from Amazon and his website at www.eddiehyatt.com.