A POST-RESURRECTION PARADIGM OF SPIRITUAL WARFARE 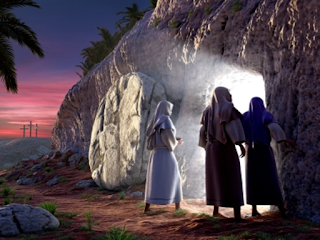 Jesus emerged from the tomb a mighty conqueror and declared, All authority is given to me in heaven and on earth. (Matt. 28:18). Many years ago, as a student in Bible school, a guest speaker asked a question that I never forgot. He read the above passage and then asked, “If Jesus has all authority, how much does that leave the devil”?

Resurrection Power for You

The overwhelming victory of Christ over Satan, and its significance for the believer, is delineated by Paul in Ephesians 1:15-23. In verse 19 Paul says the same power that raised Jesus from the dead and seated Him at God’s right hand is “toward” those who believe (NKJV).

The word “toward” is a translation of the Greek preposition eis, which literally means "into.” The NIV, NRSV, and NLT all translate eis as “for” those who believe. The obvious point is that the same mighty power that raised Jesus from the dead and seated Him at God’s right hand is directed into us and is for us who believe

And here is what is incredible! Paul says that the same resurrection power that did all this in Christ is now directed into and for those who believe. No wonder Satan trembles at the child of God who knows his/her position and authority in Christ.

A Cosmic Shift Has Occurred

Some years ago I listened to the late T.L. Osborn, the father of modern miracle evangelism, tell of preaching in a large outdoor crusade in Africa. Among the many thousands in attendance were hundreds of witch doctors who had come there to work their fetishes and cast their spells on the foreign preacher.

Before going on the platform, a group of pastors wanted to lay hands on him and pray that God would protect him from the devil. T.L. said, "I would not allow them. I would would not dishonor my Lord that way."

T.L. preached the Good News of Jesus and His resurrection that day and thousands came to Christ and many testified of being miraculously healed. And some preachers realized in a new way that they did not have to be afraid of the devil.

T.L had what I call a post-resurrection paradigm of spiritual warfare. Too many today are operating out of a spiritual warfare paradigm that is rooted in the Old Testament where a demonic prince was able to hinder even Gabriel from delivering a message to Daniel (Daniel 10:12-13). That story, however, is from a former era and should never be applied to this post-resurrection era in which we now live.

We must understand that an incredible cosmic shift occurred when Jesus arose from the dead and then ascended to the right hand of God. Satan was not annihilated but his defeat was absolute, complete, and final. Let us today walk in that victory that is ours through His glorious resurrection.

Dr. Eddie Hyatt is an author, historian, and Bible teacher with a God-given vision for another Great Awakening in America. His book, 1726: The Year that Defined America, documents how the First Great Awakening had a direct bearing on the founding of America and unleashed the moral and spiritual forces that brought about the end of slavery on this continent. His many books are available from Amazon and his website at www.eddiehyatt.com.