WHEN GEORGE WHITEFIELD REJECTED A PERSONAL PROPHECY FROM JOHN WESLEY 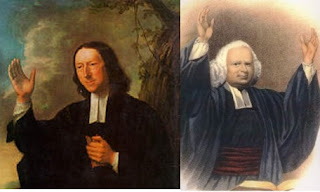 A personal prophecy should always confirm what we already know in our hearts. It is dangerous to build one’s life and make important decisions based solely on prophecies. This was dramatically illustrated in the lives of two of the greatest revivalists of all time.

Twenty-six-year-old George Whitefield sat on a ship ready to sail for America from the port of Deal, located approximately 70 miles southeast of London. For some time, he had experienced a compelling call to preach the gospel to colonial America and now the day for his departure had finally arrived. His heart was filled with gratitude, excitement, and expectation.

As he waited for the ship's crew to hoist anchor and sail, a letter was delivered to him from John Wesley who had just returned from Georgia. He opened the letter and was stunned by what he read.

Wesley had written, “When I saw God, by the wind which was carrying you out, brought me in, I asked counsel of God. His answer you have enclosed.” The message Wesley had enclosed was, “Let him return to London.”

Whitefield was shocked and momentarily confused. Wesley was ten years his senior and had been a mentor to him. He held the Wesley brothers, John and Charles, in very high esteem. However, this word from John contradicted everything he believed about his call to America.

He Finds the Answer in God’s Word

As he prayed there came to his mind a story from the Old Testament where a prophet lost his life because he listened to the words of another prophet instead of diligently adhering to what God had told him.

I Kings 13 contains the story of an unnamed prophet to whom God spoke and instructed to go to Bethel and prophesy against the idolatrous altars that had been established there by King Jeroboam. God instructed him not to stop to eat or drink but to return directly home to Judah when he had completed his assignment.

Based on this directive from the Lord, the prophet went to Bethel. As he prophesied against the idolatrous altars as instructed, they miraculously split apart and the ashes were poured out on the ground. As a result of that miracle and a miracle of healing for King Jeroboam, the king invited the prophet to his home. He refused and recounted to the king what the Lord had told him.

But as he departed Bethel, an old prophet, who heard of what had happened, saddled his donkey and caught up with the prophet and invited him to his home to eat and drink. When the first prophet recounted to him what the Lord had instructed him, the old prophet said, I too am a prophet as you are, and an angel spoke to me by the word of the Lord, saying, “Bring him back with you to your house that he may eat bread and drink water.” The old prophet, however, was lying.

As Whitefield prayed about Wesley’s letter, this story was powerfully impressed on his mind and heart. He knew that God was highlighting to him the importance of obeying the directions he had received from the Lord and to not listen to this word from another party, even such a respected one as John Wesley.

Three Powerful Lessons From This Story

It turns out that Wesley had “cast a lot” concerning whether Whitefield should go to America. This was something Wesley and others practiced, if after diligent prayer they were unable to discern the will of God.

Hindsight is 20/20 and it is abundantly clear that Whitefield made the right decision in ignoring Wesley’s prophecy and sailing for America. He ignited the Great Awakening that transformed Colonial America and prepared her for statehood. Because of the massive crowds that attended his meetings, he became the most recognizable figure in colonial America and has been called “America’s Spiritual Founding Father.”

There are three powerful lessons to be derived from Whitefield’s experience:

2.    Prophetic utterances are to be tested, even when they come from the most esteemed among us.

3.    We must be confident in our own ability to hear God and know His will.

This article is derived from Dr. Eddie Hyatt’s latest book entitled, Prophets and Prophecy. The book is available from Amazon and his website at www.eddiehyatt.com.