THE AMAZING LEGACY OF THE PILGRIMS 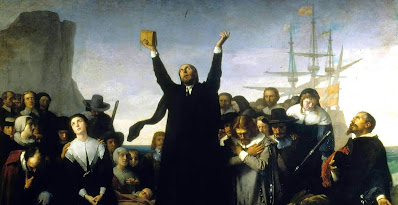 Four hundred years ago, on November 11, 1620, a small band of Christian reformers landed at Cape Cod in what is now the state of Massachusetts. These “Pilgrims” had left everything to pursue their vision of a restoration of New Testament Christianity and the establishment of a free society where they could live out their faith without government interference.

In his memoirs, William Bradford, who served as governor of Plymouth Plantation for over 30 years, described their first act upon setting foot on American soil. He wrote,

They fell upon their knees and blessed the God of heaven, who had brought them over the vast and furious ocean and delivered them from all the perils and miseries thereof (Hyatt, The Pilgrims, 31-32).

The Changing Story of the Pilgrims

Sadly, the true history of the Pilgrims is being revised by secularist historians who are removing the story of their faith. This was made real to me some time ago when I presented the “Revive America” seminar at the Abounding Grace Christian Church in Schenectady, New York. This is a PowerPoint presentation that documents the overt Christian origins of America out of the Great Awakening.

As I was preparing the presentation on the Pilgrims, I had a clear inner sense that I was to have the audience repeat after me the two reasons they gave, in the Mayflower Compact, for coming to the New World.

So, at the appropriate time that evening, I projected the Mayflower Compact on the big screen and asked the audience to repeat after me their two reasons for coming to this land. We all said together, not once, but twice: “Number one, for the glory of God; Number 2, for the advancement of the Christian faith.”

At the end of this presentation a young man came to me with his face aglow and excitement in his voice. He said,

I am attending the community college here and taking a course in early American history. Just this week the professor told us that the Pilgrims did not come here for religious reasons but for monetary reasons. BUT THERE IT IS IN THEIR OWN WORDS!

This young man’s testimony was another stark reminder of how America’s history is being revised and the element of faith being removed. This is serious, for as George Orwell said, “Whoever controls the past, controls the future.”

Alexander Solzhenitsyn, who spent 8 years in a Russian labor camp, wrote, “To destroy a people you must first sever their roots.” We must not allow an American generation to be severed from its Christian roots. The true story of the Pilgrims must be preserved for this generation and for those to come.

The Pilgrims’ love of religious liberty more than life itself has endeared them to the hearts of generations of Americans. Indeed, we can thank the Pilgrims for the First Amendment to the Constitution, which begins with these words, “Congress shall make no law concerning the establishment of religion or hindering the free exercise thereof.”

When Patrick Henry, in a 1775 speech advocating independence from Great Britain, declared, “Give me liberty or give me death,” he was expressing a Pilgrim, and American, value.

In a time when so many consider themselves “entitled” to a certain lifestyle and look to the government to make it happen, the Pilgrims remind us that only God can fulfill our deepest desires. By carving out a life alone in the New England wilderness, they also remind us of characteristics such as ingenuity, resilience, and self-reliance.

The Pilgrim legacy even includes our constitutional form of government. The historian, Benjamin Hart, says,

What Abraham Lincoln described as government “of the people, by the people and for the people,” was inherited from a tradition beginning with the Congregationalist Protestant settlement in Plymouth, Massachusetts, in the 1620s (Hyatt, The Pilgrims, 54).

Dr. Samuel Eliot Morrison, late professor of history at Harvard University, referred to the Pilgrims as "in a sense the spiritual ancestors of all Americans, and pioneers" (Hyatt, The Pilgrims, 58).

With 2020 being the 400-year anniversary of the Pilgrims’ landing at Cape Cod, I thought it appropriate to present an overview of the Pilgrims that highlights their faith, godly vision, and impact on America. This overview is found in the book, The Pilgrims, available from Amazon and at www.eddiehyatt.com.

Dr. Eddie L. Hyatt has a long history as a pastor, revivalist, and professor of theology in many parts of the world. His present commission is to call America back to its roots in Christian truth and Spiritual Awakening. His book, 1726: The Year that Defined America, makes the case for America's birth out of Christian values and the First Great Awakening. His books are available from Amazon and his website at www.eddiehyatt.com.