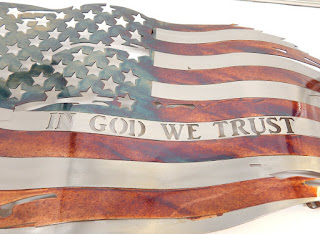 America's founders were far from perfect, but they established a nation on Judeo/Christian principles that they believed would serve as a moral compass to guide the nation through any difficulty or crisis she might encounter.

Dr. Martin Luther King, Jr. understood this and writing from the Birmingham city jail, where he had been incarcerated, he acknowledged the nation’s “sacred heritage” and declared it to be a basis for his confidence that his fight for racial equality would succeed. He wrote,

We will reach the goal of freedom in Birmingham, and all over the nation, because the goal of America is freedom. Abused and scorned though we may be, our destiny is tied up with the destiny of America . . . We will win our freedom because the SACRED HERITAGE of our nation and the eternal will of God are embodied in our echoing demands.

Dr. King was very aware of America’s flawed and sinful history, but he also saw that there was something sacred, holy, and of God in her founding. In this same letter he speaks with pride and respect of the Pilgrims, Thomas Jefferson, the ‘majestic” Declaration of Independence, and Abraham Lincoln.

Dr. King was not the first to believe that God had a hand in the birth of this nation. This was, in fact, a common belief from the time the first European immigrants came to this land seeking individual and religious liberty.

This belief was expressed in the numerous days of prayer and fasting proclaimed by the Continental Congress during the Revolutionary War. And after the British surrendered to the colonial forces on October 19, 1781, George Washington appointed Chaplain Israel Evans to deliver a thanksgiving sermon to the troops.

Joined by thousands of civilians, Rev. Evans exhorted the massive crowd before him to give thanks to God and he compared their victory over the British to God’s deliverance of His Old Testament people. In poetic verse he declared,

To Him who led in ancient days,
the Hebrew tribes, your anthems raise.
The God who spoke from Sinai’s hill,
protects His chosen people still.
Not in ourselves success we owe,
by help divine we crushed the foe.
With thankful hearts his goodness own,
and bow before Jehovah's throne.
(Hyatt, 1726: The Year thatDefined America, 119).

Concerning America’s birth, Benjamin Rush, a signer of the Declaration of Independence, declared that he, “as much believed the hand of God was employed in this work as that God had divided the Red Sea to give a passage to the children of Israel.”

James Madison, the chief architect of the Constitution, declared that it was impossible for any reasonable and pious person to not see in its formulation, “a finger of that Almighty hand which has been so frequently extended to our relief in critical stages of the Revolution” (Hyatt, 1726: The Year that Defined America, 127).

In a speech delivered at a Spirit of America rally in Atlanta, Georgia on January 26, 1984, President Ronald Reagan declared,

I've always believed that this blessed land was set apart in a special way, that some divine plan placed this great continent here between the oceans to be found by people from every corner of the Earth who had a special love for freedom and the courage to uproot themselves, leave homeland and friends, to come to a strange land. And coming here they created something new in all the history of mankind -- a land where man is not beholden to government, government is beholden to man.

This Generation Has Rejected this “Sacred Heritage”

Dr. King considered the opposition to his demands, and the ensuing turmoil it induced, to be signs that America had fallen away from her founding principles. She had lost sight of her “sacred heritage” and he called for a return to that founding vision of faith and freedom.

Each generation of Americans must, in fact, be taught of our country’s “sacred heritage,” for as Ronald Reagan said, “Freedom is a fragile thing and it's never more than one generation away from extinction.”

Each new generation likes to think that wisdom and virtue has begun with it and that former generations were inferior in virtue and understanding. This is the case in America today and was the case in Israel during the time of Jeremiah the prophet. In Jeremiah 6:16, the prophet declared to King Josiah and all the people,

Thus says the LORD: “Stand in the ways and see, and ask for the old paths, where the good way is, and walk in it; then you will find rest for your souls.

Just as Israel had strayed from the good way that had produced peace and prosperity, America has strayed from the way that made her the freest and most prosperous nation in history. She has departed from the founding principles that brought about the end of slavery, passed Civil Rights legislation, defeated Nazism, and brought down the evil Soviet empire.

The Biblical moral compass put in place by the founders has been trashed and in its place a secularist/Marxist ideology is being propagated in our schools, in colleges, in Hollywood, and in Washington, D.C. Now we are seeing the fruit of this departure as the nation unravels within, and without on the world stage.

The Way Forward from Here

All, however, is not lost! We can take back our land, but the church must arise. We must recover that “sacred heritage” of which Dr. King and America’s founders spoke.

Our challenge is that this “sacred heritage” is being demonized by those who want to transform America into a godless/Marxist state. They want to destroy this heritage because, as Karl Marx said, “People without a heritage are easily persuaded.”

We must, therefore, redouble our efforts to teach this generation about America’s “sacred heritage.” Understanding our “sacred heritage,” along with Biblical promises such as II Chronicles 7:14, will provide the solid foundation needed to pray succesfully for another Great Awakening to roll across our land like a mighty tsunami wave.

A good place to start learning about this “sacred heritage” is my book, 1726: The Year that Defined America, available from Amazon and my website at www.eddiehyatt.com.

Dr. Eddie Hyatt is a Bible teacher and church historian with a passion to see America experience another national, spiritual awakening that will turn the nation back to God and restore the founding principles of faith and freedom. His books are available from Amazon and his website at www.eddiehyatt.com