AMERICA'S FOUNDING DOCUMENTS DECLARED "HARMFUL" BY OUR OWN GOVERNMENT 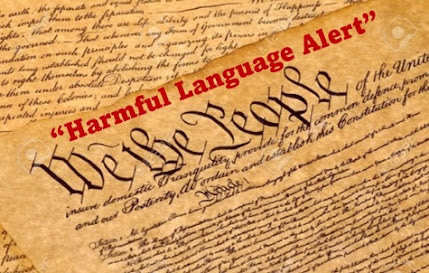 In a stunning capitulation to the Marxist crusade to transform America, the National Archives and Records Administration (NARA) has determined that America's founding documents may be "harmful or difficult" for some users.

They have, therefore, posted a “Harmful Language Alert” above their online catalog, which includes the Declaration of Independence, the U.S. Constitution, and other documents related to our founding.

With statues of George Washington and Thomas Jefferson being toppled, the 1619 narrative being taught in public schools, and now this official warning of potential “harm” in reading America’s founding documents, it is obvious that the Leftist agenda to demonize and destroy America’s heritage is at full throttle.

Marxists know that if they have any hope of transforming America into a socialist state, they must destroy America’s past. George Orwell said, “Whoever controls the past, controls the future.”

Karl Marx himself said, “People without a heritage are easily persuaded,” and Marxists in America have pulled out all the stops to destroy what Dr. Martin Luther King, Jr. called America’s “sacred heritage.”

King was very aware of America’s flawed history, but he was also aware that there was something sacred and special about America’s founding and her founding documents. In his “I Have a Dream” speech, he declared "I still have a dream. It is a dream deeply rooted in the American dream." He also called on America, not to dispense with her founding documents, but to live up to them.

Indeed, Dr. King considered these words of the Declaration of Independence, which he often quoted, to be a standard toward which all should strive.

We hold these truths to be self-evident, that all men are created equal, that they are endowed by their Creator with certain unalienable Rights, that among these are Life, Liberty and the pursuit of Happiness.

This outrageous act of the NARA is another wake-up call to all freedom-loving Americans to let your voices be heard. It is no time for silence. Here are 3 suggestions:

Begin now to join thousands of others in praying for another Great Awakening to roll across this land like a mighty tsunami wave.

Familiarize yourself with America’s true history that is rooted in faith and freedom. I have written several books on this topic that can be helpful including, 1726:The Year that Defined America, Abolitionist Founding Fathers, and Pilgrims and Patriots.

Don't be silenced. Boldly speak the truth in love.

Dr. Eddie Hyatt is an ordained minister, historian, and revivalist with a passion to see authentic spiritual awakening in this generation. His latest book, To Comply or Not Comply, offers a Biblical defense for Christians not complying with the governing authorities.  Visit his website @ www.eddiehyatt.com.