Then there appeared to them divided tongues, as of fire,
and one sat upon each of them.
Acts 2:3 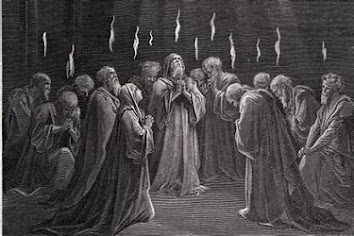 May 23 is Pentecost Sunday when much of the church world remembers the coming of the Holy Spirit on the day of Pentecost. Let's pray that they will also remember that there were no blue and pink tongues of fire distributed at Pentecost.

Luke, who wrote the Book of Acts, makes it clear that God made no distinction between the women and men who were in the upper room when the Holy Spirit came on the Day of Pentecost. That women were present is clear from Acts 1:14 where Luke says of those in the upper room, These all [the Twelve] continued with one accord in prayer and supplication with the women and Mary the mother of Jesus, and with His brothers (Acts 1:14).

It is also clear from this narrative that there was no segregated seating based on sex. Neither is there any indication of special seating according to rank. They mingled freely together as they prayed and waited for the Promise of the Father to be fulfilled in their midst (Acts 1:4).

God Made No Distinction at Pentecost

After the sound of a rushing mighty wind, Luke says, There appeared to them divided tongues as of fire and one sat on each of them (Acts 2:3). Bill Fish, pastor and Bible teacher from Pittsburg, PA, notes that God did not distribute blue tongues for men and pink tongues for women. He made no distinction.

When a multitude gathered and asked the meaning of this, Peter pointed them to the prophecy of the Old Testament prophet, Joel, who had predicted a time when the Holy Spirit would be given to all God’s people, including women. Peter said,

But this is what was spoken by the prophet Joel: “And it shall come to pass in the last days, says God, that I will pour out My Spirit on all flesh; your sons and your daughters will prophesy, your young men shall see visions, your old men will dream dreams, and on My menservants and My maidservants I will pour out of My Spirit and they shall prophesy” (Acts 2:16-17).

Spirit-Filled Women Were a Powerful Force in the Early Church

The women who came out of the Upper Room were a powerful force in early Christianity. This is evidenced by the fact that Saul of Tarsus, in his persecution of the church, targeted women as well as men. Luke says, As for Saul, he made havoc of the church, entering every house, and dragging off men and women, committing them to prison (Acts 8:3).

When Saul expanded the persecution outside Israel’s borders to Damascus, he found it necessary to obtain written authorization from the high priest. He made sure that the document gave him the right to arrest all followers of Jesus, whether men or women, that he might bring them bound to Jerusalem (Acts 9:1-2).

Saul knew that if he had any chance of stopping this Jesus movement, he would have to target the women as well as the men. This shows that those “Spirit-filled” women from the Upper Room were a powerful force in early Christianity.

In her book, In the Spirit We’re Equal, my wife, Dr. Susan Hyatt, documented that wherever there has been a new Pentecost—a new outpouring of the Holy Spirit-- women have emerged alongside men as leaders.

This is because the Holy Spirit makes no distinctions based on one’s sex. He distributes gifts on the basis of Christ’s redemptive work through which women, as well as men, were delivered from the ramifications of the Fall.

In the great 18th century Methodist revival, women were filled with the Holy Spirit and became powerful preachers and teachers. John Wesley reluctantly began commissioning them to preach because he could not deny that the Holy Spirit had anointed them to proclaim the Good News.

When someone challenged him as to why he commissioned women as well as uneducated men to preach the Gospel, Wesley replied, “Because God’s owns them in the conversion of sinners and who am I that I should withstand God.”

Women also emerged to the forefront of the early Pentecostal Revival. Lucy Farrow was a mentor and pastor to William Seymour in Houston before he went to Los Angeles. According to “Mother Cotton,” no one was filled with the Holy Spirit and spoke in tongues until Lucy Farrow followed him to Los Angeles and began praying and laying her hands on the people.

Many women were filled with the Holy Spirit at the Azusa Revival and went forth at evangelists, pastors, missionaries, and church planters. William Seymour tied what was happening in the lives of these women to Pentecost. The January 1908 edition of the Apostolic Faith, the official publication of the revival, carried this statement:

Before Pentecost, the woman could only go into the ‘court of the women’ and not into the inner court. But when our Lord poured out Pentecost He brought all those faithful women with the other disciples into the upper room and God baptized them all in the same room and made no difference. All the women received the anointed oil of the Holy Ghost and were able to preach the same as men. They both were co-workers in Eden and both fell into sin; so they both have to come together and work in the Gospel.

The Key To A New Pentecost

Much of the Church has refused to fully recognize the gifts of its female members and has, thereby, violated Paul's command in I Thessalonians 5:19 not to quench the Spirit. As a result of this disobedience, many gifts have lain dormant while millions have perished without Christ and the Church has languished in defeat.

I am convinced that if we are to see an earth-shaking outpouring of the Holy Spirit—a New Pentecost--in our day, we must open our doors and our hearts to the gifts and callings of the sisters in our midst. We must remember that there were no blue and pink tongues of fire distributed at Pentecost.

Dr. Eddie Hyatt is an author and ordained minister with a passion for authentic revival in the church today. This article was derived from his book, Paul, Women and Church, available from Amazon and his website at www.eddiehyatt,com. He is a board member of God’s Word to Women whose website is www.godswordtowomen.org.