CORRECTING THE TWISTED HISTORY THAT IS DESTROYING AMERICA 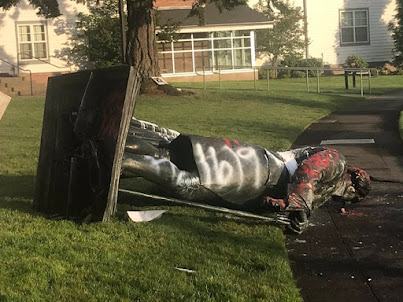 America's Founders are under attack. Their monuments are being toppled and their names removed from schools and other public buildings. Children are being taught that George Washington and Benjamin Franklin were evil, rich slaveowners who formed this nation to protect their wealth and maintain the institution of slavery.

This twisted history of America is dividing and destroying her. The truth is that at a time when slavery was being practiced in Africa, Asia, the Middle East, and many parts of the world, America’s founders turned against it. Dr. Thomas Sowell, who happens to be black, has written about this, saying,

Slavery was just not an issue, not even among intellectuals, much less among political leaders, until the 18th century–and then it was an issue only in Western civilization. Among those who turned against slavery in the 18th century were George Washington, Thomas Jefferson, Patrick Henry, and other American leaders. You could research all of 18th century Africa or Asia or the Middle East without finding any comparable rejection of slavery there (Hyatt, Abolitionist Founding Fathers, 9).

The late historians, Elizabeth Fox-Genovese and Eugene Genovese made the same observation, and wrote, “Perception of slavery as morally unacceptable — as sinful — did not become widespread until the second half of the eighteenth century.”

The Source of the Moral Outrage Against Slavery

The rise of this 18th century movement against slavery can be traced to the great, spiritual awakening that rocked Colonial America, beginning in 1726. Entire towns were morally transformed as evidenced by Benjamin Franklin’s description of this “Great Awakening” in his hometown of Philadelphia in 1739. He wrote,

From being thoughtless or indifferent about religion, it seemed as if all the world were growing religious so that one could not walk through the town in an evening without hearing psalms sung in different families of every street (Hyatt, Abolitionist Founding Fathers, 14).

Out of this Awakening racial and cultural barriers were breached and there arose a powerful anti-slavery movement as Awakening preachers began, not only to offer salvation to individuals, but to attack the institution of slavery as sinful and evil in the sight of God.

Samuel Hopkins (1721–1803), for example, was outraged by what he saw while pastoring in Newport, Rhode Island, an important hub in the transatlantic slave trade. He declared, “This whole country have their hands full of blood this day.”

In 1774, after the First Continental Congress had convened in Philadelphia, Hopkins sent a pamphlet to every member of the Congress, asking how they could complain about “enslavement” to England and overlook the “enslavement” of so many blacks in the Colonies.

Methodists, Baptists, Quakers, and Puritan preachers carried the fight against slavery even into the South and to slaveowners. This is what historian, Benjamin Hart was referring to when he wrote, “Among the most ardent opponents of slavery were ministers, particularly the Puritan and revivalist preachers.”

Thomas Jefferson called slavery a “moral depravity” and “hideous blot" and said it presented the greatest threat to the future survival of America. James Madison, America’s 4th president, called slavery "the most oppressive dominion ever exercised by man over man."

Dr. Benjamin Rush, a member of the Continental Congress and signer of the Declaration of Independence, was a passionate abolitionist who helped form the first Abolition Society in America in his hometown of Philadelphia. He said, “Slavery is a Hydra sin and includes in it every violation of the precepts of the Laws and the Gospels” (Hyatt, Abolitionist Founding Fathers, 38).

Benjamin Franklin, in 1785, liberated his two slaves and began advocating for abolition. He joined the Abolition Society in Philadelphia and later served as its president. He called slavery “an atrocious debasement of human nature.”

George Washington faced a more complex situation because of the size of the plantation and the number of slaves he had inherited. Nonetheless, he set up a compassionate program to completely disentangle Mt. Vernon from the institution of slavery. Concerning abolition, he declared,

Not only do I pray for it, on the score of human dignity, but I can clearly foresee that nothing but the rooting out of slavery can perpetuate the existence of our union by consolidating it in a common bond of principle (Hyatt, Abolitionist Founding Fathers, 42).

By the time of the writing of the Declaration of Independence in 1776 and the Constitution in 1787, virtually every founder, even those who owned slaves, agreed with John Adams, America’s 2nd president, who declared,

Dr. Martin Luther King, Jr. (1929–1968) understood this and in his stirring, I Have a Dream speech, he challenged America, not to dispense with her founding documents, but instead, to live up to them. Speaking from the steps of the Lincoln Memorial, he declared,

When the architects of our republic wrote the magnificent words of the Constitution and the Declaration of Independence, they were signing a promissory note to which every American was to fall heir. This note was a promise that all men, yes, black men as well as white men, would be guaranteed the "unalienable Rights" of "Life, Liberty and the pursuit of Happiness."

Secularists love to insist that America was founded on racist principles. They are wrong. The historian, David Azerrad, was correct when he said, “The argument that the Constitution is racist suffers from one fatal flaw; the concept of race does not exist in the Constitution.”

Not Perfect, But Worthy of Honor

America’s founders were born into a world where slavery had existed for thousands of years. They were not perfect and their writings sometimes reflect prevailing notions of the times. Nonetheless, they should be honored for the revolutionary stand they took against slavery at a time it was accepted and practiced all over the world.

Against the tide of history and world opinion, they created a nation based on the belief that “all men are created equal" and that they are "endowed by their Creator with certain inalienable rights such as life, liberty, and the pursuit of happiness.” They formulated founding documents that would eventually eradicate the institution they had come to abhor, and make America the land of the free and home of the brave, with people of every race and ethnicity wanting to live here.

This article is derived from Dr. Eddie Hyatt’s book, Abolitionist Founding Fathers, available from Amazon and his website at www.eddiehyatt.com. Eddie is also the founder of the “1726 Project” with the goal of educating America about her true origins in the First Great Awakening.