THIS TOO IS LOVE 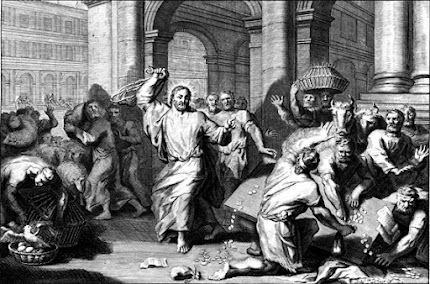 The nice, gentle Jesus of popular culture who is kind and sweet to everyone and reproves no one, is a caricature not found in Scripture. The Jesus of Scripture, while very compassionate, also confronts and rebukes, sometimes even in anger.

For example, Jesus was obviously infuriated at how the temple worship in Jerusalem had become merchandised. He made a whip, and with eyes blazing, entered the temple area, turning over tables, and shouting at the merchants to take their goods away from there. It is written, He shouted, “My house shall be called a house of prayer,” but you have made it a den of thieves (Matthew 21:13).

In Matthew 11:20-24, Jesus rebuked the cities where His greatest miracles had been done because they did not repent. He excoriated them, saying,

Woe to you Chorazin! Woe to you Bethsaida!  And you, Capernaum, who are exalted to heaven, will be brought down to hell; for if the mighty works done in you had been done in Sodom, it would have remained until this day. But I say to you it shall be more tolerable for the land of Sodom in the day of judgment than for you.

In Matthew 23 Jesus lets loose His anger on the religious leaders of the day calling them “hypocrites” and “blind guides.” He sums up His anger toward them in verse 32, exclaiming, Serpents, brood of vipers! How can you escape the damnation of hell.

This too is love for His anger was directed at those who were distorting truth, misusing God's people, and rejecting God's ultimate visitation to them in Himself.

The picture of Jesus as this soft, effeminate person who would never offend or confront anyone about their life is nowhere to be found in Scripture. He is, instead, the epitome of strength and self-confidence, willing to confront where there is injustice and wrong. He is very compassionate toward sinners, but never affirms them in their sin.

For example, to the woman whom the Pharisees brought to Him saying she was caught in the act of adultery, Jesus showed great compassion and forgiveness but instructed her to, Go and sin no more (John 8:11). To a man He had earlier healed of paralysis, Jesus found Him in the temple and warned, Sin no more lest a worse thing come upon you (John 5:14).

Jesus wants the best for everyone, but He recognizes the reality of sin and evil in the world, which robs us of His best. His love confronts these destructive attitudes and behaviors. To the believers in Ephesus who had tolerated sinful, destructive behavior, Jesus exhorted, As many as I love, I rebuke and chasten, be zealous therefore and repent (Revelation 3:19).

The challenge we face in communicating God’s love to this generation is that their concept of love has been shaped, not by the Bible, but by Hollywood and the entertainment industry. When we say, “God loves you,” they envision a kindly person with warm, sweet feelings who never confronts or opposes. This is very misleading.

Yet, even His own children are on the receiving end of His loving correction and rebukes. This is made clear by Hebrews 12:56, which reads, My son, do not make light of the Lord's discipline, and do not lose heart when He rebukes you. Why? The writer goes on to say, Because the Lord disciplines the one He loves.

Yes! This too is love!

Dr. Eddie Hyatt is a Bible teacher and revivalist who is on a mission to reconnect America with her severed Christian roots. His books on this topic and other themes are available from Amazon and his website at http://eddiehyatt.com.