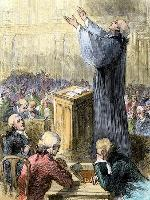 On September 5, 1774, George Washington, Patrick Henry, John Adams, Samuel Adams, and 52 other delegates from all 13 American colonies, except Georgia, gathered for a very solemn meeting at Carpenter's Hall in Philadelphia, PA. They met to discuss how to respond to the tyranny of King George who was continuing to impose oppressive taxes and regulations on the colonists without any input from them. With protests erupting, especially in New England, they now faced a new and more serious threat.

Deciding to put down the protests with force, George had sent 6 regiments of British soldiers who had locked down the city of Boston and closed its port. Concern had spread throughout the colonies and in Virginia Thomas Jefferson called for a day of fasting and prayer in which he asked for all the people to, "Invoke the Divine interposition to give the American people one heart and one mind to oppose all transgressions against American rights" (Hyatt, 1726: The Year that Defined America, 107).

To one degree or another. the delegates had all been impacted by the Great Awakening. It is, therefore, not surprising that they decided to open their deliberations with prayer. Samuel Adams, a Puritan from New England, suggested they invite Rev. Jacob Duche, an Anglican minister of Philadelphia who was known as a man of deep piety and faith, to come and lead them in payer.

As the elderly, grey-haired Duche stood before the Congress, he began by reading the entire 35th Psalm, which powerfully impacted everyone present. It is a prayer of David for deliverance and begins with the words, Plead my cause O LORD with those who strive against me; fight against those who fight against me. The Psalm ends with praise for God’s deliverance.

After reading the Psalm, Duche began praying for the delegates and for the oppressed American states. His prayer was not politically correct for he prayed according Scripture and in the name of Jesus Christ, something many current public officials refuse to allow.

But although their outward manners differed, there was a singleness of heart and purpose as they all united in prayer for God’s assistance and intervention for America. Duche lifted his voice in prayer, saying,

O Lord, our high and mighty Father, heavenly king of kings, and Lord of Lords, who dost from Thy throne behold all the dwellers of the earth, and reignest with power supreme over all kingdoms, empires, and governments. Look down in mercy we beseech thee on these our American states who have fled to Thee from the rod of the oppressor and thrown themselves on Thy gracious protection, desiring to be henceforth dependent only on Thee. To Thee they have appealed for the righteousness of their cause; to Thee do they now look up for that countenance and support which Thou alone can give . . . Shower down upon them and the millions they represent, such temporal blessings as Thou seest expedient for them in this world and crown them with everlasting joy in the world to come. All this we ask in the name and through the merits of Jesus Christ Thy Son and our Savior. Amen (Hyatt, 1726: The Year that Defined America, 108).

This was America's founding prayer and it was recorded in the official proceedings of this First Continental Congress. John Adams wrote to his wife, Abigail, of the impact of the Bible reading and prayer on the delegates, saying,

Who can realize the emotions with which they turned imploringly to heaven for divine interposition and aid. It was enough to melt a heart of stone. I never saw a greater effect upon an audience. It seems as if heaven had ordained that Psalm to be read that day. I saw tears gush into the eyes of the old, grave pacific Quakers of Philadelphia. I must beg you to read that Psalm (Hyatt, 1726: The Year that Defined America, 108).

Rev. Duche was then invited to be the chaplain for the Congress and begin each session with Bible reading and prayer. He agreed and this first Congress became a place where God's word and prayer in the name of Jesus were valued and given priority.

Sadly, these historical facts have been censored from the secularized modern versions of America’s history. It is, therefore, vital that we restore them to the American public mind for as Carl Sandburg said, "When a nation goes down or a society perishes, one condition may always be found; they forgot where they came from, they lost sight of what had brought them along."

This is a reminder of where we have come from and what has brought us along.

This article is derived from Dr. Eddie Hyatt's book, 1726: The Year that Defined America, available from Amazon and his website at http://eddiehyatt.com. 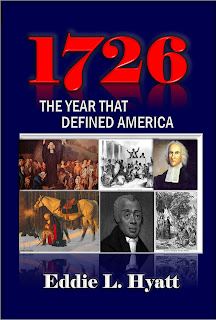