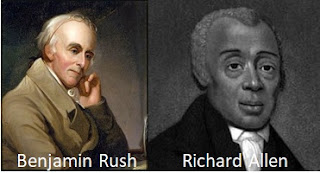 One of America’s Founding Fathers, Dr. Benjamin Rush, helped launch one of the most successful black denominations in America today. Rush (1745-1813) was a Philadelphia physician, member of the Continental Congress, signer of the Declaration of Independence, and served as Surgeon General during the Revolutionary War at George Washington’s request.

Rush was a passionate abolitionist who helped form the first Abolition society in America in his hometown of Philadelphia. He called slavery a “hydra sin” and called on the pastors and minsters of America to take a public stand against it. He wrote,

But chiefly—ye ministers of the gospel, whose dominion over the principles and actions of men is so universally acknowledged and felt, - Ye who estimate the worth of your fellow creatures by their immortality, and therefore must look upon all mankind as equal; - let your zeal keep pace with your opportunities to put a stop to slavery. While you enforce the duties of “tithe and cumin,” neglect not the weightier laws of justice and humanity. Slavery is a Hydra sin and includes in it every violation of the precepts of the Law and the Gospels (Hyatt, Abolitionist Founding Fathers, 37-38).

Rush was very influential in turning many against slavery including other Founding Fathers. As Dr. Thomas Sowell wrote,

Among those who turned against slavery in the 18th century were George Washington, Thomas Jefferson, Patrick Henry, and other American leaders. You could research all of 18th century Africa or Asia or the Middle East without finding any comparable rejection of slavery there (Hyatt, Abolitionist Founding Fathers, 9).

Rush became friends with the former slave and Methodist evangelist Richard Allen (1760-1831) who settled in Philadelphia after a time of successful evangelistic ministry to both black and white audiences. In fact, his ministry was so successful in bridging racial and cultural divides that that Paul Strand, former Washington D.C. correspondent for CBN, called Allen “America’s Black Founding Father.”

Rush, a Presbyterian, came to their aid with both moral and financial support. He assisted them in obtaining property and erecting their own building in which to worship. They established Bethel Methodist Church out which came the African Methodist Episcopal (AME) denomination. Allen later wrote,

We had waited on Dr. Rush and Mr. Robert Ralston, and told them of our distressing situation. We considered it a blessing that the Lord had put it into our hearts to wait upon those gentlemen. They pitied our situation, and subscribed largely towards the church, and were very friendly towards us and advised us how to go on . . . Dr. Rush did much for us in public by his influence. I hope the name of Dr. Benjamin Rush and Mr. Robert Ralston will never be forgotten among us. They were the two first gentlemen who espoused the cause of the oppressed and aided us in building the house of the Lord for the poor Africans to worship in. Here was the beginning and rise of the first African church in America (Hyatt, Abolitionist Founding Fathers, 27).

Think about it! One of America’s Founding Fathers helped launch of one of the largest and most respected black denominations in America today. The current "reframing" of America's founders as evil, racist slaveholders is a brazen distortion of history driven by a polticial/socialist agenda.

This article is derived from Dr. Eddie Hyatt’s latest book, Abolitionist Founding Fathers, available from Amazon and is website at www.eddiehyatt.com.