THE CHRISTIAN AWAKENING THAT ENDED SLAVERY IN AMERICA

#Remembering1726
Historians have noted that slavery, although practiced for thousands of years by many peoples and civilizations, suddenly became anathema in 18th century America. The late historians Elizabeth Fox-Genovese and Eugene Genovese observed, “Perception of slavery as morally unacceptable — as sinful — did not become widespread until the second half of the eighteenth century.”
Dr. Walter Williams, Professor of Economics at George Mason University, has said that the unique characteristic of slavery in America was not only the brevity of its existence, but also the “moral outrage” against it. The brilliant scholar, Dr. Thomas Sowell, who happens to be black, has written,
Slavery was just not an issue, not even among intellectuals, much less among political leaders, until the 18th century–and then it was an issue only in Western civilization. Among those who turned against slavery in the 18th century were George Washington, Thomas Jefferson, Patrick Henry and other American leaders. You could research all of 18th century Africa or Asia or the Middle East without finding any comparable rejection of slavery there (Hyatt, 1726: The Year that Defined America, 90).
The Source of the Moral Outrage Against Slavery
There was a reason for this sudden moral opposition to slavery and that reason is to be found in what became known as The Great Awakening. In this Christian revival that ebbed and flowed from 1726 to 1770, it seemed that entire towns repented and turned to God. In his Autobiography, Benjamin Franklin described the amazing transformation of his hometown of Philadelphia in 1739. He wrote,
It was wonderful to see the change soon made in the manners of our inhabitants. From being thoughtless or indifferent about religion, it seemed as if all the world were growing religious so that one could not walk through the town in an evening without hearing psalms sung in different families of every street Hyatt, 1726: The Year that Defined America, 79).
Out of this revival there emerged a deep concern for the those who did not know Christ. As a result, many evangelists began taking the message of salvation to the marginalized of society, including blacks, both slave and free. Their ministries breached racial and cultural barriers and they saw many come to Christ. Black preachers and churches emerged out of this Awakening, as well as the moral outrage against slavery, which the historians above have noted.
From Evangelism to Social Transformation
At the beginning of the Great Awakening in 1726, outreach to the black populace was evangelistic in nature and not characterized by opposition to slavery. Those early preachers, such as George Whitefield, Gilbert Tennant, and Jonathan Edwards, saw their primary purpose to be in getting people ready for the next world, not necessarily improving their lot in this one. In their thinking, a slave on his way to heaven was far better off than a king on his way to hell. 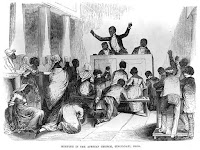 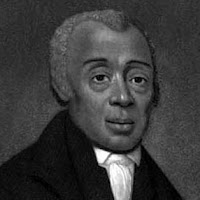 Allen became close friends with Benjamin Rush, a Philadelphia physician and signer of the Declaration of Independence. As the Awakening waned, the Methodist Church in Philadelphia, of which Allen was a member, decided to segregate the congregation according to race. Allen and other blacks walked out. Rush came to their aid and assisted them in establishing their own congregation. They established Bethel Methodist Church out which came the African Methodist Episcopal (AME) denomination. Allen later wrote,
Dr. Rush did much for us in public by his influence. I hope the name of Dr. Benjamin Rush and Mr. Robert Ralston will never be forgotten among us. They were the two first gentlemen who espoused the cause of the oppressed and aided us in building the house of the Lord for the poor Africans to worship in. Here was the beginning and rise of the first African church in America (Hyatt, 1726: The Year that Defined America, 156).
Paul Strand, senior Washington D.C. correspondent for the Christian Broadcasting Network, has called Allen, “America’s Black Founding Father.”
America’s Founders Are Impacted
The spiritual power of the Awakening and the moral arguments it produced against slavery were overwhelming. The pragmatic fruit emerging from the revival include the following:
1)    George Washington accepted free blacks into the Revolutionary Army resulting in one out of every eight soldiers being of African descent. Blacks and whites fought together for freedom from Great Britain.
2)       America’s founders purposely avoided using classifications of race or skin color in the nation’s founding documents. America’s founding documents are colorblind, even if her history has not been. This is why Dr. King, in his “I Have a Dream,” speech could say,
“When the architects of our republic wrote the magnificent words of the Constitution and the Declaration of Independence, they were signing a promissory note to which every American was to fall heir. This note was a promise that all men, yes, black men as well as white men, would be guaranteed the "unalienable Rights" of "Life, Liberty and the pursuit of Happiness."
3)     Founders from the North, who had never owned slaves, took new and strong public stands against the institution. John Adams, for example, declared,
“Every measure of prudence . . . ought to be assumed for the eventual total extirpation of slavery from the United States. I have throughout my whole life held the practice of slavery in abhorrence” (Hyatt, 1726: The Year that Defined America, 101).
4)     Confronted by the inconsistency of Christian faith with owning slaves, George Washington set in motion a compassionate program to completely disentangle Mount Vernon from slavery. Concerning abolition, he wrote,
“Not only do I pray for it on the score of human dignity, but I clearly foresee that nothing but the rooting out of slavery can perpetuate the existence of our union by consolidating it in a common bond of principle’ (Hyatt, 1726: The Year that Defined America, 103).
5)      As a result of the Awakening, an abolition movement arose and one of America’s Founding Fathers, Benjamin Rush, helped found the nation’s first abolition society in Philadelphia. Rush, a Philadelphia physician and signer of the Declaration of Independence, also exhorted the ministers of America to attack slavery, saying,
“While you enforce the duties of ‘tithe and cumin,’ neglect not the weightier laws of justice and humanity. Slavery is a Hydra sin and includes in it every violation of the precepts of the Laws and the Gospels (Hyatt, 1726: The Year that Defined America, 100-101).
5)       Even those founders who did not free their slaves, publicly admitted that it was wrong and sinful and would bring God’s judgement on the nation. It was in the context of slavery being allowed to continue in the South that Thomas Jefferson wrote,
“God who gave us life, gave us liberty. And can the liberties of a nation be thought secure when we have removed their only firm basis, a conviction in the minds of the people that these liberties are a gift from God? That they are not to be violated but with His wrath? Indeed, I tremble for my country when I reflect that God is just and that His justice cannot sleep forever” (Hyatt, 1726: The Year that Defined America, 125).
Although it would take a Second Great Awakening (ca. 1800- ca. 1830), a Great Prayer Awakening (1857-58), and a Civil War (1861-1865) to bring final closure, slavery’s end was sealed in that First Great Awakening that swept Colonial America. It was the Christian Awakening that ended slavery in America.
America is in desperate need of another Christian Awakening. We ought, therefore, to heed the words of Samuel Adams (1722–1803), a passionate abolitionist, signer of the Declaration of Independence, and known as The Father of the American Revolution. While serving as governor of Massachusetts, he proclaimed April 2, 1795 to be a Day of Fasting and Prayer for both Massachusetts and America.
The words of that Proclamation reveal the profound depth of faith in America’s founding generation and shows how they saw their civil liberty tied to their faith in God. It reads in part:
Calling upon the Ministers of the Gospel, of every Denomination, with their respective Congregations, to assemble on that Day, and devoutly implore the Divine forgiveness of our Sins, To pray that the Light of the Gospel, and the rights of Conscience, may be continued to the people of United America; and that his Holy Word may be improved by them, so that the name of God may be exalted, and their own Liberty and Happiness secured (Hyatt, 1726: The Year that Defined America, 104).