WHY THIS ELECTION SHOULD BE AN EASY CHOICE FOR EVANGELICAL CHRISTIANS 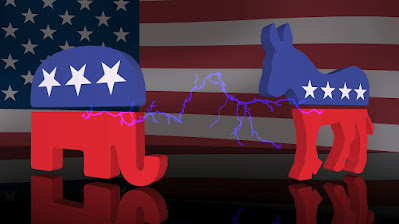 My purpose in life--my reason for being--is to proclaim the Good News of Jesus Christ and see His church strengthened and built up in America and around the world. I have no vested interest in any candidate or political party but will vote for the one whose policies are most friendly to the cause of Christ and my own reason for being.

The Democrat Party--the party of my parents and grandparents--has made this an easy choice. To cite just one example; last year, the Democrat National Committee (DNC) unanimously passed a resolution affirming atheism and declaring that neither Christianity nor any religion is necessary for morality or patriotism.

By this act, they rejected God, the Bible, and any transcendent guide for truth and morality. They swallowed the lie of the serpent to our first parents that if they would ignore God's command and go their own way, "You will be like God, knowing [determining] good and evil" (Gen. 3:5).

This move was not only slap in the face of God, but also a rejection of America’s founding generation. To cite just one example; in his First Inaugural Address, George Washington declared,

The propitious smiles of Heaven can never be expected on a nation that disregards the external rules of order and right, which Heaven itself has ordained (Hyatt, Pilgrims and Patriots, 174).

Donald Trump, despite his tweets and personal flaws, has supported individual and religious liberty. He has acknowledged God and Christ and promoted policies that are friendly to the Christian cause. He has obviously moved in the direction of Christian, conservative values

But while Trump has been moving toward God, the Democrat party has been runnning from Him. This has made Nov. 3 an easy choice for me. If you would like to read more about my thoughts on this election and Donald Trump, check out my 31-page book, 5 Reasons I Changed My Mind About Donald Trump.

Dr. Eddie Hyatt is also the author of 1726: The Year that Defined America, which documents how it was the Great Awakening (1726-70) that gave birth to this nation and unleashed the spiritual and moral forces that ended slavery. His books are available from Amazon and his website at www.eddiehyatt.com.