WHY I BELIEVE ANOTHER "GREAT AWAKENING" IS COMING TO AMERICA 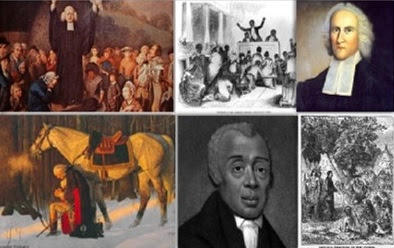 In Psalm 27:13, David wrote, I would have lost heart, unless I had believed to see

the goodness of the LORD in the land of the living. I too would would have lost heart except that, beginning eleven years ago, a series of providential encounters began that have restored my hope and reassured me that God is not through with America.

Eleven years ago, I had given up hope of America ever seeing another great, national spiritual awakening. I thought God was through with America and I had decided to focus my attention on other areas of ministry. Then everything changed when I had a life-altering encounter with the Almighty.

I had seen and experienced “revival” from the time I was a child. I recall my parents taking me and my brothers to the great tent revivals of the healing evangelists in the 1950s. I was baptized in the Holy Spirit and called to preach the Gospel during the great Charismatic Renewal of the 1970s. I participated in the Word of Faith revival of the 1980s and the revivals of Toronto and Pensacola in the 1990s.

These were all legitimate works of the Holy Spirit. However, I observed so much man-made hype and fake manifestations as to cause me to lose heart that America would see another genuine Great Awakening that would revive the churches of America, impact the culture, and stem the tide of secularism and false religion that was flooding the land.

Then one Saturday in the summer of 2010 I got in my car to make a 2-hour drive from Tulsa to the Oklahoma City area where I was to speak in the Sunday morning service at an area church. As I pulled onto the highway, and with no expectation of any such thing happening, I suddenly felt that I was enveloped in God’s presence.

At the same time, my mind began to be flooded with thoughts of hope and faith that America “could” see another great, national spiritual awakening. So intense was the experience that I was hardly aware of my surroundings as I drove. I could hardly wait to check into my hotel and began writing down the thoughts that were flooding my mind and heart.

I arrived at my hotel and quickly checked in. Then for another five hours I sat on the bed with my notebook pc on my lap as God’s presence continued to flood my heart and mind. I praised God and wrote until the presence of God lifted and I fell off to sleep.

There were two major truths that were indelibly inscribed on my heart and mind from that encounter. First of all, my hope was restored that America “could” see another great, national spiritual awakening that would alter the course of the nation. I clearly saw that God was not through with America.

Out of that experience I wrote the book, America’s Revival Heritage, which we published in 2012. However, even as we marketed this book, I was being providentially led to more resources that confirmed the fact that America was birthed out of the First Great Awakening and that God had a Divine plan for this land.

After the first printing sold out, I made plans to publish an updated second edition. However, so much new material had come into my hands that, as I wrote, I realized it was an entirely new book. In 2014, we published Pilgrims and Patriots with the subtitle The Radical Christian Roots of American Democracy and Freedom.

During the summer of 2019, I began experiencing a deep stirring to take the research I had already done and add a chapter on slavery. I knew that in this new book I was to show that the Great Awakening had a direct bearing, not only on the founding of America, but also on the ending of slavery on this continent.

As I began this new project, I was amazed at the resources that providentually came into my hands. These were resources that were exactly what I needed to make the case about the Great Awakening and the ending of slavery.

While working on this new project, I read about the NY Times’ 1619 Project in which they were “reframing” America's history and claiming that 1619, when the first African slaves were brought to these shores, was America’s true founding, not 1776. They presented America as being defined by 1619 and therefore racist and corrupt at her core and in need of fundamental change.

Although I originally thought that this new book would be a second edition of America’s Revival Heritage, there was so much new material about the Great Awakening and the anti-slavery movement it ignited, that I realized it was an entirely new book. So, in December of 2019 we published 1726 with the subtitle The Year that Defined America.

This past summer (2021) I sensed a deep desire to take the chapter on the Great Awakening and slavery in 1726 and expand it into a small book that documents how America’s founders turned against slavery at a time it was accepted and practiced in most of the world. It seemed appropriate in light of the vicious attacks on America’s founders and so Abolitionist Founding Fathers was published in June of this year.

Out of these experiences, I have established the “1726 Project.” This is not an organization, but an idea and movment to educate America about her overt Christian roots in spiritual awakening. This historical knowledge, along with Biblical promises such as II Chronicles 7:14, becomes a solid foundation for praying for another Great Awakening to roll like a great tsunami wave across this land.

I have hope this will happen for God has assured me that He is not through with America.

Dr. Eddie Hyatt is a revivalist, historian, and ordained minister with 50 years of service as a pastor, teacher, and professor of theology. His books are availabe from Amazon and his website at www.eddiehyatt.com. To schedule him to speak at your church or event, send an email to dreddiehyatt@gmail.com.