Despite the societal turmoil and a pandemic that continues to plague the nation, I believe that America can see God’s salvation this fall. This confidence was birthed in my heart as I studied and taught on the words of Moses to the people of Israel as they faced the impassable Red Sea and saw Pharaoh’s army rushing toward then from the rear.
The people reacted in fear and anger. They were fearful of being slaughtered or captured by the Egyptians and they were angry at Moses and blamed him for getting them in that distressing situation. They castigated Moses, saying, Because there were no graves in Egypt, have you taken us away to die in the wilderness . . . it would have been better for us to serve the Egyptians than that we should die in the wilderness (Ex. 14:11-12). 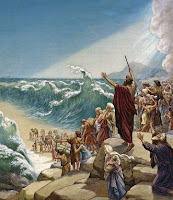 Moses did not react to their fear and anger. He was living and functioning from an inner core conviction and faith that transcended anything that might be happening on the outside. We too must learn to live from the inside out. Moses said to the people, Do not be afraid. Stand still and see the salvation of the LORD which He will accomplish for you today. (Ex. 14:13).
The Hebrew word for “stand” in this verse is yatsab and it means “to stay” or “to remain firm.” The Hebrew word for “still” is nasah and it literally means “to start on a journey” or “to go forward.” Moses literally tells the people to “REMAIN FIRM IN GOING FORWARD.”
Moses assures them that if they will remain firm in their original commitment to leave Egypt and follow the LORD, then they will see the salvation of the LORD that very day. “Salvation” is translated from the Hebrew word yeshuwah, from which comes the name of our Messiah—Yeshua (Jesus).  It carries the meaning of “deliverance,” “victory,” “prosperity,” and “well-being.”
In other words, if they will get past their fear and anger, and move forward in faith, they will see God intervene on their behalf. They will see His salvation—His yeshuwah.
Like Israel at that time, there is much today to distract us, anger us, and make us afraid. Nonetheless, I am convinced that we can see His salvation on our behalf if we will remain firm in going forward in our Christian commitment to be His witnesses in the earth and letting our light shine.
Darkness is the absence of light and there is darkness in the land because Christians have hidden their light, putting it under a basket or shade, as Jesus warned in Matthew 5:15.

This is tragic for only Christians have a message that can change hearts and lives. Cause-driven movments, such as #MeToo and Black Lives Matter, may stir passions, but they can never change lives. Only the Gospel can change hearts and cause people to love their neighbor and treat one another with justice and mercy.

That Christians are not letting their light shine was was highlighted to me recently when I walked into the office of the mayor of a North Texas city, handed him a copy of my book, and explained that it documents the role of prayer and faith in our nation’s founding.
He thanked me for the book and then asked a question that stunned me. He asked, “What has happened to the Christians in America?” I was silent and he posed another question, “Do you think the Christians will rise up again?” I replied, “Yes, they are coming out of the closet.” He replied, “I sure hope so.”
I realized that this mayor, and many like him, are feeling the pressure from the loud voices of left-wing activists who want to undermine the Christian values on which this nation was founded. They wonder, “Where are the Christians? Why aren’t we hearing their voices?”
It is thus time for Chritians everywhere to shake off the fear and boldly go forward in our call to be His witnesses in the power of the Holy Spirit (Acts 1:8). We don't need a new Christian  program or better entertainment. We don't need to organize a protest against this or that group or cause. Instead of cursing the darkness, we must let our light shine. The light will dispel the darkness.
We must let our light shine on the internet, at Walmart, at school board meetings, city council meetings, etc. If we will firmly go forward in our Christian faith, not hedging or compromising in any way, God will intervene on our behalf. He will roll back our Red Sea and deal with our  enemies. He will intervene and we will see His salvation!

Dr. Eddie Hyatt is the author of 1726: The Year that Defined America and the founder of the "1726 Project," which is dedicated to making known America's birth out of a great spiritual awakening, and calling on Christians to pray for another such awakening. His books are available from Amazon and his website at www.eddiehyatt.com.
Posted by Eddie Hyatt at 1:04 PM