ARE WE SEEING A NEW "GIVE ME LIBERTY OF GIVE ME DEATH" MOVEMENT? 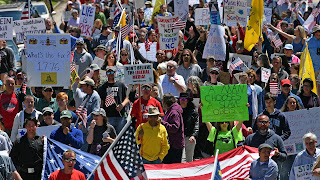 When I read the story of the 77-year-old barber, Karl Manke, and his defiance of the lockdown orders of Michigan Governor Gretchen Whitmer, I was reminded of Patrick Henry’s defiant speech before the Second Virginia Convention on March 23, 1775.
Henry gave his speech in response to a debate that raged over whether the colonists should surrender their liberties to the invading British who promised them protection and safety. Vehemently opposed to sacrificing freedom for safety, Henry, with eyes blazing, passionately declared, “Give me liberty or give me death!”
I am not saying that that Manke is Patrick Henry, but there are parallels between the two--between now and then--and it ultimately boils down to the question, “How much do we value our civil liberties?” Will we surrender our God-given rights of life, liberty, and the pursuit of happiness to Big Government in return for promises of protection and safety?
Karl Manke Chooses Liberty
If you haven’t read his story, 77-year-old barber, Karl Manke, defied Michigan Governor Gretchen Whitmer’s lockdown orders and reopened his barber shop after being turned down for unemployment compensation. He had to make a living!
The governor, of course, insists that she is looking after the safety of her citizens (or subjects?). Manke, however, was desperate to get back to work and was willing to take the risk involved. He told radio host, Steve Gruber, “I just couldn’t live with myself if I didn’t do that.”
Manke took every precaution with his customers, sanitizing his hands and equipment and wearing a mask. That was not good enough for the governor who sent the state police with an order for him to close. Manke replied, “I will only leave if they drag me out in the street or Jesus comes.”
After then receiving several tickets from local police, who turned his case over to the prosecuting attorney, Manke replied,
I’m 77. What are they going to give me? Life? I’ve got one foot in the grave and the other on a banana peel. I could care less.”
Manke, of course, is not alone. Others, desperate to feed their families, have opened their shops in defiance of the lockdown. In fact, a movement of protest has emerged across the land against what many consider to be tyrannical measures by government officials that rob them of their God-given, consitutional rights of individual and religious liberty.
The British Lockdown of New England 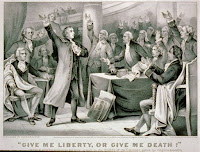 It was 1775 and the British had locked down the city of Boston and closed its seaport. The lockdown was imposed because Bostonians had publicly protested the unfair taxes and tariffs on their goods without any say on their part. Everyone knew that the same thing would happen in Virginia and Pennsylvania unless they acquiesced to the demands of King George.
King George saw the colonists, not as citizens, but as subjects, and he sent six regiments of British troops to Boston to put down their rebellion. He also revoked the right of the people of Massachusetts to choose their own governing officials, something they had known since the time of the Pilgrims. He then began appointing governors and other officials who would carry out his wishes with the colonists.
The Debate Between Safety and Freedom
Throughout the colonies a great debate arose as to how they should respond to this British take-over. Should they resist? Should they fight this attempt to rob them of the freedoms they had known since the days of the Pilgrims—freedoms that had been purchased and implemented at great price by their parents and grandparents?
Some argued that there could be advantages to sacrificing a few freedoms and living under British control. Living under British rule meant they would not have to worry about marauding pirates who might pass by their shores. The British would also defend them against any future invasions by the French or Spanish and would provide help against attacks from hostile Indian tribes.
Patrick Henry Chooses Freedom
For many, it seemed like a good trade-off. Sacrifice personal freedom for safety. Patrick Henry, however, saw it differently and his impassioned speech changed many hearts and brought the majority over to the side of choosing liberty.
In his speech, Henry laid out the case for not caving to the demands of King George. So moving was his speech that Edward Carrington, who was listening outside a window of the church, requested that he be buried on the spot. Thirty-five years later, in 1810, he got his wish. Henry ended his speech with these resounding words,
Is life so dear, or peace so sweet, as to be purchased at the price of chains and slavery? Forbid it, Almighty God! I know not what course others may take; but as for me, give me liberty or give me death!
Watch and Pray
A common saying in early America was, “The price of liberty is eternal vigilance.” We must be especially prayerful and vigilant at this time and not allow our civil liberties to be subtly stolen away in the name of government protection and safety.
Yes, we should cooperate with government officials in their attempts to control the coronavirus, but not at the cost of individual and religious liberty. Government officials must remember that they are not monarchs and we are not their subjects. We are citizens of a free Republic and they are elected officials who serve at the pleasure of the people.
We must, as Jesus said in Matthew 26:41, "Watch [be vigilant] and pray." Pray for public officials to have the wisdom of God in dealing with this pandemic. Be vigilant knowing that power-hungry politicians are using this pandemic, and the fear it produces, to gain more conrol over our lives with promises of government provision, protection, and safety.
Pray and Choose Liberty
Last, but not least, let us pray for another Great Awakening to sweep across the land. This would do more than anything to preserve our God-given liberties and rid the land of this virus and the more deadly virus of a carnal, casual Christianity.
Yes, personal freedom involves personal responsibility and personal risk. I, for one, am willing to take the risk. I say with Patrick Henry, Karl Menke, and millions of others,  “Give me liberty or give me death.”
Dr. Eddie Hyat is the author of 1726: The Year that Defined America, a timely and strategic book that documents how the Great Awakening played a primary role in the founding of America and the ending of slavery on this continent. This book, and others he has written, are available from Amazon and his website at www.eddiehyatt.com.