FINDING GOD IN THE MIDST OF OUR CHAOS

Even when life seems out of control, God is powerfully at work advancing His kingdom and cause. This is powerfully illustrated in Paul’s second missionary journey; a journey that began in strife, continued in uncertainty, and encountered violent opposition. Yet, in hindsight, it is clear that this second missionary journey was the most significant of Paul’s three missionary journeys (four if we include his journey to Rome as a prisoner).
Begins in Strife
It was not the way you want to begin a missionary outreach. Strife erupted over whether Mark should go with them on this second missionary journey (Acts 15:36-41). Paul was adamant that he should not go because he had abandoned them during their first missionary journey and returned to Jerusalem (Acts 13:13).
Barnabas was just as adamant that Mark should accompany them on this new mission. Neither would yield. Luke says that the contention between Paul and Barnabas, became so sharp that they parted from one another (Acts 15:39). How sad! Two friends who had labored together and seen God work so powerfully, now go their separate ways.
Barnabas took Mark and departed on their own missionary journey to Cyprus. Paul found a new ministry partner in Silas and they departed on their missionary outreach. Can God bless such strife and dissension?
Continues in Uncertainty
Although Paul’s idea was to visit all the places he had preached on his first missionary journey, it is obvious that he grappled with where to go first. Acts 15:6 says they were forbidden by the Holy Spirit to preach the word in Asia, which would have been the Roman province of Asia.
Put yourself in Silas’s shoes. He knows that he is with Paul because of his falling out with Barnabas and his insistence that Mark could not accompany him on this outreach. They get up one morning planning to go into Asia (present day Turkey) and Paul says, “No, God says we are not to go to Asia.”
Paul is not sure where to go from there, but heads for Bithynia. However, en route to Bithynia he changes directions again. In Luke’s words, the Spirit did not permit them (Acts 157). Paul then decides to go to Troas.
How is Silas dealing with the uncertainty? How well do you handle a companion’s uncertainty? This missionary journey that began in strife is continuing in uncertainty. But it gets even worse.
Encounters Violent Opposition
Timothy joined up with Paul and Silas in Lystra. They journey on to Troas where Luke joins the team.
In Troas Paul has the vision of the man of Macedonia saying, Come over to Macedonia and help us (Acts 16:9). Paul shares the vision and Luke says they began making plans to go to Macedonian, concluding that God had called us to preach the gospel to them (Acts 16:10).
They journey to Macedonia and stop in Philippi the first major city in that province. There is no synagogue, but they find a group of women who meet regularly for prayer at the nearby river. The Lord opens their hearts and one of them, Lydia, who is a successful businesswoman, invites Paul and his team to stay at her home.
They continue going to the place of prayer by the river and encounter a young woman with a demonic fortune-telling spirit. She follows Paul and his group proclaiming, These men are servants of the Most His God, who proclaim to us the way of salvation (Acts 16:17).
Recognizing that it is a demonic spirit moving the young woman, Paul casts the spirit out of her. From that point, she is no longer able to tell fortunes, and this creates big problems for Paul.
The young woman is a slave and her masters rake in a lot of money through her fortune-telling abilities. When they realize their avenue of money is gone, they forcibly apprehend Paul and Silas and drag them through the streets to the city magistrates. They proceed to accuse Paul and Silas of being trouble-making foreigners.
The magistrates tore off their clothes and commanded them to be beaten with rods. They were beaten until the blood ran down their backs, which also turned black and blue with bruises from the beating. After the beating, they were taken to jail and put in the inner dungeon and their feet fastened in stocks.
The missionary journey that began in strife and continued in uncertainty, has now encountered violent opposition.
Reflections on the Above
If you were Silas, what would be going through your mind at this time? Would you be questioning Paul’s ability to hear the Lord? Would you want to say, “Paul, tell me again about that vision you claim to have had about us coming to this place.” You might be tempted to say, “I now understand why Mark left in the middle of your first missionary journey, and if I ever get out of this jail, I am leaving too.”
There could have been questions about the whole legitimacy of this missionary journey. Silas could have said, “Paul, your strife with Barnabas and Mark is the cause of this situation. You have opened the door to the devil. You are going to have to go back and make things right with them.”
God Was Powerfully at Work in the Midst of Their Chaos 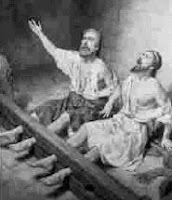 Paul and Silas, however, believed in the Sovereign work of Almighty God. They believed that even in the midst of their chaos God was powerfully at work advancing His kingdom and cause. That is why, at midnight, the darkest part of the night, with blood caked on their bruised and beaten backs, they were praying and singing praises to God (Acts 16:25).
At this point, there was a great earthquake and every prison door was opened and everyone’s chains were loosed. The old black preacher was preaching from this passage and quoted Isaiah 66:1-2 where God said, Heaven is My throne, and the earth is My footstool.
He pictured the singing of Paul and Silas getting God’s attention. He said as God leaned forward listening to them sing, He began to pat His foot and that is when the earth and the old jail began to shake.
Even though the doors were open and everyone’s bands loosed, not a single prisoner fled. The jailer was so overwhelmed that he fell down before Paul, asking, What must I do to be saved? The prisoners, the jailer and his family, Lydia, and the other women became the nucleus for the church in Philippi, which was first church in Europe.
The Historic Significance of this Second Missionary
This was the first time the gospel was peached in Europe. It was the beginning of the church in Europe. This was significant for Europe would become the bastion of Christianity throughout the Middle Ages. It was out Europe that missionaries carried the gospel to many parts of the world, including North and South America.
It was devout Christians from Europe who founded the United States of America from whence the gospel has been taken to the ends of the earth. Even the U.S. Supreme Court acknowledged this missionary role of the United States of America.
In the 1892 ruling, Church of the Holy Trinity vs The United States, the nation’s highest court declared America to be a “Christian nation.” Among the evidence listed for this conclusion, the court mentioned,
The gigantic missionary associations, with general support, and aiming to establish Christian missions in every quarter of the globe” (Hyatt, 1726: The Year that Defined America, 170-71).
This can all be traced back to Paul's second missionary journey--a journey that began in strife, continued in uncertainty, and ran into violent opposition.
It is Now So Clear
With the advantage of 2000 years of hindsight, it is obvious that Paul’s second missionary journey was by far the most significant of all his journeys. At the time, life seemed chaotic, but now it is obvious that God was powerfully at work advancing His kingdom and cause during it all.
God worked His will and way through Paul because Paul was committed to God’s will and way. Paul was not chasing personal success. He was not trying to build a large ministry with a large mailing list and network of supporters. He was, instead, totally committed to making Christ known and calling people everywhere to submit their lives to Him.
I suspect that Paul refused to take Mark on that second missionary journey because he believed that Mark could be detriment to their godly mission. It was not something personal. It was an expression of His total commitment to God and the preaching of the gospel.
Paul did later reconcile with both Barnabas and Mark. Many years later, in his final letter written from a Roman prison cell, Paul admonished Timothy, Get Mark and bring him with you, for he is useful to me for ministry (II Timothy 4:11).
You Can End Well
All is well that ends well. And like Paul on his second missionary journey, and Joseph being sold into slavery by his brothers, if we keep our eyes on Jesus during the chaos and trust completely in Him, it will end well. Roman 8:28 will be fulfilled, which reads,
And we know that all things work together for good to those who love (agape) God, to those who are called according to His purpose.


Dr. Eddie Hyatt is a historan and Bible teacher with a vision for another Great Awakening in America and throughout the earth. His latest book, 1726: The Year that Defined America, documents how the Great Awakening had a direct bearing on the founding of America and the end of slavery on this continent. His books are available from Amazon and his website at www.eddiehyatt.com.
Posted by Eddie Hyatt at 6:40 PM