WHAT JUDGE TAMMY KEMP DID WAS BOTH GODLY AND AMERICAN

TO THE "FREEDOM FROM RELIGION FOUNDATION "AND OTHER CRITICS: 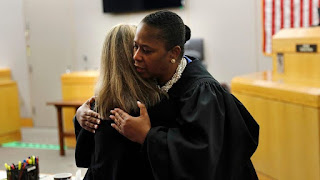 No! Judge Tammy Kemp did not violate the First Amendment by hugging Amber Guyger and giving her a Bible.
In case you have not heard the story; in a Dallas courtroom, Amber Guyger had just been found guilty of murder and given a ten-year sentence. The brother of the dead man asked to speak to Guyger, a former policewoman. He proceeded to speak forgiveness to her and encouraged her to receive Christ.
He then asked permission to hug Guyger and Judge Kemp gave the OK. The two came together in a very emotional embrace and sobs could be heard throughout the courtroom. Judge Kemp then came down from her seat and gave Guyger a Bible, hugged her, told her to read John 3:16, and prayed with her.
The Freedom from Religion Foundation did not like Judge Kemp’s actions, claiming it violated the separation of church and state. They, however, have chosen to be ignorant of the fact that the phrase “separation of church and state” does not exist in the U.S. Constitution. They are also willingly ignorant about the following facts concerning the Bible and America’s history.
Facts About the Bible and America’s History
1.     The First Continental Congress opened on September 5, 1774 with an extended time of Bible reading and prayer. Bible reading and prayer continued to be an important part of their proceedings.
2.      George Washington, America’s 1st president, said, “It is impossible to rightly govern the world without God and the Bible.” He set in motion a tradition by insisting on taking the presidential oath of office with his hand on a Bible (Hyatt, Pilgrims and Patriots, 137).
3.     The first English Bible printed in America in 1782 included a recommendation from Congress, saying “we recommend this edition of the Bible to the inhabitants of the United States and hereby authorize him [the publisher] to publish this recommendation in the manner he shall think proper.”
4.       In 1787 Benjamin Franklin called the Constitutional Convention to prayer and quoted from the Gospels and then the Psalms, saying, “We have been assured, sir, in the sacred writings, that except the Lord build the house they labor in vain that build it (Hyatt, Pilgrims and Patriots, 144).
5.       A ten-year study to discover where America’s founders got their ideas for the nation's founding documents, found that by far the single most cited authority in their writings was the Bible (Hyatt, Pilgrims and Patriots, 163).
6.       Andrew Jackson, America’s 7th president, said of the Bible, “That book, sir, is the rock on which our Republic rests.”
7.       Abraham Lincoln, America’s 16th president, said, “I believe the Bible is the best gift God has ever given to man. All the good from the Savior of the world is communicated to us through this Book.”
8.       Theodore Roosevelt, America’s 26th president, said of the Bible, “No other book of any kind ever written in English has ever so affected the whole life of a people.”
No Basis for Their Criticism
The claim by the FFRF that Judge Kemp violated the First Amendment is based on a shallow and biased interpretation. The First Amendment was put in place to ban Congress from ever creating an official, state church as had been the case in Europe since the time of Constantine. Nothing more! This was made clear, when the day after ratifying the First Amendment, those same founders proclaimed a national Day of Prayer and Thanksgiving.
Joseph Story, the highly acclaimed Supreme Court justice who served for 34 years from 1811-1845, said of the First Amendment, “We are not to attribute this prohibition to an indifference in religion, and especially to Christianity, which none could hold in more reverence than the framers of the Constitution” (Hyatt, Pilgrims and Patriots, 153).
The First Amendment gurantees freedom of religion, not freedom from religion, What Judge Kemp did was both godly and American. We should be applauding her and holding her up as an example for other public officials.


This article was derived from Dr. Eddie Hyatt's book, Pilgrims and Patriots, available from Amazon and his website at www.eddiehyatt.com. Dr. Hyatt is passionate about recovering America's true Christian heritage in spiritual awakening and seeing another natiional, spiriutal awakening in this generation. Inquires for speaking engagements can be sent to dreddiehyatt@gmail.com.
Posted by Eddie Hyatt at 4:56 PM