When a nation goes down, or a society perishes, one condition may always be found; they forgot where they came from. They lost sight of what had brought them along. 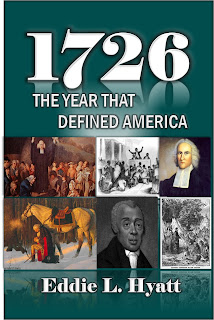 That statement captures my deepest desires concerning this, my latest book. America is sick spiritually, socially, morally, and politically; and a basic cause of this sickness is that we, as a nation, have forgotten where we came from.

In creating the official seal for the nation, America's Founders chose to inscribe the Latin words, Annuit Coepits, meaning, “He Smiled on Our Beginnings.” I have written this book to remind America of her godly beginnings and to highlight how far we, as a nation, have strayed from those beginnings.
The vision for this book unfolded quite suddenly and unexpectedly. This past summer I sensed a stirring in my heart to republish America’s Revival Heritage with a new chapter on how the Great Awakening impacted slavery and marked the beginning of its demise in America.
America’s Revival Heritage, you may recall, was the first book that emerged out of a 7-hour encounter with the Lord in 2010 in which my hope for America was renewed and I saw for the first time that the Great Awakening had a direct bearing on the founding of this nation.
In response to this new directive, I read through America’s Revival Heritage and made notes where edits should be made based on more recent research. I also began the new chapter on slavery and was deeply stirred by the research and writing I was doing on the topic.
In that first encounter with the Lord in 2010, I saw that there was a direct bearing of the First Great Awakening on the founding of the nation. Now, I was seeing that the Awakening also had a direct bearing on the ending of slavery in America. It was out of the Great Awakening that the spiritual and moral forces were unleashed that brought about slavery’s demise in this land.
As I worked on this new project with great excitement, I read that the New York Times had begun what it called the “1619 Project” in commemoration of the first African slaves being brought to Colonial America 400 years ago in 1619. Their stated mission was to argue that America was defined by 1619 rather than by 1776. They are insisting that America is racist and corrupt at its very core, and in need of fundamental change.
My response was, “No!” “America was not defined by 1619.” “America was defined by 1726.” 1726, of course, was the year the Great Awakening began. 1776 would never have happened apart from 1726. Slavery would never have been obliterated as it was apart from 1726.
As I continued researching and writing, I finally concluded that a new book was emerging. At that point, I realized that this was not the 2nd edition of America’s Revival Heritage, but a new book that I would call 1726.
I pray that God will use this book to awaken American citizens to their godly heritage. I pray that He will also use it to awaken the American church to its vital role in the nation's future by contending for another Great Awakening across the land.
Eddie Hyatt, Author
Look for the book on Amazon and at www.eddiehyatt.com after November 12.