THE CHRISTIAN HISTORY OF OUR THANKSGIVING HOLIDAY

America’s national “Thanksgiving” holiday is rooted in the nation’s radical Christian origins and the custom of its first immigrants to set aside special days for giving thanks to God for His goodness and blessings. This custom was carried on by succeeding generations and eventually found its way into the national consciousness and calendar.
The Pilgrims Maintain an Attitude of Gratitude 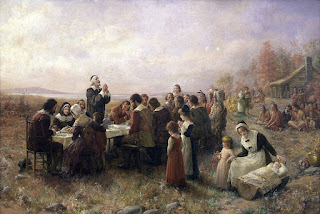 This article is derived from Dr. Eddie Hyatt's book, Pilgrims and Patriots, available from Amazon and his website at www.eddiehyatt.com. Dr. Hyatt is an author, historian and Bible teacher. His passion is to reconnect America's severed Christian roots and he does this by conducting "America Reawakening" events, which is a PowerPoint presentation that documents how America was birthed out of prayer and spiritual awakening. He can be reached at dreddiehyatt@gmail.com.