THE REVIVAL THAT TURNED AMERICA'S FOUNDERS AGAINST SLAVERY 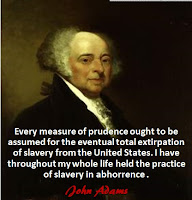 This article is derived from Dr. Eddie Hyatt's latest book, 1726, available from Amazon and his website at www.eddiehyatt.com. He is also the founder of the "1726 Project" whose goal is to spread the message of America's unique birth out of the First Great Awakening and call on believers everywhere to pray for another Great Awakening across the land.
Posted by Eddie Hyatt at 6:55 PM