“To destroy a people, you must first sever their roots.”
Alexander Solzhenitzsyn 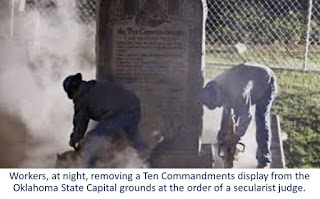 A spiritual battle is raging for the heart and soul of America. The impeachment battle raging in Washington D.C. is a mere symptom of this deeper, spiritual battle for the heart of the nation. A major battle strategy of the secularist Left is to redefine America by rewriting and reinterpreting her history and thereby making her vulnerable to radical change.
Peoples and nations derive their sense of identity from their history. Cut off a people from their past, and they can easily be molded into something very different. This is what Karl Marx was referring to when he said, “People without a heritage are easily persuaded.”
The Redefining of America
A glaring example of this crusade to rewrite America’s past is the New York Times’ “1619 Project.” Supposedly begun to commemorate the arrival of the first African slaves on American soil in 1619, their website reveals their real and sinister motivation. Their stated goal is to “reframe” American history by insisting that 1619, not 1776, represents the nation’s true founding. They assert, therefore, that America is racist and corrupt at its very core and in need of fundamental change.
Their thesis is flawed, however, because they have chosen to ignore what happened between 1619 and 1776. 1726, the year the Great Awakening began and transformed Colonial America, has been censured from their critique.
Alexander Solzhenitzsyn spent eight years in a Soviet labor camp and observed how the communists sought to cut off the Russian people from their Christian past. He wrote, “To destroy a people you must first sever their roots.” And commenting on the demise of nations in world history, Carl Sandburg, winner of two Pulitzer Prizes, wrote,
When a nation goes down, or a society perishes, one condition may always be found; they forgot where they came from. They lost sight of what had brought them along (Hyatt, 1726: The Year that Defined America, 11).
In her book, The Rewriting of America’s History, Catherine Millard documents just how pervasive is this crusade to rewrite America’s history. She points out that it is being carried out, not only in the rewriting of textbooks, but also in the rewriting and reinterpretation of national monuments. She writes,
It is happening through the rewriting and/or reinterpretation of America’s historical records: in our national parks, monuments, memorials, landmarks, enshrines, and churches. In some cases, changes are subtle, and in others, blatant. It’s done through removal of key historic pieces that do not support the current ungodly bias (Hyatt, 1726: The Year that Defined America, 9-10).
Knowing the Past is the Key to America’s Future
Slavery is certainly a blight on America’s history. However, because of what happened in 1726, America is not defined by what happened in 1619. 1726 was the defining year for America.
In 1726 a great, spiritual tsunami began that eventually engulfed all of Colonial America in a flood of religious fervor. This Great Awakening, as it has been called, laid the spiritual, moral, and philosophical foundation for a great new nation. It released anti-slavery sentiments that led to an abolition movement that eventually brought slavery on this continent to an end. 1726 was, in fact, the year that defined America.
Understanding 1726 is, therefore, the key to understanding America. It is also the key to America's future, for as George Orwell said in his classic book, 1984, "Whoever controls the past, controls the future" (Hyatt, 1726: The Year thatDefined America, 10).
Remembering Our Heritage
At the present time, America is as divided, perhaps, as she has not been since the Civil War. And although demographics and culture have changed, the solution remains the same. We must remember our heritage. We must remember 1726.
In the same way that God spoke to ancient Israel in a critical time of national danger and spiritual apostasy, God is calling America to remember her heritage. The call to Israel is recorded in Isaiah 51:1-2:
Listen to Me, you who pursue righteousness and seek the LORD: Look to the rock from which you were cut and the quarry from which you were hewn; look to Abraham your father and Sarah, who gave you birth. When I called him he was only one man, and I blessed him and made him many.
If the America of Washington, Jefferson, and Lincoln is to survive, we must remember our heritage. The needed change is not going to come as a result of a new church program, a new church crusade, a bigger and better choir, a new cathedral, or the next election. It will come as we remember 1726 and cry out to God, “Do it again, Oh Lord!”

This article was derived from Dr. Eddie Hyatt's latest book, 1726: The Year that Defined America, available from Amazon and his website at www.eddiehyatt.com. In this book, Dr. Hyatt documents how the Great Awakening in Colonial America had a direct bearing on both the founding of the United State and the ending of slavery on this continent. He has founded the “1726 Project” to spread this strategic and timely message across the land.